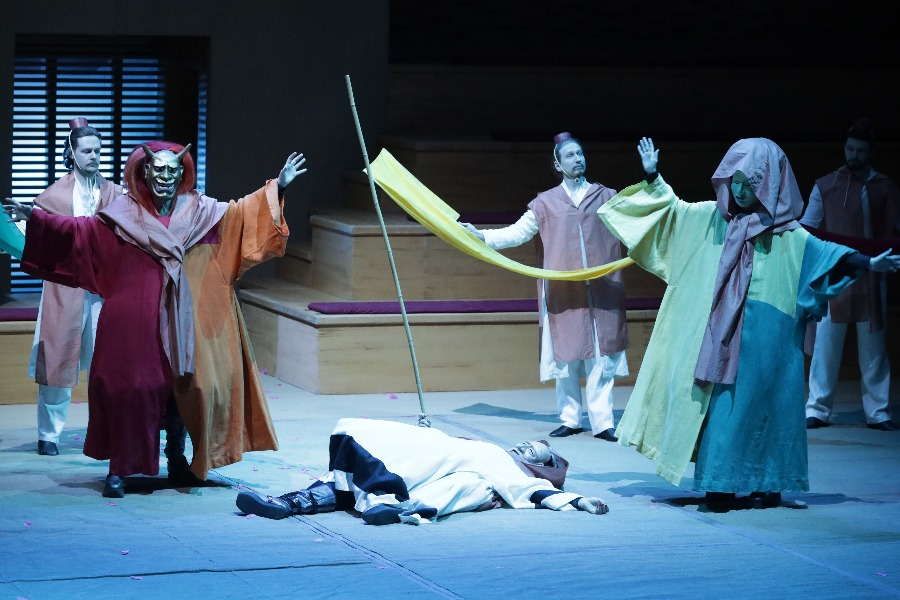 Translation of arias, duets, ensembles and chorus by Susanna Tsiryuk;
translation of dialogues by Maria Levin

Overture
Sarastro the wise man is reading a wonderful book called The Magic Flute to some children: “In a far-off land Prince Tamino is living a dull and weary existence when his father the King pointedly tells him it is time for him to do something with his life. The knights blindfold Tamino, give him a bow and arrows and send him on his way…”

Act I
Prince Tamino is attacked by a huge and terrifying serpent and he loses consciousness. The Three Ladies appear and they kill the snake. Tamino is saved from death, while his saviours argue as to who will protect the youth. Failing to come to an agreement they leave to tell their sovereign, the Queen of the Night. Tamino awakes and sees a strange man –Papageno the bird catcher. He catches birds for the Queen of the Night. The Prince assumes that Papageno had saved him and Papageno does not deny it. But Papageno will be punished for lying: the Three Ladies return and place a mask on him with a gag. Tamino is given a portrait of an incredibly beautiful girl. Tamino falls in love with her immediately. The Ladies tell him that Pamina has been abducted by the powerful and cruel Sarastro. The Queen of the Night appears amid thunder and lightning. She begs Tamino to save her daughter and as a reward promises to bless their union. The Three Ladies remove Papageno’s mask and make him swear that he will never lie again. They give Tamino a magic flute that will help him overcome any obstacles on the way, and to Papageno they give bells that can delight the heart. Together with the Three Boys, Tamino and Papageno set out on their way.
At Sarastro’s palace three slaves are mocking the Moor Monostatos for having let his captive escape. Suddenly Monostatos appears with the fugitive, and he sends everyone away so he can be alone with Pamina. Meanwhile, Papageno sneaks into Pamina’s room, and when Monostatos comes in to kiss her they unexpectedly meet and flee from each other.
Distractedly, Pamina calls for her mother, but then she awakes and remembers what has happened and is left in despair.
Meanwhile Papageno returns to Pamina and explains that he has been sent by her mother, the Queen of the Night. Papageno tells the girl of Prince Tamino’s love for her –Pamina is perturbed by the very word “love”. Together they flee. On the way Papageno complains that he has no beloved.
The Three Boys lead Tamino to Sarastro’s temple. A priest comes out of the temple of wisdom to meet him. He informs Tamino that the Queen of the Night has deceived him: Sarastro is no deceitful magician, but a wise and just ruler who has abducted Pamina at the decree of the gods. This is all that the priest can tell Tamino. The Prince will know the whole story only after the blessing in the temple.
The youth asks the gods to tell him if Pamina is alive. Mysterious voices reply that she is safe and sound. The delighted Tamino plays the magic flute in reverence to the gods. Papageno’s reed-pipe sounds in response. Papageno and Pamina also hear the flute being played by Tamino and hurry to him, but they are stopped by the Moor Monostatos who has followed them. Papageno’s magic bells save the fugitives. Hypnotised by the music the Moor falls asleep. But Sarastro himself appears before Pamina and Papageno. Pamina, who has decided to tell only the truth, admits to the sorcerer that she tried to flee, and complains at Monostatos’ solicitation. Sarastro feels pity for her. He knows that she is in love with Tamino. And Monostatos, who has since managed to seize Prince Tamino, receives sixty lashes instead of a reward. But at Sarastro’s command Tamino and Pamina must be separated as the Prince and his companion Papageno must face further trials.
The priest and the orator blindfold Tamino and Papageno and lead them into the temple.

Act II
Tamino and Papageno are left alone in pitch darkness. Thunder can be heard. Seeking a way out, the two friends meet the orator and priest carrying torches. They promise happiness to Tamino and Papageno (who will find his life partner here) on the condition that both enter the kingdom of wisdom and love. To do so they must pass a test of silence. The Three Ladies appear, trying to make Tamino and Papageno speak. Papageno is about to speak, but Tamino stops him. The priest and orator return, and the Three Ladies disappear amid a peal of thunder which makes Papageno quake. The orator congratulates Tamino on passing his first test.
Monostatos steals upon Pamina, who is asleep in the summer house in the garden, in order to kiss her. But the sudden appearance of the Queen of the Night forces him to hide. The Queen of the Night gives her daughter a dagger and tells her she must kill Sarastro, threatening to denounce her if she does not obey. After the Queen of the Night disappears, Monostatos, who has heard everything, once again tries to solicit Pamina’s love. On receiving a vehement rejection he tries to kill her. She is saved by the sudden appearance of Sarastro. The magician drives out Monostatos, who leaves to seek the protection of the Queen of the Night, while Sarastro tells Pamina her mother is waiting in despair and she herself will find happiness with Tamino.
The priest and the orator prepare Tamino and Papageno for their second test – separation. They order them to be silent, but the babbling Papageno cannot keep quiet and complains of thirst. As a punishment an old woman appears. She gives Papageno some water; she says she is eighteen years old and is in love with him. In horror Papageno throws water in the old woman’s face and she flees to the peal of thunder.
The Three Boys bring Tamino and Papageno food and give them their musical instruments. In silence Tamino takes the flute and Papageno starts to eat. Even when Pamina comes Tamino remains silent. Pamina tries to find out what has happened from Papageno, but he too remains silent. Stunned, the girl falls into despair and wants to kill herself.
However, the trials must continue no matter what. Papageno and Tamino have to go but Papageno cannot tear himself away from the food. Tamino tries to gain his attention by forceful means but in the end he abandons his attempts and leaves. The abandoned Papageno is surrounded by lions. Frightened to death he calls Tamino, who by playing the flute saves the luckless bird-catcher. Papageno from now on promises to listen to Tamino’s every word.
As a result of the trials Papageno finds himself imprisoned. He is lonely, afraid and hungry. He cries in despair. He tells the orator that he prefers earthly pleasures to heavenly ones. His wish is miraculously fulfilled and he is given a glass of wine. But Papageno is still not happy: he needs someone to love. Once again the old woman appears before Papageno. Marrying her is the only way to gain his freedom. Papageno agrees –and at that moment the old woman transforms into the beautiful young Papagena. Papageno rushes to her, but the orator stands between them and Papageno falls to the ground.
Pamina, having lost her faith in Tamino’s love, wishes to stab herself with the dagger given to her by her mother, but the Three Boys prevent her from destroying herself, convinced that Tamino loves her. They help her find her beloved and Pamina tells Tamino the secret behind the magic flute. They are left to face the trial of fire and water. Embracing each other, to the sounds of the magic flute Tamino and Pamina travel this arduous and dangerous path. Their trials are at an end.
Papageno, too, longs for his beloved, and in despair he thinks of killing himself. The Three Boys come to his aid. Taking their advice, he uses the magic bells to bring back Papagena. Both are happy.
Then the Queen of the Night and Monostatos, to whom she has promised her daughter, and the Three Ladies prepare to attack Sarastro’s temple and destroy it. But Sarastro discovers the plot and the Queen of the Night and her suite all disappear into darkness. Light, wisdom and love are triumphant.

The opera Die Zauberflöte has enjoyed ten years of unfailing success at the Concert Hall of the Mariinsky Theatre. Mozart's singspiel is performed in Russian. And rightly so: as well as the singing, the opera contains many spoken dialogues, and it is much easier to get to the root of the plot's peripeteia when each word can be understood. This is far from a departure from the original, indeed the reverse, in a sense coming closer to it, because this masterpiece created by Mozart and Schikaneder more than two centuries ago was incredibly democratic. At the Theater an der Wien, where the premiere of Die Zauberflöte took place, foreign operas were also performed in translation in the language that everyone could understand – German.

It is the "democratic" nature and chamber-like "comfort" of the Mariinsky's Zauberflöte along with the remarkable performing skills of the musicians that afford this production a particularly beguiling quality. The singers may find themselves literally a handshake away from the audience, while the audience – even the very youngest – will be at the heart of the action right on the stage.

Most children aged about eight and above don't just "sit patiently" throughout the three hours of Die Zauberflöte in the auditorium, they carefully follow the plot. What is more, there on the stage there are three mysterious ladies dressed in black, three delightful boys in white, a dragon, a lion, a beautiful girl in a white dress with an umbrella, some suspicious "unreal" old woman, a storm with thunder and lightning and a triumphant ceremony... And the adults in the audience can contemplate the deep philosophical content of this magical tale and the magnificence of its music.