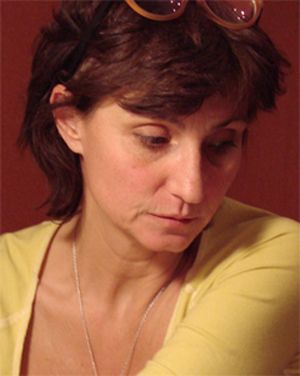 Born in Switzerland. Studied costume design, dressmaking and sewing. In 1980 she opened her own atelier in Geneva, where she creates costumes for a number of theatres including the Vidy theatre in Lausanne, the Théâtre de Carouge, the Comédie de Genève, the Grand Théâtre de Genève, the Revue genevoise theatre and other theatre and circus companies in Switzerland, France and Italy. Regularly works with Roland Deville, Giles Lambert, Jean-Claude Marais and Eric Jeanmonod, taking part in the development of designs and the clothing construction process. As a costume designer she has been involved in productions by Matthias Langhoff, Manfred Karge, Claude Stratz, François Roche, Omar Porras, Marc Liebens, André Steiger, Dominique Catton, Hervé Loichemol, Robert Bouvier and Robert Sandoz. She has designed costumes for Rosella Hightower in a production of Harold and Maude, for dancers of Guilherme Botelho’s company Alias and Noemi Lapsezon’s dance company, including a production of Étrange L’amour with Gabriel Garrido. Regularly works at the Avignon Festival and the Baroque Opera Festival in Ambronay as well as the Wagner Festival in Geneva (the opera Der Fliegende Holländer, 2013). In 2013 she was the Principal Costume Designer for productions at the Grand Théâtre de Genève including Honegger’s Les Aventures du roi Pausole and Stravinsky’s Le Sacre du printemps with choreography by Andonis Foniadakis. Moreover, Desingy has created exhibits and costumes for the Musée ethnographique in Geneva, Geneva’s Musée d’art et d’histoire and the Swiss National Museum in Prangins.
Since 2003 she has collaborated with Alain Maratrat. She has worked on a production of his first version of Peer Gynt in Geneva, L’Argument at the Vidy, Three Sisters in Italy, Night of Kings in Berlin, Maria Stuarda in France and the operas Il viaggio a Reims by Rossini (2005), The Love for Three Oranges by Prokofiev (2007) and Die Zauberflöte by Mozart (2008) at the Mariinsky Theatre.
In 2006 she taught a costume design course at the University of Venice.