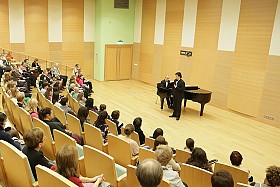 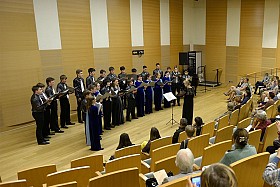 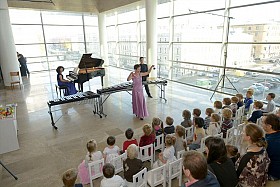 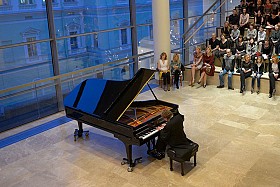 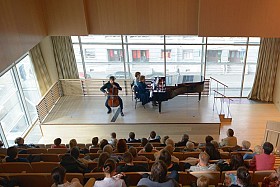 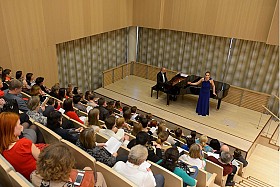 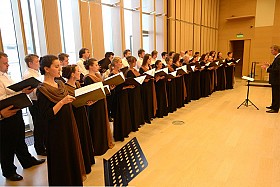 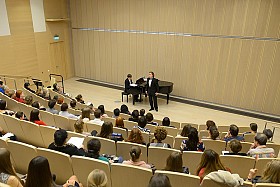 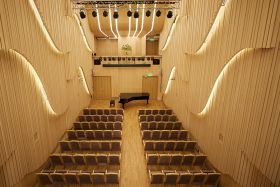 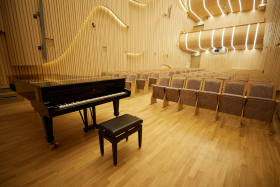 CHAMBER VENUES OF THE MARIINSKY II

The Mariinsky Theatre is a theatre and concert complex that can host not just major productions but incredibly diverse and varied events for smaller audiences as well. It is specifically for the latter such events that the complex has five dedicated chamber venues that have been named after great composers whose lives and works are connected with the theatre – Modest Musorgsky, Sergei Prokofiev, Igor Stravinsky, Rodion Shchedrin and Sergei Rachmaninoff.

The capacity of these venues ranges from one hundred to one hundred and eighty seats. This layout offers the opportunity for closer contact between performers and audiences, facilitating not just concerts of instrumental and vocal music but lectures, interactive sessions and film screenings too. According to the theatre’s Artistic and General Director Valery Gergiev, it is young people who should make up the greater part of audiences at the chamber venues: “Our main target audience is students, though they now have a rival in the form of school pupils. And it would be good if school pupils had rivals of their own – pre-schoolers.” It is not just the audiences of the chamber venues but also the performers there themselves that are to be "young". As maestro Gergiev states, the chamber venues will see performances by pupils from music schools not just in St Petersburg but also in Vyborg, Pskov, Veliky Novgorod and other Russian towns and cities. The new theatre’s chamber venues serve educational purposes, in which both maestro Gergiev and all of the theatre’s creative teams have been actively engaged in recent years.

The Prokofiev Hall is located on the first underground floor of the Mariinsky II and generally hosts performances by pianists. It is not by chance that the Hamburg-based company Steinway & Sons was specially commissioned to produce a unique instrument for this chamber music venue. As well as pianists, the Prokofiev Hall hosts performances by both young and established soloists of the Mariinsky Orchestra in solo recitals and in ensembles alike.

The Stravinsky Foyer, a chamber venue in the public area of the Mariinsky II, is located on the fourth floor. Here it is very light and airy, but the truly special feature of this concert space is the high step-like rows of audience seating. In addition to concerts, there are also interactive educational programmes for children and young people, Sunday lectures and performances for audiences of all age categories in the Stravinsky Foyer.
Thanks to the unique way the space has been organised, the bright and commodious Stravinsky Foyer is an ideal venue for theatre programmes.
Notably, the huge panorama windows of the foyer look over Kryukov Canal towards the house in which the great composer spent his childhood years.

The Shchedrin Hall is in great demand as a chamber venue. Like the Stravinsky Foyer, it is located on the fourth floor of the new theatre; this hall plays host to concerts, film screenings, lectures and music activities for both adults and the very youngest theatre-goers.
This venue is “very similar to an ultra-contemporary auditorium with the steep rise from the stalls and the huge windows that soar upwards from the floor to halfway up to the ceiling.
Through the windows, from below one can see – but not hear – life passing by on Offitserskaya Street which, combined with musical gems, creates a mood of peculiar contemplativeness.” (Vecherny Peterburg).
The opening of the hall in summer 2013 was attended by Rodion Shchedrin himself, whose works are broadly represented on the playbill of the Mariinsky II. His operas are performed here – The Lefthander, specially commissioned for the inauguration of the new theatre, as well as Dead Souls, The Enchanted Wanderer, Boyarina Morozova (in concert) and Not Love Alone. The theatre’s ballet repertoire includes the composer's Anna Karenina, The Little Humpbacked Horse and Carmen-Suite.
In line with Valery Gergiev’s vision, the Shchedrin Hall hosts performances by students of the Mariinsky Academy of Young Opera Singers who are preparing for their debuts on the main stage. Here there are also video-screenings of the theatre’s productions.

The Rachmaninoff Hall is located in the south wing of the Concert Hall. This venue is intended for chamber music concerts – by both young musicians and by acclaimed virtuosos alike – as well as for choral and children's programmes. The interiors of the Rachmaninoff Hall have been executed in the same colour scheme as the "big" stage, and the design of its acoustics was greatly assisted by Yasuhisa Toyota, who worked on the Concert Hall proper. This venue has a Steinway & Sons grand piano installed.

In the words of Valery Gergiev, the names of the composers in whose honour the chamber venues have been named “speak for themselves. These halls should embody a living link with these composers. The music of Prokofiev, Musorgsky, Rachmaninoff and Stravinsky is alive in our theatre, and Rodion Shchedrin is with us today.”