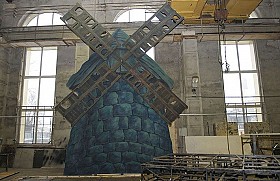 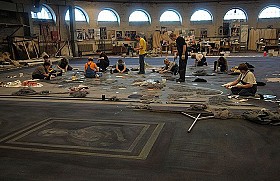 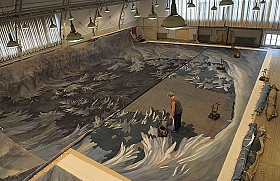 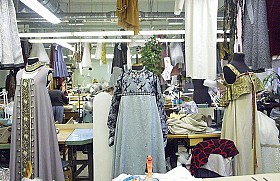 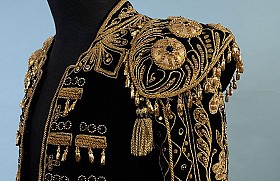 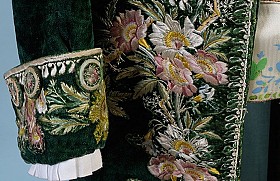 The Set Workshops of the Board of the Imperial Theatres were established following a special decree by Emperor Alexander II, issued in 1874. Together with acclaimed performers, directors and conductors, the employees at the workshops – decorators, machinists, painters, costumiers and sculptors – were styled “artistes of the Imperial Theatres” at the time. The Set Workshops were located both in the theatre itself and outside it. The building of the workshops at 20 Bolshaya Podyacheskaya Street, where sets are produced to this day, won first prize in 1882 at an exhibition in Vienna.
In 1900 Viktor Schröter’s design for the Set Hall and Atelier of the Board of the Imperial Theatres was built on Alexeyevskaya Street (now 20 Pisarev Street), to be used for the creation of sets. The building was destroyed by fire on 5 September 2003 together with some of the sets of Mariinsky Theatre productions. In 2006, the Concert Hall of the Mariinsky Theatre was built on the site, but the façade of the Set Hall on Pisarev Street that survived the fire was carefully preserved in the architecture of the new building.
In 1998, the Artistic Production Complex of the State Academic Mariinsky Theatre was founded from the artistic workshops; this is, today, the largest enterprise in Russia and Europe that prepares sets and designs for theatre productions and other cultural and artistic events.
Two major production units form the complex: one for sets and one for costumes. These departments employ over three hundred highly qualified specialists, while the school of theatre design has been preserved and new technology is actively employed.

The set department has at its disposal:
• three painting halls where five teams of theatre artists are employed;
• a section that constructs the sets, props and stage furniture from various materials;
• a section that makes electronic equipment and stage effects;
• a specialised construction and technology office that produces blueprints of sets based on the load and the materials and which develops production technology.

Over many years, much experience has been gained of making sets and props from plastic casting.
In early 2004 the complex opened a new production facility of 5000 square metres (7 Kievskaya Street). This includes all sections of the Set Production Department. When it opened, the complex also received ultra high technology equipment. This unique new complex has at its disposal not just spacious premises where it is convenient not just to assemble the sets, but where there is also a trial stand similar in scale to the stage of the Mariinsky Theatre, where the sets are installed and lit.

The scale of the complex means it can not only satisfy all the needs of the Mariinsky Theatre but also carry out orders for other organisations and private individuals.