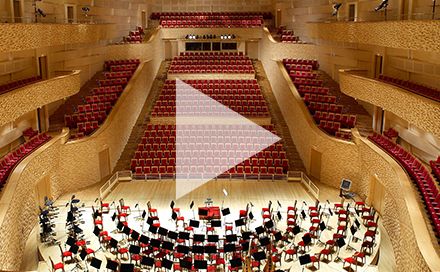 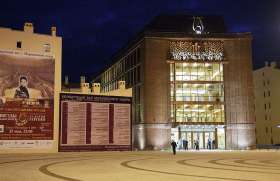 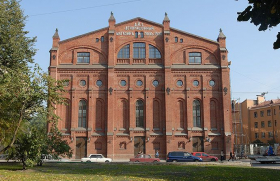 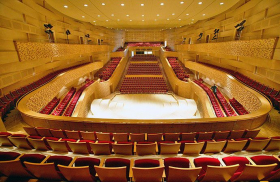 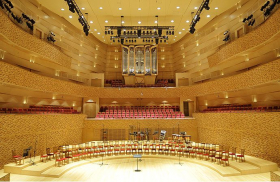 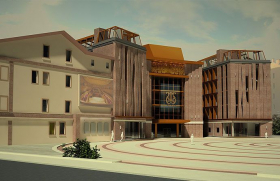 The building of the Concert Hall has historic connections with the Mariinsky Theatre. In 1900 the Set Workshops and Hall of the Board of the Imperial Theatres, which came under the authority of the Mariinsky Theatre in 1917, was built to a design by Viktor Schröter on this site. For over a century unique sets were created in the workshops for numerous productions, many of which survive in the theatre’s repertoire to this day. In September 2003 a fire broke out in the Set Workshops that destroyed almost all the costumes and sets being stored there and that damaged the building so much that it seemed it would be impossible to restore it.

Maestro Gergiev therefore took the decision to build a new Concert Hall on the site of the old workshops, fully retaining the historic façade which had miraculously survived the fire. At the same time, a new façade was planned for the opposite end of the site opening onto Decembrists’ Street as a unique symbol of architecture of the 21st century. Xavier Fabre, the architect of the new Concert Hall, believes that the building’s architectural features had to blend naturally with elements “of this century as well as of the last century”.

On 29 November 2006, the presentation of the new Concert Hall of the Mariinsky Theatre took place in the presence of President Vladimir Putin, Minister of Economic Development German Gref, Minister of Finance Alexei Kudrin, Mayor of Moscow Yuri Luzhkov and Governor of St Petersburg Valentina Matvienko.

The opening of the Concert Hall has proved yet another historic date in Russian theatre history. It is the only theatre and concert venue of its kind in Russia, designed according to the very latest developments in construction and purpose-built to host concert programmes. With regard to technology and acoustics, the work of Mr Toyota, the new hall ranks alongside the world’s finest concert venues, such as the concert halls in Lucerne, Sapporo and Birmingham, Berlin’s Philharmonie, Leipzig’s Gewandhaus and the Disney Hall in Los Angeles. In the new hall, the stage can be transformed for the desired effect according to the programme for the evening. The controls for the individual blocks of the stage plane-table mean that the positions of orchestral groups can be varied, or an orchestra pit created. The hall can also be used for stage performances of operas and ballets.

At the opening evening of the Concert Hall there were performances by both stars of the Mariinsky Theatre and acclaimed instrumentalists including the violinists Vadim Repin and Maxim Vengerov and the pianist Lang Lang.

This event would not have been possible but for the huge support given by many private individuals and companies who believed in this project and contributed serious resources and efforts to bring it to life.

In April 2007 the Concert Hall opened its doors to the general public. Valery Gergiev timed the Mahler Symphonies series featuring the Mariinsky Theatre Symphony Orchestra to coincide with the event. This series was performed in full as part of the XV International Stars of the White Nights Festival and celebrated one hundred years since the memorial concerts by the great Austrian composer and conductor in St Petersburg.

Here, in the Concert Hall, Rodion Shchedrin’s concert opera The Enchanted Wanderer was performed for the first time in Russia, and the first staged version of the opera was also held here.

In spring 2009, reconstruction began of a complex of buildings affiliated to the Concert Hall of the Mariinsky Theatre, and following reconstruction these will house a restaurant, a café, a music shop and rehearsal studios.

In summer 2009 an organ made by the Alfred Kern et fils company (Strasbourg) was installed in the Concert Hall; the company was founded in 1953 by Daniel Kern’s father Alfred Kern with the direct support and involvement of Nobel Prize for Peace winner Dr Albert Schweizer. The unique skills of Alfred Kern et fils craftsmen have been combined with the experience and traditions of French and German organ construction that go back centuries. The organ at the Concert Hall is the first French instrument to be built in Russia for a century, and it is different to organs built by German craftsmen because of the particular nature of its construction and the character of the sound it produces, making it possible to give full and detailed performances of both French and German organ music. The inauguration was held on 1 October 2009. (Organ Disposition)

The foyer of the Concert Hall is in constant use as an exhibition space. The artistic exhibitions are regularly changed, allowing those attending concerts to add visual impressions to their musical ideas and discover interesting works from various genres and in different styles. Here you can see works by acclaimed artists as well as children’s drawings that directly reflect the responses to operas and ballets at the Concert Hall of the very youngest audiences who form our Young Theatre-Goers’ Academy.

“The Mariinsky Theatre Concert Hall is a natural blend of history and the present day. It possesses marvellous acoustics…” (Il Giornale)

“The acoustics ensure a cantilena quality of sound and a clarity of the woodwind section which does not fade away, rather it dissolves into a space offering a perfect view from any vantage point (…) magnificent, full of light and warmth.” (Le Figaro)

“French architect Xavier Fabre has done a wonderful job of combining the old and the new. The acoustics were created by the renowned Yasuhisa Toyota, most famous for his concert hall in Los Angeles (…) Toyota has dealt with the task brilliantly: the balance of sound is staggering!” (The New York Times)

“The Concert Hall comes to life from the light movement of sound waves that are reflected from floor to ceiling. It seems that the hall itself has become an instrument – a Stradivarius violin.” (Süddeutsche Zeitung)