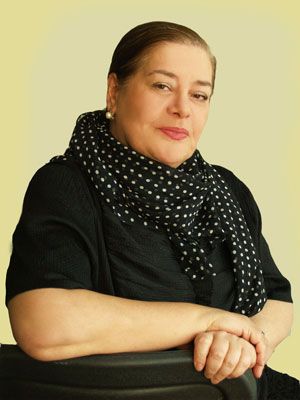 Larisa Abisalovna Gergieva is Artistic Director of the Mariinsky Academy of Young Opera Singers, the State Opera and Ballet Theatre of the Republic of Northern Ossetia-Alania (Vladikavkaz) and the Digora State Drama Theatre.

Larisa Gergieva has long been a major cultural figure in vocal music internationally. She has outstanding musical and organisational skills and is one of the finest vocal accompanists in the world as well as being the director and a jury-member of numerous prestigious international vocal competitions. In the course of her artistic career, Larisa Gergieva has trained ninety-six prize-winners of all-Union, all-Russian and international competitions. Her repertoire includes over one hundred operas which she has rehearsed for various theatres throughout the world.

During her years at the Mariinsky Theatre, Larisa Gergieva has appeared as Principal Concert-Mistress both at the theatre and at the Concert Hall on productions of Les Contes d’Hoffmann (2000, Stage Director – Marta Domingo), The Golden Cockerel (2003), The Stone Guest (semi-staged version), The Snow Maiden (2004), Ariadne auf Naxos (2004 and 2011), Il viaggio a Reims, The Tale of Tsar Saltan (2005), Die Zauberflöte, Falstaff (2006), The Love for Three Oranges (2007), Il barbiere di Siviglia (2008 and 2014), Rusalka, The Opera of How Ivan Ivanovich Quarrelled with Ivan Nikiforovich, The Marriage, The Lawsuit, Shponka and His Aunt, The Carriage and May Night (2009), The Station Master (2011), My Fair Lady (2012) and Don Quichotte (2012), Eugene Onegin, Salammbô, Sorochinsky Fair and The Taming of the Shrew (2014), La traviata, Moscow, Cheryomushki, Into the Storm, L’italiana in Algeri and The Dawns Here Are Quiet (2015). In the 2015-2016 season as music director at the Mariinsky Theatre she prepared the operas La Cenerentola, The Gadfly, Colas Breugnon, Quiet Flows the Don, Anna, White Nights, Maddalena, Orango, Letter from an Unknown Woman, The Station Master, La fille du régiment, Not Love Alone, Bastien und Bastienne, The Giant, The Christmas Tree, The Boy Giant, An Opera about Porridge, a Cat and Milk and Scenes from the Life of Nikolenka Irteniev.

At the Mariinsky Academy of Young Opera Singers, talented performers are given the unique opportunity to combine intense studies with performances on the hallowed stage of the Mariinsky Theatre. Larisa Gergieva has succeeded in creating the right conditions to develop singers’ talents. Her deft approach to any given performer’s personality produces miraculous results: graduates of the Academy have performed at the world’s leading opera venues, taken part in the theatre’s tours and appeared in private engagements. Not a single premiere at the Mariinsky Theatre takes place without the participation of the Academy’s singers.

On thirty-two occasions Larisa Gergiev has been voted best accompanist at various vocal competitions, among them the BBC International Competition (Great Britain), the Tchaikovsky Competition (Moscow), the Chaliapin Competition (Kazan), the Rimsky-Korsakov Competition (St Petersburg) and the Diaghilev Competition (Perm) to name but a few. She appears at such prestigious venues as Carnegie Hall (New York), La Scala (Milan), Wigmore Hall (London), La Monnaie (Brussels), the Grand Théâtre (Luxembourg), the Grand Théâtre (Geneva), the Gulbenkian Center (Lisbon), the Teatro Colón (Buenos Aires), the Great Hall of the Moscow Conservatoire and the Great and Small Halls of the St Petersburg Philharmonic. With the theatre’s soloists as well as soloists from the Academy of Young Opera Singers she has toured to Argentina, Austria, Great Britain, France, the USA, Canada, Germany, Poland, Italy, Japan, South Korea, China and Finland. She has taken part in prestigious music festivals in Verbier (Switzerland), Colmar and Aix-en-Provence (France), Salzburg (Austria) and Edinburgh (Great Britain), Shalyapin festival in Kazan (Tatarstan).

For over ten years Larisa Gergieva has held seminars at the Russian Union of Theatre Workers for Russian concert-masters of Russia’s opera houses and music theatres about teaching methods and training singers for the stage.

Since 2005 she has been Artistic Director of the State Opera and Ballet Theatre of the Republic of Northern Ossetia-Alania (Vladikavkaz). Over this period, the theatre has staged some twenty-five productions including the ballet The Nutcracker and the operas Carmen, Iolanta and Manon Lescaut, Il trovatore (in which Larisa Gergieva appeared as the Stage Director). The highlight were the productions of Handel’s opera Agrippina and three one-act operas by contemporary Ossetian composers based on Alanian eposes starring soloists of the Mariinsky Academy of Young Singers.