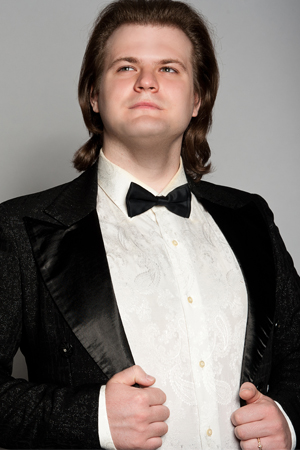 Igor Barbakov was born in Kazan. In 2012 he graduated from the Kazan State Zhiganov Conservatory. Participated in productions of the conservatory’s Opera Studio, appearing in such roles as the Prince (The Love for Three Oranges), Eisenstein (Die Fledermaus), Don Basilio (Le nozze di Figaro) and Boni and Edwin (Die Csárdásfürstin) among others.

In 2013 he was appointed a soloist of the Ğabdulla Tuqay Tatar State Philharmonia, in 2014 becoming a soloist with the Kaliningrad Regional Musical Theatre. There he performed the roles of Lykov (The Tsar’s Bride), Lensky (Eugene Onegin), Mozart (Mozart and Salieri), Almaviva (Il barbiere di Siviglia), Eisenstein and Alfred (Die Fledermaus) and the tenor role in Mozart’s Requiem.

Has been a soloist with the Mariinsky Academy of Young Opera Singers since 2016.