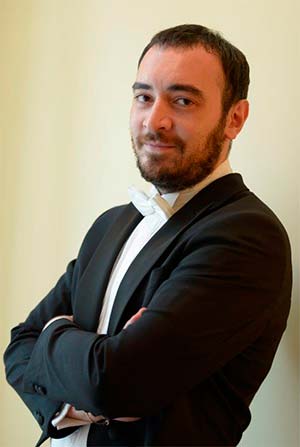 • People’s Artist of the Republic of North Ossetia–Alania (2022)

Zaurbek Gugkaev was born in Vladikavkaz. In 2004 he graduated from the Vladikavkaz School of Arts, and in 2011 from the St Petersburg Conservatory where he studied conducting under Professor Leonid Korchmar.

At the Mariinsky Theatre Gugkaev conducts operas from the classical European repertoire (Mozart’s Le nozze di Figaro and Die Zauberflöte and Rossini’s Il barbiere di Siviglia) as well as from the Russian repertoire (Tchaikovsky’s Eugene Onegin and Iolanta and Rimsky-Korsakov’s The Golden Cockerel) in addition to symphony concerts. He has conducted a number of Mariinsky Theatre premieres in recent seasons, among them Weinberg’s The Idiot, Klinichev’s The Cossacks, Banevich’s The Story of Kai and Gerda (2016), Frid’s The Diary of Anne Frank, Butsko’s The Diary of a Madman and Shchedrin’s Not Love Alone (2017).

Zaurbek Gugkaev also conducts concert performances of operas in subscriptions of the Mariinsky Academy of Young Opera Singers and appears at the theatre's branch in Vladikavkaz.