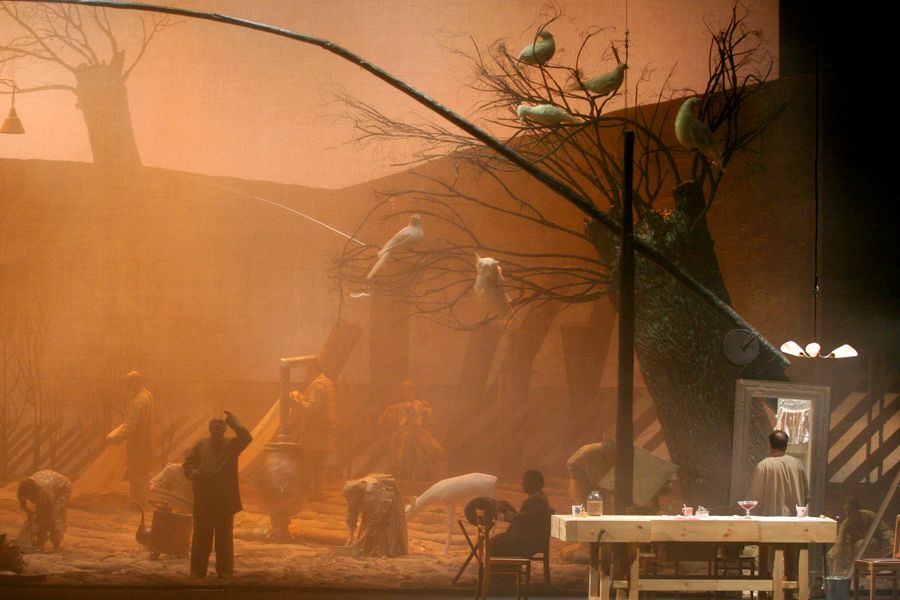 A life for the Tsar

Act I
Ivan Susanin, his daughter Antonida and his adopted son Vanya are living happily among close friends and family in a remote part of Russia. Antonida is waiting for her fiancé Bogdan Sobinin to return from fighting enemies. Sobinin brings joyful news of Russia’s victories and asks Susanin to postpone his marriage to Antonida no longer. But Susanin considers the time is not right for celebrations and happiness: there is no peace and the future is uncertain. Only the news that there is a young Tsar stirs up the people and gives Susanin and his family hopes for the future.

Act II
The enemies assemble at a banquet in a magnificent hall. They are all anticipating an easy victory. News of the young Tsar arrives and the feast ends. The decision is made to send a detachment and capture the Tsar.

Act III
The Susanin family is looking forward to a happy future, with preparations for the wedding and guests arriving. The beauty and isolation of their lives is suddenly disturbed by the arrival of the foreign detachment. Their persuasions, threats, blackmail and bribery reveal to Susanin their dark plan – they intend to discover the Tsar’s secret hiding-place. Then Susanin makes a courageous decision: he will leave with the enemies. But he will lead them not to the Tsar but deep into an impassable forest.
In despair at her father’s departure, Antonida is unmoved by both her friends’ arrival and her fiancé’s promise to find her father. Sobinin assembles the villagers and they set off to follow Susanin.

Act IV
Night. Sobinin attempts to follow the enemies and Susanin, but a snow-storm has obliterated their tracks.
Vanya manages to convey the danger that threatens the Tsar – at dawn the enemies will discover Susanin’s betrayal and find the true path that leads to the Tsar. Everyone prepares to defend themselves.
The enemy detachment, having been led on a false trail through the impenetrable forest, collapses exhausted. Susanin alone has the energy to go on. Knowing death is close, he recalls with courage all his family and bids them farewell. The enemies begin to comprehend their position and demand an explanation from Susanin. Susanin admits his desperate decision to sacrifice himself. Realising death is unavoidable, the enemies kill Susanin in fury.

Epilogue
Deeply mourning the loss of Susanin, his family arrives at festivities to celebrate the saving of the young Tsar.

A Life for the Tsar is not the first opera created in Russia, but it is the first Russian opera. That is no pun, but rather the essence of a turnabout that took place in in the history of Russian music following the premiere of this operatic masterpiece on 27 November 1836 at the Bolshoi (Stone) Theatre (the site is now occupied by the building of the St Petersburg Conservatoire). Operas had been written by Russian composers long before Glinka: The Carriage Accident by Vasily Pashkevich, The Miller Who Was a Wizard, a Cheat and a Matchmaker by Mikhail Sokolovsky and The Novgorod Hero Boyeslayevich and The Coachmen at the Horse Stage-Post by Yevstignei Fomin. But even Russian plots and the timid and enlightened pathos of these activities could not shed the genre of opera of its status as an imported product where everything – the dramaturgy, musical language and manner of singing – remained true to the “refined” Italian framework. Moreover, in the 18th century opera remained an entertainment for high society..

The 19th century was another affair. Russia entered the 19th century as a major European power, confirming its new status by freeing Europe from Napoleon’s expansionism. A great power required great art. For Russia the time had come to declare itself not just through its economic growth and victories in conflicts and politics. The time had come to promote Russian art, which meant not just art produced in Russia but specifically Russian art, at the same time original and of European significance.

All of this, without doubt, was also felt by Mikhail Glinka when he was searching for a plot for his “grand dramatic opera”. The story of the achievement of a simple peasant from Kostroma who sacrificed himself in order to save the life of the young Tsar Mikhail Fyodorovich and rescue Russia from foreign invaders was perfectly suitable for an expansive and heroically patriotic drama; in the plot there is war, there is love, there are scenes of folk life and there is the contrasting image of the culture of the invaders. In the plot, it was unexpected for contemporaries to see that a weapon of victory in war was not the talents of a crowned military leader but rather the courage of a provincial simple man. Ultimately, the public was shocked by the world that Glinka brought onto the stage of the Imperial theatre – peasant life, portraits of simple people and the poetry of the Russian way of life. And the corresponding musical language: Russian folkloric melodies, heterophonic choral polyphony and Orthodox prayers. Folk heroes and folk music had descended to mere amusing pastoral scenes, but were in no way permitted in a serious musical drama, on stage embodying the idea and the spirit of the triad “Orthodoxy, Autocracy, and Nationality”, only recently accepted as a weapon to defend the national idea: the folk heroine Susanin perishes, saving not only the Russian autocrat but also Russian Orthodoxy from the Catholics of a different creed.

In the new production of  A Life for the Tsar (2004) the Mariinsky Theatre turned to the original version of the opera with the libretto by Baron Rosen. Entire generations of audiences had become accustomed to Sergei Gorodetsky’s Ivan Susanin in which the ideological accents and motivation behind the characters’ actions are mixed up and adapted to the conceptual framework of Soviet opera. The original libretto returns the Autocracy and the Orthodoxy to the opera – the components of the famous triad in which, according to stage director and production designer Dmitry Chernyakov “the Russian conscience recognised itself”. This is why Glinka’s A Life for the Tsar came to be a “true expression in the eternal consciousness of the Russian soul and Russian fate” (Dmitry Chernyakov). But in this production the stage director also risked altering the ideological accents, driving a wedge into “the Russian triad” albeit from the other side – revealing in the opera problems of civil society, human rights, personal responsibility and collective morality.
Vladimir Rannev