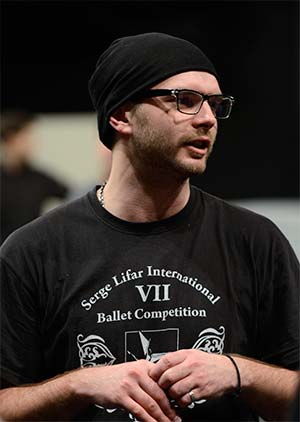 As a choreographer, Ilya Ustyantsev worked on productions of The Lefthander (2013), Eugene Onegin (2013), The Queen of Spades (2015), A Christmas Tale (2015) (all staged by Alexei Stepanyuk), L’elisir d’amore (2013) (staged by Alexander Petrov), Adriana Lecouvreur (2017) (staged by Isabelle Partiot-Pieri), The Diary of Anne Frank (2017) (staged by Mstislav Pentkovsky) at the Mariinsky Theatre.

As an assistant director and choreographer, Ustyantsev worked on many productions at the Mariinsky Theatre: Carmen (new director’s version of the 2005 production), The Story of Kai and Gerda, Scenes from the Life of Nikolenka Irteniev, White Nights, The Idiot, The Little Prince (all staged by Alexei Stepanyuk) in 2016; Murych the Cat staged by Alexei Stepanyuk and Brundibár staged by Mstislav Pentkovsky in 2017.

At the Mariinsky Theatre he also took part in the preparation of concert programmes of the International Women’s Forum (2015) and the gala opening of the 6th St Petersburg International Cultural Forum (2017).

In 2018 Ustyantsev staged the ballet Tango Without You to Astor Piazzolla’s music at the Mariinsky Theatre branch in Vladikavkaz.

Director and choreographer of the rock show Wings of Gryphon (2018) of the Concord Orchestra at St Petersburg’s Ice Palace.

Ustyantsev has collaborated with theatres in St Petersburg, Krasnodar, Novosibirsk, Omsk and Almaty (Kazakhstan).
Information for May 2021