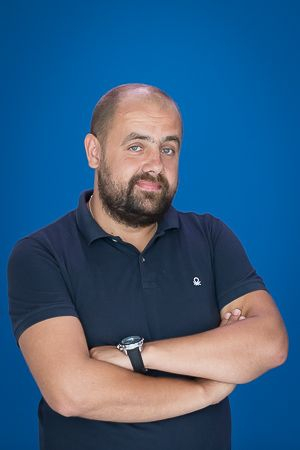 From 1999 to 2014 he applied his knowledge and expertise in numerous drama productions, variety shows, outstanding opera and ballet productions. He designed over sixty opera, ballet and drama productions in Russia and abroad.

As a scenic designer, he designed sets and scenery for The Good Lie at the Lenkom Theatre, God of Carnage at the Baltic House Theatre-Festival, The Queen of Spades. The Game at the Novosibirsk State Academic Opera and Ballet Theatre, Mozart. The Marriage of Figaro at the Mikhailovsky Theatre, Rigoletto and Sadko at the Glinka Chelyabinsk State Academic Opera and Ballet Theatre.

As a set and costume designer, Pyotr Okunev engaged in designing for Lucia di Lammermoor at the Kolobov Novaya Opera Theatre of Moscow, Carmen at the Astrakhan State Theatre of Opera and Ballet, Falstaff at the Novosibirsk State Academic Opera and Ballet Theatre. He was set designer of Don Pasquale (2018) directed by Hans-Joachim Frey at St Petersburg’s Music Hall Theatre.

Since 2014 Pyotr Okunev has been working as stage designer of the State Primorsky Opera and Ballet Theatre. In 2016 he was appointed as Chief Designer of the Primorsky Stage of the Mariinsky Theatre. He acted as an artistic director upon production of some operas such as Carmen (2014), The Tale of Tsar Saltan (2014), Tosca (2015), Tariverdiev’s Expectation (2016), Bastien und Bastienne (2016), Mavra (2018), The Tsar’s Bride (2018), War and Peace (2020), the ballet A Thousand and One Nights (2020), the musical drama L’Histoire du soldat by Stravinsky (2015) and the chamber performance to music by Tariverdiev Non-Random People (2016).

At the Mariinsky Theatre in St Petersburg he designed sets and scenery for Tannhäuser (2019); as a set and costume designer, he engaged in designing for Mozart and Salieri (2019), Kashchey the Immortal (2019), The Noblewoman Vera Sheloga (2019).