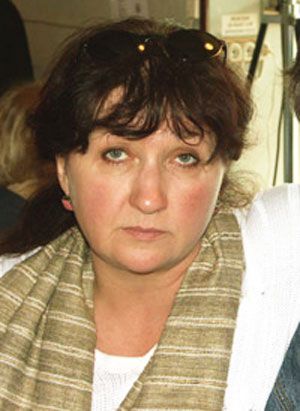 Olga Lukina graduated from the Faculty of Painting at the Novoaltaisk Art College in 1976 and from the Leningrad Institute of the Theatre, Music and Cinematography in 1983. Upon graduation she worked as a costume designer for the Vera Komissarzhevskaya Theatre. At the same time she took part in productions at Novosibirsk, Rybinsk, Barnaul and Vyborg theatres as a stage designer.
In 1989 she was invited to work as a costume designer to the Academic Bolshoi Drama Theatre. She worked in St Petersburg with such directors as Agamirzian, Vorobyev, Astrakhan, Chkheidze and with the stage designers Sumbatashvili, Kochergin, Gabay, Meskhishvili, Firer and others.
In 1994 she established her own studio for the production of costumes and painted textiles. She works in the field of painting and contributes to major art exhibitions in Russia.
Member of the Union of Russian Artists since 1997.