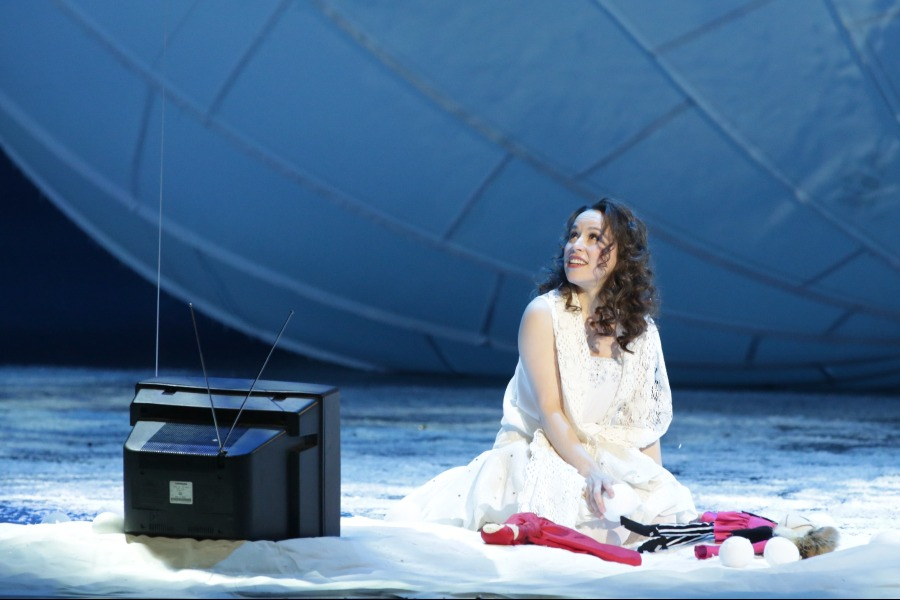 Act II
Berendei is alarmed: Yarilo the sun-god is incandescent with rage at the Berendeyans and refuses to warm their earth. To appease the sun, on Yarilo's day Berendei resolves to marry off the brides and grooms within his kingdom. And yet the tsar's confidante, the boyar Bermyata, relates that the maiden Snegurochka who has appeared in the settlement across the river has turned the heads of all the grooms – and that they have abandoned their brides. Kupava rushes in. She tells of her unhappiness. The  enraged Berendei orders his retainers to seek out the miscreant and bring him to the regal Court. The  heralds summon the people. Mizgir is brought in. He refuses to obey Berendei's order to marry Kupava. As punishment, the tsar condemns him to eternal exile. Mizgir makes no attempt to justify himself. He asks only that Berendei look at Snegurochka. The  girl's beauty stuns the tsar. Recognising the fact that this stranger knows nothing of love, he comprehends the reason behind Yarilo's wrath. Berendei then declares that among those youths, the one who can instil Snegurochka with love before dawn will have her as a bride. Mizgir requests that his exile may be deferred and promises to set flame to the love within the heart of this innocent beauty.

Act III
The  Berendeyans have assembled deep in the forest so that they can celebrate Yarilo's day with games and dancing. As an award for his song, the tsar offers Lel the choice of selecting the maiden closest to his heart. The  shepherd selects Kupava, which reduces Snegurochka to tears. On seeing her, Mizgir begs her to relieve him of his burning passion and to return his love for a priceless pearl, but his ardent speech only frightens the girl. The  Wood-Goblin stand's on Mizgir's path. He enchants the forest and tempts him with visions of his beloved.

Act IV
Yarilo's valley at dawn. Snegurochka turns to her mother with the reques that she grant her love. In response to the request of Spring's daughter, she is adorned with a magical garland. Now Snegurochka knows the sensation of love, and her next embrace with Mizgir is met with mutual passion. Soon the sun will rise, and, remembering her parents' instructions, the girl urges her beloved to flee form Yarlio's rays which will destroy her. As the first rays of the rising sun dawn, Berendei blesses the brides and grooms. Snegurochka and Mizgir bow before him. But their happiness is short-lived. The  bright rays of the sun dispel the morning mists and fall upon Mizgir's beloved. Even on sensing her approaching death, she thanks her mother for the blessed gift of love. Beside himself with grief, Mizgir plunges into a lake. Yet the wise Berendei is unperturbed: Snegurochka's death placates the wrath of Yarilo, and Grandfather Frost can no longer hold the Berendeyans captive to his icy coldness. Lel and all the people sing a hymn in praise of the sun.

Running time: 3 hours 05 minutes
The performance has one interval