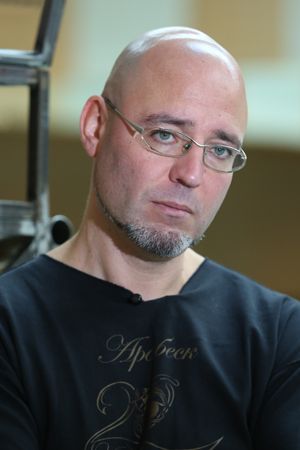 Born in Chișinău to a family of ballet dancers. In 1991 he graduated from the Perm School of Dance (class of Alexander Sakharov).

At theatres in Ukraine, Belarus, Latvia and Russia Radu Poklitaru has created numerous miniatures for dancers and ballets including Woman in D Minor to music by Bach (the Odessa Dankevich College of the Arts and Humanities, 2001), The World Doesn’t End at One’s House Door to music by Mahler and des Prez (Minsk State Musical Theatre, 1999), Lе Spectre de la rose to music by Weber (Minsk State Musical Theatre, 2001), Carmen to a musical fantasia based on motifs of the eponymous opera by Bizet (National Opera and Ballet Theatre of the Republic of Moldova, 2001), Carmen to music by Bizet – Shchedrin (the Odessa Dankevich College of the Arts and Humanities, 2002), In pivo veritas to Irish folk music and music of the Renaissance era (Minsk State Musical Theatre, 2002), Pictures at an Exhibition to music by Musorgsky and Le Sacre du printemps to music by Stravinsky (Ukrainian National Shevchenko Opera House, 2002), Prokofiev’s Romeo and Juliet with Declan Donnellan (Bolshoi Theatre, 2003), Boléro and La Valse to music by Ravel (National Opera and Ballet Theatre of the Republic of Moldova, 2003), Ward 6 to music by Arvo Pärt (Bolshoi Theatre as part of an Evening of Young Choreographers, 2004), Othello’s Birthday to music by Prokofiev (the “Moscow” Russian Chamber Ballet Company, 2004), The Seven Deadly Sins to music by Kurt Weill (Perm State Tchaikovsky Opera and Ballet Theatre, 2004), Prokofiev’s Cinderella and Khodosko’s Cinderella (Latvian National Opera, 2005-2006), the mono-opera Princess Ateh, or Revelations of the Khazar Princess by Ghenadie Ciobanu together with stage director Petru Vutcărău (National Theatre of Opera and Ballet of the Republic of Moldova, 2005), the opera-ballet Le forze del destino to an anthology of music with stage director Petru Vutcărău (Vladimir Filippov Arts Foundation, Kiev, 2005, 2005) and Hamlet to music by Dmitry Shostakovich (Bolshoi Theatre, 2015).

In 2012–2013 he was Artistic Director of the Kiev Municipal Academic Opera and Ballet Theatre for Children and Young People. In 2014 he choreographed the opening and closing ceremonies of the Olympic Games in Sochi.

At the Mariinsky Theatre he has staged the ballet Symphony in Three Movements (2015) to music by Stravinsky and has also worked on the choreography for the opera The Snow Maiden (2020, director Anna Matison).
Information for September 2020