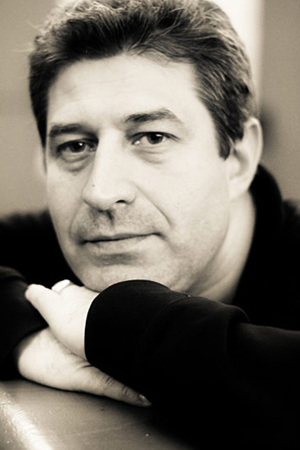 Has worked as a lighting designer at theatres in St Petersburg since 1991. Regularly collaborates with the Baltiyskiy Dom Theatre.

Has designed the lighting for productions of An Optimistic Tragedy. A Farewell Ball after motifs of the play by Vsevolod Vishnevsky at the Alexandrinsky Theatre, The Meek One by Fyodor Dostoevsky at the Tovstonogov Bolshoi Drama Theatre, Electra by Euripides and Ivanov by Anton Chekhov at the Theatre of Nations, What a Pity People Can't Fly... after Alexander Ostrovsky, Playing the Victim by Vladimir and Oleg Presnyakov, A Dream of the Autumn by Jon Fosse at the Lensoviet Theatre, Between Dog and Wolf by Sasha Sokolov at the Formal Theatre, Anna Karenina by Leo Tolstoy at the Baltiyskiy Dom Theatre, Without Words and An Account of the History of the Town of Glupov after Mikhail Saltykov-Shchedrin, Memorial Prayer by Grigory Grigorin, Hedda Gabler by Henrik Ibsen, L'uomo, la bestia e la virtù by Luigi Pirandello, Fathers and Sons by Brian Friel, Onegin after Alexander Pushkin, The Taming of the Shrew by William Shakespeare, Bond-Maids by Alexander Ostrovsky, Dovlatov. Anecdotes and The Decameron by Giovanni Boccaccio at the Red Torch Theatre (Novosibirsk) among other works.

Has also worked on productions of operas and ballets including Donizetti's Don Pasquale at the Bolshoi Theatre of Russia, Rusalka by Dvořák at the Mikhailovsky Theatre, Balanchine's Jewels at the Novosibirsk Opera and Ballet Theatre, Verdi's Il trovatore at the Opera and Ballet Theatre of the Republic of Sakha (Yakutia) and Verdi's Rigoletto at the Opernhaus Wuppertal.

At the Mariinsky Theatre he has designed for a production of Rimsky-Korsakov's opera The Snow Maiden (2020).

On numerous occasions he has been nominated for the Golden Mask award; recipient of the award in 2014 for his work on a production of Onegin at the Red Torch Theatre in Novosibirsk.