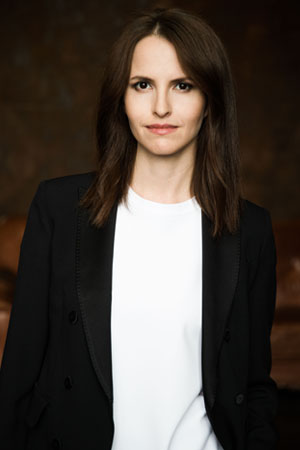 Born in Irkutsk in 1983. Graduated from the international faculty of the Irkutsk State University and from the faculty of screenwriting of the All-Russian State Institute of Cinematography (2013, workshop of Natalia Ryazantseva).

Has worked in TV journalism. In 2004 together with director and producer Yuri Dorokhin she founded the REC.production independent studio which produces video films and audio and video advertising.

Anna Matison’s collaboration with Yevgeny Grishkovets began with the short film The Mood Improved (2008). Has filmed a series of documentaries and feature films, among them Satisfaction, The Musician (about pianist Denis Matsuev), The Mariinsky Theatre and Valery Gergiev and Prokofiev: During the Journey. Has appeared as a screenwriter of the New Year comedies Yolki 2, Yolki 3 and Yolki 1914.

As a director and editor for the Mariinsky label she has worked on recordings of operas including The Lefthander, Semyon Kotko, The Golden Cockerel and The Tale of Tsar Saltan.

At the Mariinsky Theatre she staged such operas as The Golden Cockerel by Rimsky-Korsakov (2014), Pelléas et Mélisande by Claude Debussy (2019), worked as a designer on the ballet Symphony in Three Movements (2015) and as a librettist and designer she has worked on the children’s ballets Bambi and In the Jungle (2015).
Information for March 2020