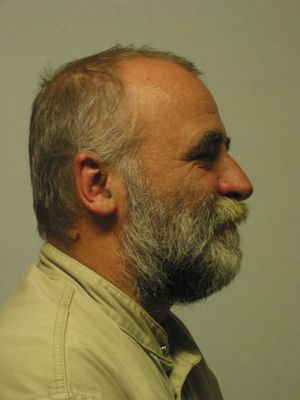 Alexander Orlov in 1974 graduated from the Leningrad State Institute of Theatre, Music and Cinematography (course taught by Edward Kochergin). From 1976 to 1980 he worked as a production designer at the Young Spectators’ Theatre in Riga. Between 1981 and 1986 and subsequently between 1990 and 1993 he was Principal Designer of the Youth Theatre on the Fontanka. In 2005 he launched a course at the Russian State Institute of Stage Arts (formerly the St Petersburg Academy of Theatre Arts).

Since 1980 he has been a member of the Union of Artists. Has taken part in seasonal exhibitions of the Leningrad Organisation of the Union of Artists of Russia, the Results of the Season exhibition at the Union of Theatre Workers of Russia, All-Union and Republican exhibitions of the Union of Artists in Moscow and Kazan, the Baltic nations’ triennial exhibitions in Tallinn and Vilnius, the Prague Quadrennial in 1983 and a set design exhibition in Nový Sad. Diploma-recipient at the Prague Quadrennial (1983), recipient of St Petersburg’s most prestigious theatre prize the Golden Sofit (1998, 2001, 2002, 2004) and recipient of the State Prize of Russia (2000). Honoured Artist of Russia since 2005 and corresponding member of the Russian Academy of Arts since 2006.
At the Mariinsky Theatre Alexander Orlov worked on designs for The Enchanted Wanderer (2009), The Lefthander (2013), Eugene Onegin (2014), The Queen of Spades (2015), A Christmas Tale (2015), Not Love Alone (2017), The Tsar’s Bride (2018), The Snow Maiden (2020).