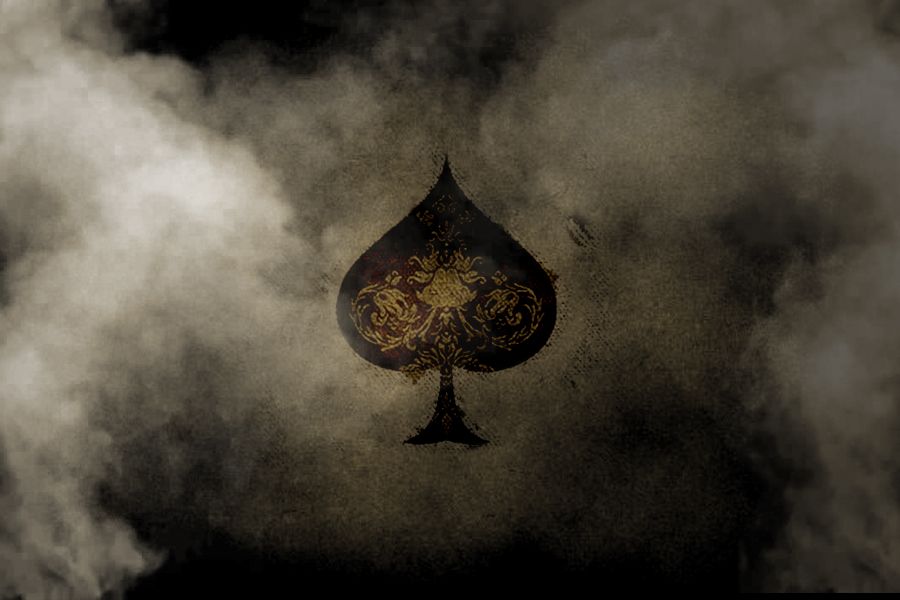 The Queen of Spades

Music by Pyotr Tchaikovsky
Libretto by Modest Tchaikovsky, after the novel by Alexander Pushkin

Act I
Scene One
The Summer Garden in springtime. Two officers, Chekalinsky and Surin, are concerned about the fortunes of their friend Herman, who visits gambling halls every evening, despite the fact that he does not play because he is so poor. Herman turns up, accompanied by Count Tomsky, to whom he explains the reason for his strange behaviour: he is in love with a girl to whom he has not yet been introduced, and wants to win a large sum of money in order to marry her (“I do not know her name”). Chekalinsky and Surin congratulate the Prince Yeletsky on his forthcoming marriage. An old Countess is walking in the garden with the very girl whom Herman loves. Upon finding out that she is the Prince´s fiancée, he is deeply shaken. The women are frightened by his appearance (“I´m frightened”). Tomsky tells the story of the old Countess´ past in Paris. Count Saint-Germain showed her three winning cards. The officers laugh at Herman, and advise him to tempt fate while Herman vows to fight for his love.
Scene Two
Liza´s room. She is singing with her friend Polina (“Oh, what an evening”). Left alone, Liza reveals her feelings: the Prince loves her, but she cannot forget the passionate gaze of the stranger in the garden (“Where are these tears from?” “Oh, listen, oh, night”). As if he had heard her calling, Herman appears on the balcony. He threatens to kill himself because Liza is promised to another, and tells her that no-one loves her as passionately as he does (“Forgive me, heavenly creature”). The Countess enters, and Liza hides the love-struck Herman. Like a man possessed, Herman starts to search for the three cards. Having been with Liza, he realises he is happy only when he is with her.

Act II
Scene Three
A masquerade at the home of a high official. Yeletsky assures Liza of his love (“I love thee”). Herman continues to be haunted by thoughts of the three cards. A musical intermezzo-pastorale begins (“My dear little friend”). After it ends, Liza gives Herman a key to a secret door by which he can enter her room.
Scene Four
The Countess´ bedroom. It is night. Above the fireplace there is a portrait of the Countess in her youth dressed up as the Queen of Spades. Herman carefully enters the room. He vows to wrest the secret out of the old woman, even if Hell awaits him. Footsteps are heard, and Herman hides. Servants enter, and then the Countess, who starts getting ready for bed. Having sent the servants away, the Countess falls asleep in her chair. Suddenly, Herman appears before her (“Don´t be frightened! For God´s sake, don´t be frightened!”). On his knees, he begs her to name the three cards. The Countess, having risen from her chair, is silent. Then Herman points his pistol at her. The old woman falls. Herman sees that she is dead.

Act III
Scene Five
Herman´s room at the barracks. Liza has written to him to say that she is ready to forgive him, but Herman´s thoughts are elsewhere. He remembers the Countess´ funeral (“All the same thoughts, the same nightmare”). The ghost of the Countess appears before him. Out of love for Liza, she names the three magic cards for him: a Three, a Seven and an Ace.
Scene Six
On the banks of the Winter Canal, Liza waits for Herman (“Ah! I´m worn out, I´m tired”). From his words she understands that he is responsible for the Countess´ death, and that he has gone out of his mind. She wants to take him away with her, but he pushes her aside and runs away (the duet “Oh, yes, the sufferings are over”). Liza throws herself into the river.
Scene Seven
A gambling hall. Tomsky is surprised to find Yeletsky, who is looking for Herman in order to exact revenge from him. The newly arrived Herman enters the game. Herman celebrates his victory (“What is our life, but a game!”). His winning streak strikes fear into everyone´s hearts. Yeletsky enters the game. Herman bets all of his winnings on the third card, but instead of an Ace, his hand comes up with the Queen of Spades. A shocked Herman sees the ghost of the Countess. She waits for his death. Herman dies, his last thought of Liza.

Alexei Stepanyuk, Production Director:
“The article by Boris Asafiev about The Queen of Spades begins, in my opinion, with that which is most important: “There is a strange Russian city. There one can only dream of light... When spring comes, it may appear, it delights no-one more than the populace of this imperious city. Shy, meek and tender, as it emerges it senses its brief existence... The White Nights that follow spring are also infused with grief. This strange and refracted light tires one, draws one, allures one, and when the sun rises people are in no state to rejoice and be glad in it – they are already exhausted by the process itself of being attracted to light...”
The Queen of Spades is not about cards or gambling. You can’t stage this opera by rejecting Pushkin’s magnificent story. In its plot – wonderful and even detective-like – there is nothing in common with the monumental tragic quality of Tchaikovsky’s music. Pyotr Tchaikovsky wrote of himself – of his fate, of his destiny, of his desire to be like others and his right to be different... About fear and passion, rooted in one and the same. All three characters – Hermann, the Countess and Liza – are infected by the same virus, they are drawn by what is fearsome...
This opera is about attitudes to death, about how death can be a release, how it can be beautiful, noble and redemptive... Perhaps the Countess was waiting for Hermann! In the fourth scene she becomes younger before our very eyes... As with Akhmatova, “This beauty is very young, but not from our century, we are not to be together, that one – the third – will never leave us.” That is death itself.
The plot of Tchaikovsky’s The Queen of Spades is filled with St Petersburg mythology which is hard to embody on the stage. I am delighted to be working with Alexander Orlov and Irina Cherednikova, designers with tremendous intuition. They are creating metaphorical and beautiful sets and luxuriant costumes. The architectural leitmotif of St Petersburg comes with the columns, there are a great many, they depict various configurations, there are black on top of gold... They act as shading, light-absorbing tulle curtains and when the action unfolds behind them everything takes on a spectral character, just like during the white nights...”