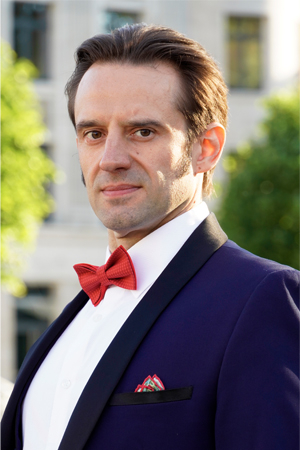 Relaxed, with soft and plastique movements, cynically good-humoured, yet not at all simple. This is a flamboyant Tomsky as interpreted by Viktor Korotich. His vocal expression and distinct volumetric pronunciation are excellent.
OperaNews.Ru

• Honoured Artist of the Republic of North Ossetia–Alania (2010)
• Recipient of the St Petersburg City Government Prize for Culture and Arts (2020; for the role of Iago in the opera Otello at the Zazerkalye theatre)
• Recipient of the Onegin National Opera Award and St Petersburg’s most prestigious theatre prize, the Golden Sofit (2018; for the role of Grigory Gryaznoi in the opera The Tsar’s Bride at the Zazerkalye theatre)
• Prize-winner at the 24th International Singing Competition of Clermont-Ferrand (2015)
• Diploma-recipient at the 8th Elena Obraztsova International Competition of Young Opera Singers (St Petersburg, 2011)

Viktor Korotich was born in Nizhnevartovsk. In 2005 he graduated from the Prokofiev Donetsk State Music Academy (class of Professor Gennady Kalikin). Began his career at the Solovyanenko Donetsk Opera and Ballet Theatre.
In 2007 he entered the Mariinsky Academy of Young Opera Singers. Made his Mariinsky Theatre debut in October 2007 in a performance of Die Zauberflöte.

He was the first performer of the role of Chertokutsky in the comical one-act The Carriage by Vyacheslav Kruglik, staged at the Music Festival honouring two centuries since the birth of Nikolai Gogol, and the roles of Alexander I and Nicholas I at the world premiere of Rodion Shchedrin’s opera The Lefthander at the Mariinsky Theatre (2013).

In 2011 he was a semi-finalist at the World Opera Competition Operalia in Moscow. Was rewarded with an honorary diploma of the Theatre Mask of Ossetia prize for his performance of the role of Escamillo in the opera Carmen (2010).

Has toured with the Mariinsky Theatre to Great Britain, Italy, Spain, Germany and Switzerland. He is a regular participant in the Moscow Easter Festival and the Stars of the White Nights festival.