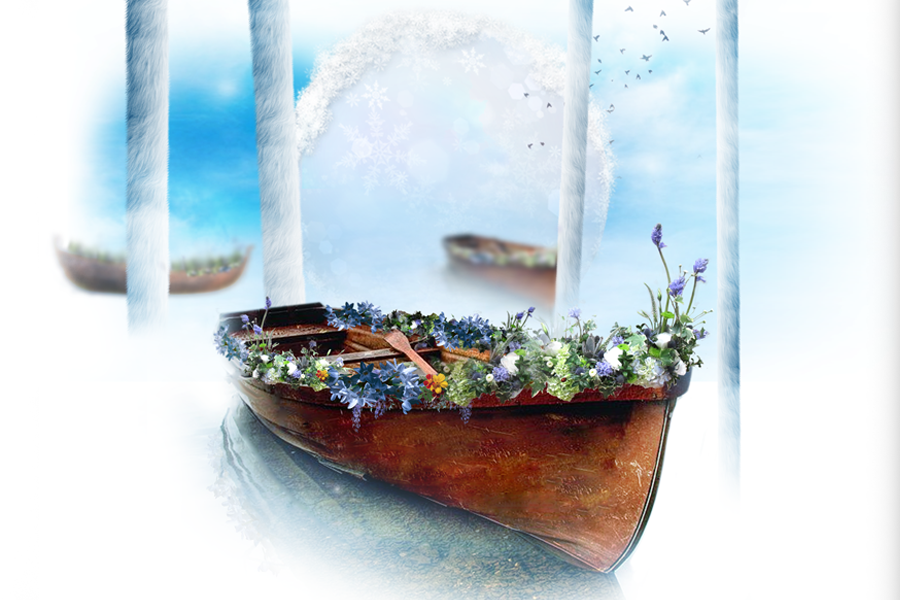 Act II
At the royal palace, blind gusli players sing praises to their sage ruler – the guardian of peace. Berendei is alarmed: Yarilo the sun-god is incandescent with rage at the Berendeyans and refuses to warm their earth. To appease the sun, on Yarilo's day Berendei resolves to marry off the brides and grooms within his kingdom. And yet the tsar's confidante, the boyar Bermyata, relates that the maiden Snegurochka who has appeared in the settlement across the river has turned the heads of all the grooms – and that they have abandoned their brides. Kupava rushes in. She tells of her unhappiness. The  enraged Berendei orders his retainers to seek out the miscreant and bring him to the regal Court. The  heralds summon the people. Mizgir is brought in. He refuses to obey Berendei's order to marry Kupava. As punishment, the tsar condemns him to eternal exile. Mizgir makes no attempt to justify himself. He asks only that Berendei look at Snegurochka. The  girl's beauty stuns the tsar. Recognising the fact that this stranger knows nothing of love, he comprehends the reason behind Yarilo's wrath. Berendei then declares that among those youths, the one who can instil Snegurochka with love before dawn will have her as a bride. Mizgir requests that his exile may be deferred and promises to set flame to the love within the heart of this innocent beauty.

Act III
The  Berendeyans have assembled deep in the forest so that they can celebrate Yarilo's day with games and dancing. As an award for his song, the tsar offers Lel the choice of selecting the maiden closest to his heart. The  shepherd selects Kupava, which reduces Snegurochka to tears. On seeing her, Mizgir begs her to relieve him of his burning passion and to return his love for a priceless pearl, but his ardent speech only frightens the girl. The  Wood-Goblin stand's on Mizgir's path. He enchants the forest and tempts him with visions of his beloved. Kupava and Lel appear in a forest glade. In hiding, Snegurochka observes their declarations of love. In despair, she turns to her mother with the request that she grant her love.

Act IV
Yarilo's valley at dawn. In response to the request of Spring's daughter, she is adorned with a magical garland. Now Snegurochka knows the sensation of love, and her next embrace with Mizgir is met with mutual passion. Soon the sun will rise, and, remembering her parents' instructions, the girl urges her beloved to flee form Yarlio's rays which will destroy her. As the first rays of the rising sun dawn, Berendei blesses the brides and grooms. Snegurochka and Mizgir bow before him. But their happiness is short-lived. The  bright rays of the sun dispel the morning mists and fall upon Mizgir's beloved. Even on sensing her approaching death, she thanks her mother for the blessed gift of love. Beside himself with grief, Mizgir plunges into a lake. Yet the wise Berendei is unperturbed: Snegurochka's death placates the wrath of Yarilo, and Grandfather Frost can no longer hold the Berendeyans captive to his icy coldness. Lel and all the people sing a hymn in praise of the sun.

“You listen, and you melt…” the Snow Maiden sings with her dying heart, recalling the enchanting songs of Lel, the village shepherd. Rimsky-Korsakov invokes similar feelings with his music: at times it takes one’s breath away. The acute suffering of beauty also served as the original impulse that resulted in the creation of one of the most beguiling Russian operas: “In the winter of 1879–80,” the composer recalled, “I once again read The Snow Maiden, and I clearly saw its staggering beauty.” This is a reference to the play by Nikolai Ostrovsky, his “springtime tale”; this secondary title was retained for the opera, too. Written as if in one breath, surrounded by warm fields and groves, to the singing of birds, Rimsky-Korsakov’s The Snow Maiden became transformed into a hymn to beauty, harmony, nature, life and love. “For me, there was no better subject in the world, there were no finer poetic images than the Snow Maiden, Lel or Spring, there was no better kingdom than that of the Berendeyans with their wonderful tsar, there was no better world-view and religion than worshipping Yarilo the Sun-God,” the composer recalled of the unforgettable summer of 1880, which he spent in his country estate near Luga, working on The Snow Maiden. Two years later came the premiere; the Mariinsky Theatre was to be the first stage from which the marvellous melodies of Lel’s songs were heard, the Snow Maiden’s crystalline and tender voice, the hot speeches of Mizgir the visiting merchant, the passionate declarations of Kupava, the famous “Mighty nature is full, full of wonders” coming from Tsar Berendey’s lips, and the choruses of his faithful subjects – full-sounding, crowded, filled with indomitable and almost magical energy.

And yet from the very start, in the utopian idyll of the land of the Berendeyans, Rimsky-Korsakov caught something disturbing, and it was not for nothing that following the first reading of the play this kingdom seemed “strange” to the composer. For the sake of preserving the existing world order, a cleansing sacrifice is made, and if archaic consciousness is ready, without hesitation, to recognise the need for this sacrifice, then we, people of a new age, are different: “No solemn ritual and no conviction that everything is done as it should be and goes on as usual will assure us of the justice of retribution,” wrote Boris Asafiev. “We feel sorry for the Snow Maiden,” the scholar sums up, describing the scene where the heroine melts. Anna Matison, who staged The Snow Maiden in 2020 at this opera’s home stage, took the following step of debunking the dubious goodness of the society presented in Rimsky-Korsakov’s opus. Her Snow Maiden is not a pantheistic myth about the violation and restoration of cosmic balance, but rather the story of a lonely teenage girl who finds herself in an odious adult world inhabited by greedy liars. The audience pities the female protagonist from the prologue to the finale. The Berendeyans, despite all the colourful splendour of their festive attire (by costume designer Irina Cherednikova), are not at all a peaceful rustic people, they are not cute Old Slavic “hobbits”, they are an aggressive crowd of consumers, ultimately cursed to being destroyed by their own god. The immense sizzling sphere of Yarilo, so powerfully contrasting with the weightless white ball that is the Snow Maiden (by set designer Alexander Orlov), in this context may be regarded as a menacing warning. Khristina Batyushina