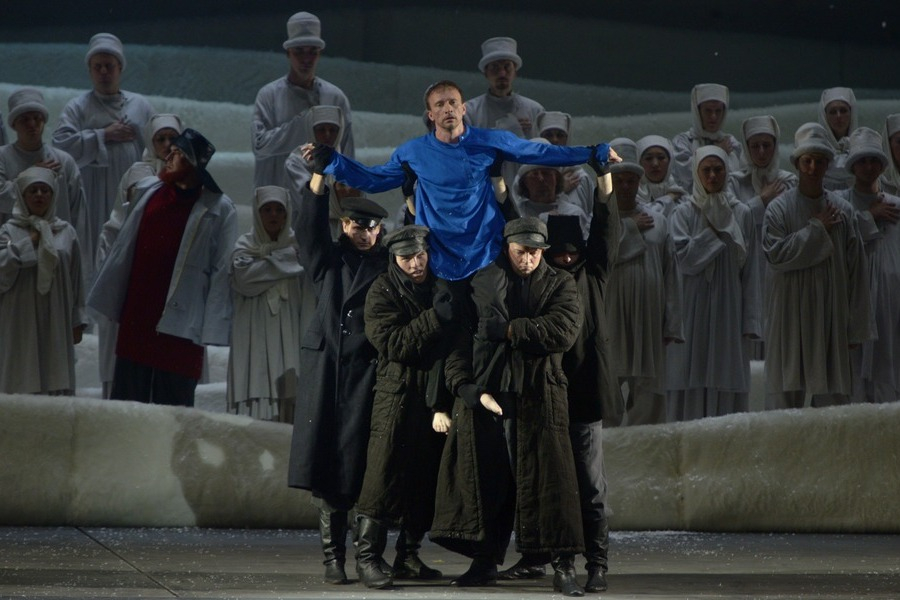 Music and libretto by Rodion Shchedrin

Act I
St. Petersburg. The Winter Palace.
Tsar Nicholas I views a curious thing: a small steel flea which has been presented to Alexander I by the British during his visit to Europe. The Minister Kiselvrode (Nesselrode) asks Platov, the Don Cossack, to tell the story of the flea because he accompanied Alexander on that trip. Platov starts his story: “When we emerged victorious over the French in the twelfth year, our Tsar wanted to travel and visit different countries ...We arrived in London... The British had thought up all kinds of cunning inventions to impress our Tsar...”

The London Armouries Museum. Princess Charlotte proudly shows Alexander I achievements of English armourers. The Tsar artfully praises foreign craftsmen. But Platov again notes that his fellows fought better than English ones. The Russian Tsar is shown a pistol, which the English admiral “grabbed away from the chieftain’s belt in Candelabria (Calabria).” Alexander is delighted, but Platov disassembles the pistol with a screwdriver and finds an inscription stating that the pistol was made by Ivan Moskvin the Lefthander from the city of Tula.”

The Tulitsa River (flowing). Under the song of Speaking women: “River Tulitsa, why so grey and sullen? We hear the trees rustling on your distant bank; there is treasure in that forest, yes, buried treasure…” The Lefthander is appearing.

Orchestral interlude No. 1: The Buckingham Palace.
Royal present. In the Buckingham Palace, the three Lords of the High Treasury and Princess Charlotte, with pomp and grandeur, present Alexander I a humble offering, ‘a speck of dust – a steal flea.’ “Nymphusoria” has a tiny key, and if you put it into the keyhole, the flea will dance.

Orchestral interlude No. 2: Seven turns of the key.
The Flea dances a Lancers’ Quadrille and sings the letters of the English alphabet. Alexander I: “Ah, oh, oh, how can they do that, such delicate workmanship? We Russians with all our knowledge cannot come near it…”

Again, Winter Palace (during the reign of Nicholas I).
Nicholas I, having listened to Platov’s story, decides that Russian masters are no worse than their English counterparts. He asks the ataman to go to Tula and show the Flea to his armourers, so they could “come up something even cleverer.”

A suburb of Tula.
The Lefthander and the Tula’s citizens are having fun: “Tula-gula, Tula-gula, the wind blew hard on Granny Glasha”. Ataman Platov arrives and shows the Flea and asks to “accomplish work that will shame the English nation!” The Lefthander offers to “leave this Flea in its royal snuffbox.” For several days the Lefthander stays in his workshop and works on the Flea.

Choral scene “The Russians refashion the English Flea.”
Ataman Platov returns to Tula and does not notice any visible changes in the Flea. In anger he takes the “fool” with him to Petersburg to make him be responsible to the Tsar.

The Winter Palace. Orchestral interlude No. 4: The microscope is brought in.
The Tsar had a look at the Flea in a microscope and discovered that the Lefthander “reconditioned” it so now the Flea dances “Barynya” and sings the Russian alphabet. The Tsar is full of pride and decides to return the Flea with “Russian modifications” to England. It must be taken by a special courier “who speaks all languages” and the Lefthander. The Tula master is dressed with latest fashion as he has “a special rank” and given a portion of wine.

Act II
The Buckingham Palace.
The Russified Flea performs its feat to the English’s amazement. Courtiers want the Lefthander to stay in England, but master says: “I have parents at home. We dearly love our Motherland. I’d be lonely here on my own. I’m still in the bachelor state.”
Then, the Englishmen try to find the Lefthander an English bride. But he is indifferent to their “Love Canzonets” and even does not like the clothes of English women at all.

Orchestral interlude No. 5: “Excursion of the Lefthander to the English armouries, works and factories.” During the excursions, the Lefthander is interested in how they clean their muskets.

A vision of Russia. Speaking women depicted as Holy Mother of God Intercessors sing about the Tulitsa River.

The Lefthander’s journey back to Russia. Despite the forthcoming storm the Lefthander takes his seat on a ship that soon will be embarking on the sea. The storm begins. The Lefthander wagers with an English Under-Skipper regarding who can outlast the other in a drinking competition.

Orchestral interlude No. 6: The storm. Above the noise of the waves, the Speaking women appear as guardian angels.

Return to St. Petersburg. In St. Petersburg, in a drunken state, the Lefthander and the Under-Skipper are hauled out of the ship. The Englishman, after frisk, is sent to the ambassador's house. Policemen ask the Lefthander for the papers and take him to “Obukhvinsky Hospital” where “all who are undocumented are taken to die.”

The next day the English Under-Skipper finds his Russian “comrade” in the hospital corridor. Three Infirmary Attendant-Undertakers indifferently say that “the cross-eyed old peasant will soon be gone.” The English Under-Skipper indignantly says that “he has a sheepskin coat, but he has the soul of a man!”
The dying Lefthander has only one request: to tell the Tsar that the English do not clean their muskets with brick dust, and the Russians should not do that too… “for if, God forbid, war should come, they will be no good for shooting…”

Lefty is the most famous story by Nikolai Leskov. In Russia everyone, but everyone knows it. Leskov’s tale is an incredibly rich literary source for an opera plot. The plot of the tale itself is a grotesque exaggeration. What is it?
Is it a Biblical parable, a farcical fairground myth or an epic tale?
The characters are vivid, luscious and contrasting. The Russian Tsars Alexander I and Nicholas I, the Winter Palace, the British Court. A buffonade and a tragedy. Laughter through tears... But if you look a little deeper then you can clearly see the artistic contradistinctions of two kinds of life – the rational British and the irrational Russian.
And, finally, there is the protagonist. The cross-eyed illiterate artisan with “golden hands” from Tula. He is a condensed representation, I believe, of the most important and the most typical features of the Russian national character – innate talent, wit, self irony, indifference to human life and a pernicious love of alcohol. And the eternal Russian theme of power and the common man. The lack of need for genius in one’s own country...
This full-length two-act opera was composed for the opening of the new stage of the Mariinsky Theatre in St Petersburg (Mariinsky-II). Valery Gergiev, who turned sixty this year, is the Musical Director and Conductor. My score is dedicated to him.
Rodion Shchedrin

Running time: 2 hours 45 minutes
The performance has one interval