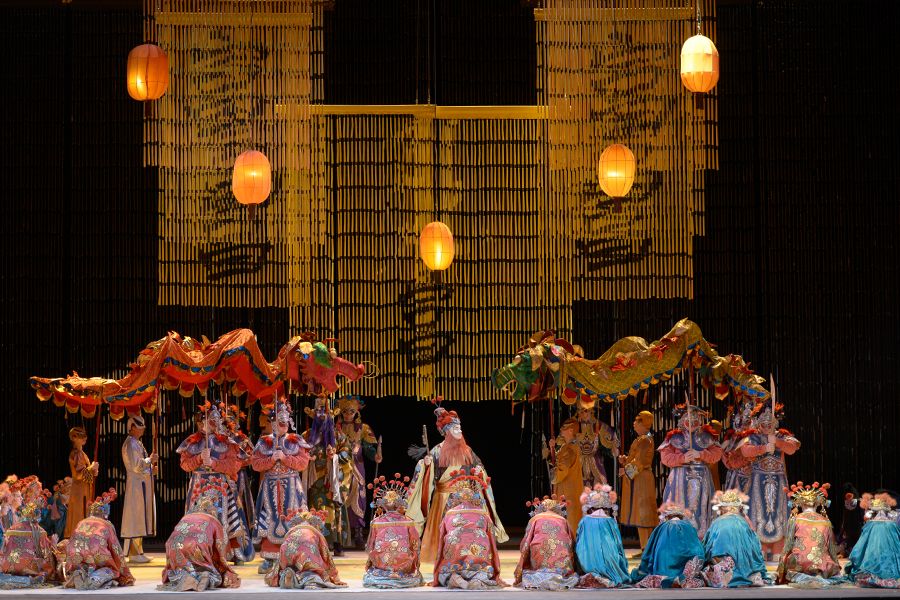 The action takes place in China in fairy-tale times.
Act I
The seashore just before dawn. In his boat, a fisherman is singing a song and listening to the trill of the Nightingale. The beautiful birdsong makes him forget his troubles. Courtiers approach the shore. They are burning with desire to hear the wondrous birdsong of which they have heard so much from the Cook. The Emperor himself, on learning of this beautiful bird hiding in his forest, has decreed it be found and brought to the palace. A cow moos and a frog croaks, and the courtiers take these to be the song of the Nightingale, but the Cook convinces them this is not so. The courtiers promise to make the Cook the Emperor’s personal chef if only they can find the bird. At last the Nightingale appears. He agrees readily to set off for the palace and sing for the Emperor.

Act II
The servants are decorating the palace with festive lanterns. The Cook tells everyone about the Nightingale: he is small and plain, but his song draws tears to the eyes. A grand procession arrives, servants bearing the Celestial Ruler under a canopy. The Nightingale sings and his beautiful trills enthral the Emperor. He wishes to award his singer with a golden slipper, but the Nightingale refuses: the best reward for him is to see tears of joy in the eyes of his listeners. Ambassadors arrive from Japan. They present the Emperor with their own nightingale – a mechanical one. It can repeat one and the same melody without ever getting tired. While all listen in delight to the mechanical bird, the living one flies away. Furious, the Emperor orders him to be banished from China, and the Japanese nightingale begins to sing “on the Emperor’s bedside table with his singer first on the left.”

Act III
It is night. The Emperor is seriously ill and Death appears in his chambers. It wears the Emperor’s crown on its head and in its hands holds his sabre and standard. The ghosts of deeds gone-by appear and insistently make themselves known. The Emperor wants to drown out their persistent voices and summons musicians, but suddenly the Nightingale flies in. Charmed by his singing, Death returns the crown, sabre and standard to the Emperor. It vanishes, and strength returns to the Emperor. The Celestial Ruler wishes to reward his saviour richly, but the Nightingale needs no repayment. He promises to come to the palace every night and sing for the Emperor. The courtiers, who have come to honour the memory of their late ruler, find him alive and well. In the distance, the fisherman can be heard singing.

Running time 45 minutes
The performance without an interval