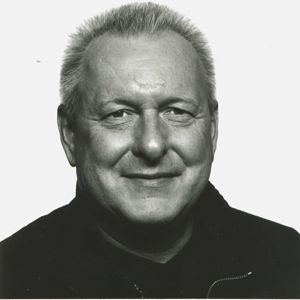 Graduated from the Leningrad Institute of Theatre, Music and Cinema (course taught by Ilya Segal). From 1979–1980 was set designer at the Young Viewers´ Theatre (Tomsk). From 1980–1983 was Principal Designer of the Vologda Drama Theatre. From 1983–1985 was designer with the Leningrad State Comedy Theatre (State Academic Akimov Comedy Theatre).
From 1986–1988 trained at the Grand Academic Tovstonogov Theatre with Eduard Kochergin.
From 1988–1991 was Principal Designer with the Youth Theatre on Fontanka.
From 1991–2002 was Principal Designer with the State Drama Theatre “On Liteiny”.
From 1999 has been a Professor and Head of the Faculty of Stage Design of the Academy of Theatre Art.
As a set designer he has worked on over one hundred productions for theatres in Tbilisi, Riga, Tallinn, Vilnius, Samara, Novosibirsk, Omsk, Saratov, Krasnoyarsk, Tula and Moscow.
In St Petersburg he has designed productions for the State Academic Akimov Comedy Theatre, the Grand Academic Tovstonogov Theatre, the State Academic Open (Lensoviet) Theatre, the Bryantsev Young Viewers’ Theatre, the Youth Theatre on Fontanka, the State Academic Komissarzhevskaya Theatre, the “Zazerkalye” St Petersburg Children’s Music Theatre, the Russian State Academic Pushkin (Alexandrinsky) Theatre, the “Baltic House” State Theatre and the State Buffo Theatre. Worked as a set designer at the Mariinsky Theatre on a production of the opera Mazepa (Stage Director: Irina Molostova), Le rossignol and The Tale of Tsar Saltan (Stage Director Alexander Petrov).
From 1979 has taken part in exhibitions of the Union of Artists and the Union of Theatre Workers and has held personal exhibitions in St Petersburg and Moscow as well as the USA. Chairman of the theater section of the Union of Artists.
Recipient of the Golden Sofit, St Petersburg’s highest theatre prize (1999), recipient of theatre prizes of the towns of Samara and Novosibirsk, nominated for the Golden Mask, Russia’s highest theatre prize (2002).