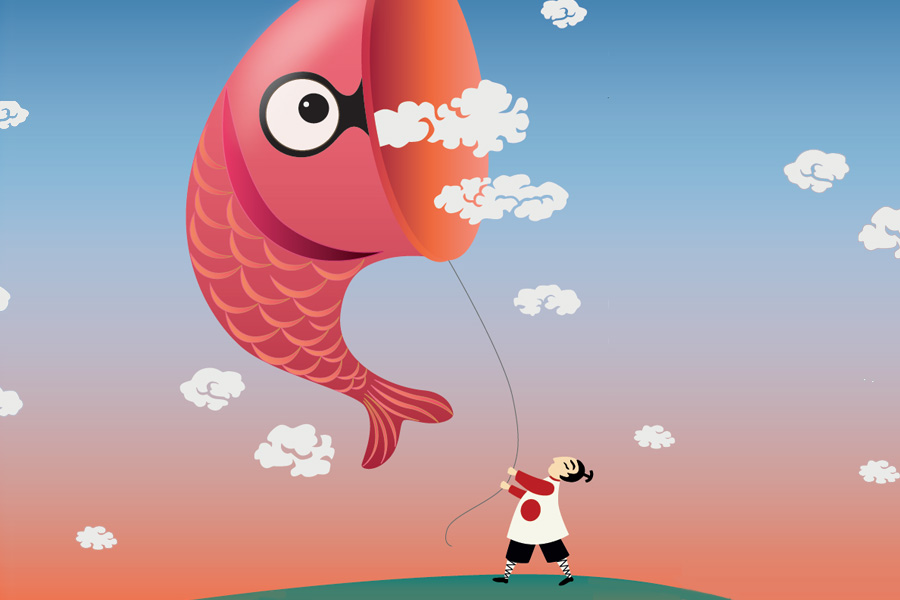 The Adventures of Kintaro

Part 1. Water. In the twilight before sunrise, Kintaro, a young man, is floating in his boat along the magic river of Sanzu. He is rowing energetically and humming a cheerful song to himself. His boat is surrounded by fish. Among them is the Mighty Carp, which is a symbol of courage in Japan. Kintaro starts singing the ballad of praise About the Courageous Carp. He lures the carp closer to the boat and throws a rope around it, trying to pull the gigantic fish out of the water. However, the carp does not yield and pulls the boat and the young man to the underwater wonderland instead.

Part 2. Air. Nopperapon, a faceless witch, lives in a hut on the banks of the Sanzu River. Once upon a time, she lured a young woman named Sadzaki to her hut, turned her into a small bird and locked her in a cage. Kintaro approaches the hut hoping to find some food and lodging for the night. Nopperapon is ready to help, but first she asks him whether he considers her beautiful. The witch appears before Kintaro in her horrendous true form. The young man sees her and flees in terror. He then turns up at the werecats’ place. They are preparing a bath. Kintaro tells the werecats his story and asks them to allow him to bathe and eat with them. The werecats eagerly agree and invite him in. However, the young man realises that if he is to stay with them for a long time, he can turn into a cat himself. Kintaro flees again and the werecats chase him until he reaches Nopperapon’s hut. Unlikely for the witch, she is out of the door the moment Kintaro appears and the werecats attack her. Nopperapon flees. Kintaro cautiously returns to the hut, finds the birdcage and decides to set the bird free. The evil spell is broken and Sadzaki returns to human form. Grateful to Kintaro for releasing her, she offers him her loving heart. However, Kintaro rejects her as adventures await him and he does not want to settle down. Sadzaki gives Kintaro a wooden comb as a farewell gift. If her ever changes his mind and wishes to see her again, he will need to take the comb to Mount Fuji.

Part 3. Earth. Before he sets out on his way, Kintaro wants to grab something to eat. He is only able to find a big pea, but the pea rolls down into the basement of the hut. Kintaro descends into the basement to retrieve it, but finds himself in an underground kingdom where he sees Jizo-Sama, a stone giant, who is also a patron of travellers. Jizo-Sama has already eaten the pea and tells Kintaro a secret instead: further down the path, behind the red curtains, devils are playing dice; if one plays the shepherd’s pipe, the devils will think that it is already morning and will disperse. The brave man can then take all their treasures, but he should not touch the magic hammer whatever the circumstances. Part 4. Fire. Kintaro takes the giant’s advice. However, upon hearing the devils sing about the hammer that grants wishes, the young man decides to take it regardless. As soon as the brave Kintaro takes the hammer into his hands, the dark forces of hell turn against him. Using the hammer, Kintaro summons the water dragon Suijin. The Magic Carp, who took Kintaro to the wonderland, has turned into the dragon. The dragon then raises a terrible storm and everything fades into darkness. Epilogue. Water. Dusk falls over the Sanzu River. Kintaro is napping in his boat. He believes that everything her saw was just a dream. However, he regrets rejecting Sadzaki and wants to take back what he said to her. The young man finds a wooden comb in his boat. Encouraged by his find, he heads for Mount Fuji, hoping to take Sadzaki’s gift to the temple and win back her love.