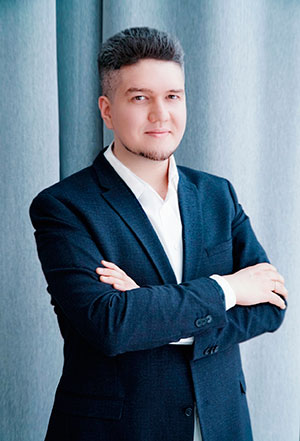 In 2011 he graduated with distinction from the Krasnodar Rimsky-Korsakov College of Music having specialised in “Vocal Art” (course of I. V. Shulzhevsky). Since 2011 he has been a soloist of the Mariinsky Academy of Young Opera Singers.

In 2017 he graduated with distinction from the St Petersburg State Rimsky-Korsakov Conservatory as a musical theatre stage director (course of Irkin Gabitov). Also studied at the Lenfilm studio’s Advanced School of Directors and Screenwriters. In 2017 he trained at the Deutsche Oper am Rhein (Düsseldorf, Germany), where as an assistant to stage director Guy Joosten he worked on Donizetti’s opera Maria Stuarda.

At the Mariinsky Theatre he has staged the children’s productions The Adventures of Kintaro (2018) and Loskutik and the Cloud (2020), and has also worked as a stage director on the concert series Film Music at the Mariinsky in the Shchedrin Hall (2018), the theatre divertissement The Soul of St Petersburg – the Mariinsky Theatre in the Stravinsky Foyer (2018) and the opening ceremonies of the Virtuosi of the Flute international festival at the Concert Hall (2018 and 2019).

His creative career has also featured productions at various venues in St Petersburg, among them operas such as Rimsky-Korsakov’s Mozart and Salieri, Shostakovich’s Anti-Formalist Rayok, von Weber’s Der Freischütz, Mozart’s Bastien und Bastienne, Voitenko’s Glossary 2.0 and Sagdiev’s Palace Guards and Hearing Voices, the programme Quartet 4х4 of Kultura TV, a charitable dinner of the Onegin National Opera Prize, a concert marking the anniversary of the Ryazan Oblast Philharmonic and other theatre concerts and music and drama productions.
Information for December 2020