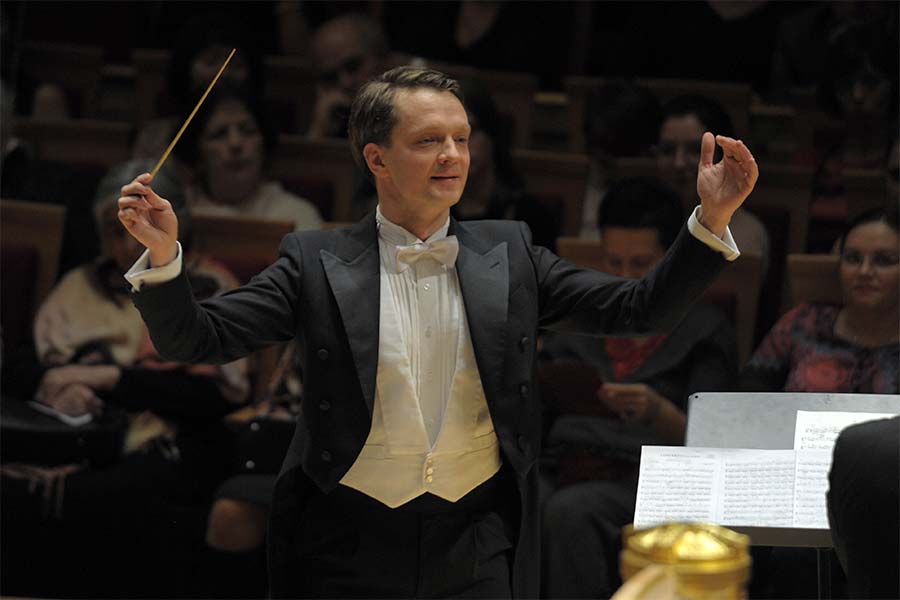 An evening of the oboe

Jean Sibelius
The Swan of Tuonela

Alfred Schnittke
Cadenza, Rondo and Postlude from Concerto Grosso No 1 (the composer’s own version for flute, oboe and strings)


Honoured Artist of Russia Vyacheslav Ivanovich Lupachov (1950 – 2015) was a man who did a great deal to promote the development of the Mariinsky Theatre. In the latter years of his life he directed the subdivision for innovative programming, prior to which for many years he was a soloist in the orchestra (first oboe).
Born in Novosibirsk, in 1976 Lupachov graduated from the&Moscow Conservatoire under Mamed Orudzhev and became a soloist with the Stanislavsky and Nemirovich-Danchenko Musical Theatre. At the same period he also taught at the two schools of music of the Moscow Conservatoire. An adherent of the illustrious Moscow wind instrument performing tradition, he quickly gained renown as a virtuoso oboist who was able to learn the most demanding music in a very short space of time. He had a dazzling technique and refined phrasing. He featured in the Moscow premieres of Alfred Schnittke’s Oboe, Harp and String Concerto (1974) and Edison Denisov’s Flute and Oboe Concerto (1979). Both composers were delighted with his performances.
From 1980 Lupachov worked at the Kirov (Mariinsky) Theatre. Colleagues have recalled him not just as a dependable partner in the orchestra and a sensitive and refined musician, but also as a performer who took an interest in everything that was new and who was prepared to share his knowledge and skills without question. In 1984 he formed a wind quintet of soloists together with which he performed many new works. Arrangements and original works for this ensemble and its members were produced by Edison Denisov, Andrei Petrov, Alexander Raskatov, Jarmo Sermilä, Sergei Slonimsky, Alexander Smelkov, Boris Tishchenko, Vladislav Uspensky, Alexander Tchaikovsky and Rodion Shchedrin among other composers.
With time, Vyacheslav Lupachov’s interests turned to theatre and concert management. His activities played a great role in the development of projects initiated by Valery Gergiev. Of great importance was Lupachov’s involvement in the construction of the Concert Hall of the Mariinsky Theatre and, later, the installation of the organ there. To a great degree it is thanks to his efforts that recording studios were built at the Mariinsky Theatre, media-broadcasting set up and internet-radio established with regular broadcasts from the Concert Hall.
Vyacheslav Lupachov was a man tirelessly dedicated to the theatre, deeply interested in the Russian and international success of the Mariinsky Opera, Ballet and Orchestra.

Wolfgang Amadeus Mozart composed his only oboe concerto for Giuseppe Ferlendis, a musician of the Salzburg Cappella. As irony would have it, Ferlendis, who was soon to depart from Salzburg, never ever performed the work; Mozart’s concerto occupied a very special place in the repertoire of another acclaimed oboist of the time, Friedrich Ramm. Subsequently Mozart reworked this music into a concerto for flute, and the sheet music for oboe was long considered lost; it was only in the 20th century that they were found and restored. The concerto, written by the twenty-one year-old Mozart, also reveals the gallant style. Constructed around the canons of the three-movement scheme typical of the genre, the concerto opens with an Allegro, where the virtuoso part of the oboe enters a competitive dialogue with the orchestra. The cantilena of the second movement cedes to a witty rondo finale in the spirit of Haydn, surpassing the score of the opera Die Entführung aus dem Serail.

The Swan of Tuonela is the second part of a cycle of four symphonic legends composed by Jean Sibelius after motifs of the Karelian-Finnish epos The Kalevala. At the heart of these legends lie the adventures of the resourceful Lemminkäinen. He set out for Tuonela – the kingdom of death surrounded by a river on which a black swan swims. Sibelius created a brilliantly mystical otherworldly scene, filled with melancholy northern colour. The orchestra is dominated by low-register instruments with a muffled “dark” timbre, and the strings throughout the entire work perform with mutes. The theme that symbolises the swan’s song is given to the solo English horn.

Following two attempts in his youth at the concerto genre – for violin and for French horn – Richard Strauss never returned to this genre for several decades, giving his preference to orchestral works and musical theatre. It was only in his later years that he created his second concerto for French horn (separated from the first by sixty years!) and his Oboe Concerto. American oboist John de Lancie, who at the end of the war served in the garrison near Garmisch-Partenkirchen where Strauss lived, requested that the composer write a concerto. Initially having rejected the request, Strauss nevertheless later began to work. The eighty-one-year-old composer, having survived a change of eras and traditions and seen the collapse of the old Germany, created music that sounded like a memory of the classical romantic age. This is indicated by his use of the classical three-movement structure (the movements follow without interruption), the tonality – the enlightened D Major – and the lightened, almost chamber-like format of the orchestra.

When working at the Court of Prince Leopold of Köthen, Johann Sebastian Bach composed almost entirely secular music, including a whole series of concerti for different solo instruments. Bach later reworked many of these into concerti for keyboard or several keyboards. It would appear that this is just what happened with the Oboe and Violin Concerto in D Minor. The original score has not survived, but it was restored in a version for two keyboards and orchestra created by Bach in the 1730s–40s. In his concerti Bach follows the traditions of Antonio Vivaldi, interpreting the latter’s experience in his own way. Just like the Italian maestro, Bach uses the three-movement cycle with fast outer movements and a slow middle one, as well as constructing the drama of the first movements in contrast with the sound of the full orchestra (ripieno) and the soloists (concertino).

Italian oboist Antonio Pasculli was named the “Paganini of the oboe” for his outstanding performing skills. Like many performers, Pasculli composed music for his own instrument – fantasias on themes from popular Italian operas. The Fantasia on Themes from Gaetano Donizetti’s Operа La favorita is a work that demands virtuoso control of the instrument from the performer. This is a cycle of gradually increasingly complex variations, preceded by a slow introduction.
Vladimir Khavrov

Alfred Schnittke dedicated his Concerto Grosso No 1 to his friends, the violinists Gidon Kremer and Tatiana Grindenko. The composer created the version for solo flute and oboe in 1988 for Vyacheslav Lupachov.
A concerto-like nature was always prevalent in Schnittke’s musical preferences. He was drawn by the dialogue that, within the framework of the competitive argument between the soloists and the orchestra (or orchestral sections between themselves) allowed one to see visually the conflicting drama of the music. Concerto Grosso No 1 is the composer’s startlingly vivid manifesto of polystylistics in the composer’s works. The genre itself, referring back to the baroque era, brought to life direct stylistic parallels with the music of Vivaldi, Corelli and Handel. Alongside the romanticisation of the past, the “diversions” of dissonances, the parody-mocking timbre of the prepared piano and fragments restrained in dodecaphonic (serial) technique, stand out in particular contrast.
Ultimately, the most expressive contrast of all is that of the triumph of the “low” music of the everyday in the “lofty” philharmonic genre. This also comes in the introductory theme of the Prelude, which is performed on prepared piano – it later returns in various movements of the cycle as a refrain theme throughout the work. It also appears as a shocking tango, which comes in the second Rondo episode. Apropos, the tango borrowed from Schnittke’s music for Elem Klimov’s film Agony remained on the shelves for years due to censorship.
The Concerto Grosso features many borrowings from Schnittke’s music for other art and documentary films, which underlines the composer’s insistent desire to blur borders, to break down international barriers in the consciousness of performers and audiences. “The language of music should be unified, as it has always been,” Schnittke said. The search for this universal language indeed brought the composer to the creation of a movement in contemporary music which, with his light hand, came to be known as polystylistics.
Iosif Raiskin