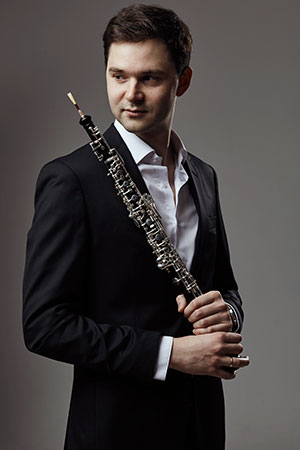 Alexei Fyodorov graduated from the St Petersburg State Rimsky-Korsakov Conservatoire (2011) and the Musikhochschule in Cologne (2013).
Prize-winner at All-Russian and international competitions and a grant-recipient of the Alfred Toepfer Stiftung (Germany).
Has taken part in master-classes given by Alexei Utkin, Alexei Ogrintchouk, Christian Wetzel, Ingo Goritzki and Hansjorg Schellenberger. In 2011–2013 he trained with the St Petersburg Philharmonic, Honoured Ensemble of Russia. In 2012 he took part in the project Junge Deutsche Philharmonie.
Since 2013 he has been a leader of the oboe section of the Mariinsky Orchestra.