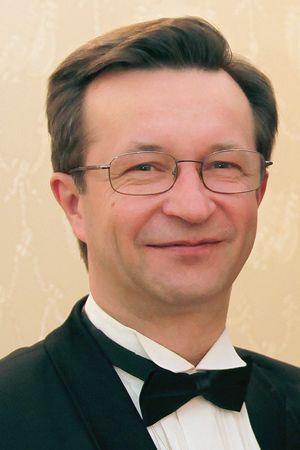 Born in Leningrad. In 1982 he graduated from the Leningrad Rimsky-Korsakov School of Music (class of Semyon Ilyasov), in 1988 he graduated from the Leningrad State Rimsky-Korsakov Conservatoire (class of Professor Kirill Nikonchuk) and in 1991 he completed an assistant traineeship (class of Professors Kirill Nikonchuk and Vladimir Kurlin). In 1987 he became a prize-winner at the All-Union Woodwind Musicians’ Competition. He began his professional career in 1984 as a soloist with the Leningrad Chamber Orchestra of Early and Contemporary Music (Artistic Director – Edward Serov, People’s Artist of the RSFSR, who was succeeded by Ravil Martynov, People’s Artist of Russia). From 1989 he was a soloist with the Academic Symphony Orchestra of the Leningrad Philharmonic under Alexander Dmitriev, People’s Artist of the USSR. From 1995–1997 he was a leader with the Academic Symphony Orchestra of the St Petersburg Philharmonic, Honoured Ensemble of Russia. Since 1997 he has been an oboe soloist with the Mariinsky Orchestra.
For many years he has had an intense recital schedule, performing more than one hundred concerts with the orchestra.
In 2008 he was awarded the honorary title of Honoured Artist of the Russian Federation.
He performs a Josef Okinawa flute and has been an official artist of the company since 2013.