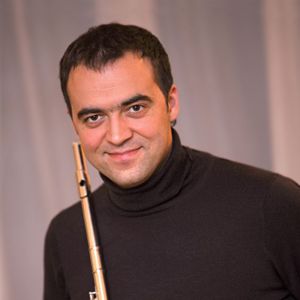 Denis Lupachev performed as soloist with the Vladikavkaz Symphony Orchestra, St Petersburg Camerata orchestra, Samara and Sverdlovsk Philharmonics, and with the Mariinsky Orchestra under the direction of Tugan Sokhiev and Gianandrea Noseda. Since 2010 he has collaborated with the Russian State Chamber Orchestra (Moscow) and Novosibirsk Chamber Orchestra.

His concert work in Russia and abroad is very active: he participated in festivals including Musical Olympus (2000) and Stars of the White Nights (2002) in St. Petersburg, Leonardo de Lorenzo festival (2000) and Musicare (2001) in Italy, Saimaa Music Festival (2002) in Finland, O/Modernt (2012 and 2013) in Sweden. During the Stars of the White Nights festival in 2002 he performed Alfred Schnittke’s Concerto grosso No. 1 along with Alexei Ogrintchouk, this edition (with solo flute and oboe) was arranged by the composer for the oboist Vyacheslav Lupachev, Denis’ father. In 2005 he also performed Boris Tishchenko’s Concerto for Flute, Piano and Strings during Russian Winter festival in Moscow, the piano part played by the composer. He also played in the Mariinsky Chamber Soloists ensemble with the other members of the Mariinsky Orchestra. This ensemble recorded two discs in 2002 and 2004.

Denis Lupachev gives master classes in Russia and abroad, and since 2007 has been member of the River of Talents project established by St Petersburg Music House to support young musicians. In 2004–2007 and since 2013 he has taught at the St. Petersburg Conservatory.

In addition to his orchestral work at the Mariinsky, Denis Lupachev plays solo and chamber programmes in the Concert Hall and chamber halls. Since 2016 at his initiative the international annual Flute Virtuosi festival has been held at the Mariinsky theatre.