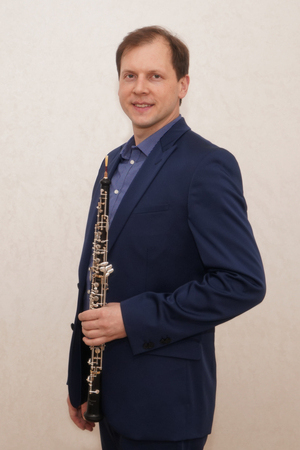 Alexander Levin was born in Moscow and graduated from the Gnessin Russian Academy of Music as well as completing an assistant trainee programme at the academy (class of Ivan Pushechnikov).
Prize-winner at the Classical Legacy Open International Soloists’ Competition in Moscow (1st prize, 2001). In 2013 he completed his postgraduate studies at the University of Augsburg (class of Heike Steinbrecher).
Has collaborated with the Neue Philharmonie in Munich, the Leopold Mozart Kammerorchester (Augsburg) and the Philharmonie Salzburg.
Takes part in the Moscow Autumn festival on an annual basis.
To great critical acclaim he has performed works for oboe by contemporary composers such as Valeri Kikta, Viktor Ulyanich, Olesya Evstratova, Georgy Salnikov, Ivan Pushechnikov, Sergei Berinsky, Nikolai Kolodochka and Rodion Shchedrin.
Performs recitals each year in Russia and Germany.
Soloist with the Mariinsky Orchestra since 2013.