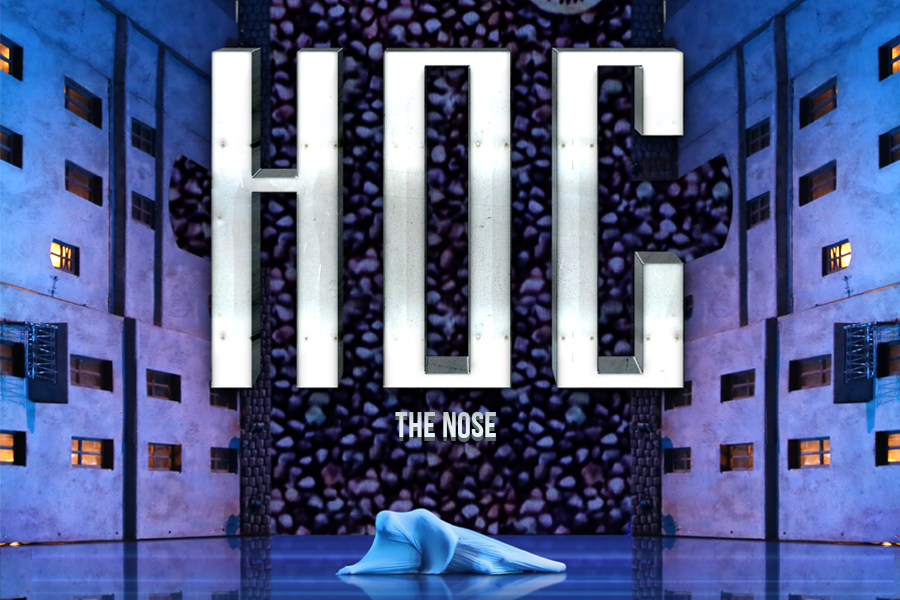 Music by Dmitry Shostakovich
Libretto by Yevgeny Zamyatin, Georgy Ionin, Alexander Preis and the composer after the short story by Nikolai Gogol

Act I
Scene 1. Either in a dream or in reality, the barber Ivan Yakovlevich is doing his hateful job in a drunken stupor.
Scene 2. Ivan Yakovlevich and his wife Praskovia are taken aback to find a nose in a bread roll.
Scene 3. The panic-stricken barber tries to dispose of the evidence.
Scene 4. When he wakes up in the morning, Major Kovalev discovers his nose has disappeared.
Scene 5. Inside Kazan Cathedral, Major Kovalev unexpectedly meets his nose and tries to speak to it.

Act III
Scene 8. A coaching-inn. The district constable is giving instructions to his men to capture the travelling Nose. A procession of travellers enters: a mother and father with their two sons, Ivan Ivanovich and Pyotr Fyodorovich, an elderly lady surrounded by hangers-on and a bread roll seller. Suddenly the nose appears. In the confusion, they manage to catch it.
Scene 9. Kovalev´s apartment. The district constable brings Kovalev his Nose and, on receiving his reward, disappears. In vain, the major tries to put the Nose back on his face. A doctor arrives but is unable to help Kovalev. Kovalev and his friend Yaryzhkin suspect the guilty party to be staff-officer Podtochina, acting in revenge for Kovalev´s contempt for her daughter. The friends write a letter to Podtochina, which Ivan the footman delivers. Ivan returns with an answer and Kovalev understands that the women are innocent.
Scene 10. A street. A rumour is spreading over the city that Kovalev´s Nose has run away. The horrific tale has captured the imagination of the whole city: Everyone, including the eminent merchant Khorzev-Mirza, is discussing the event in the most animated fashion. Unexpectedly Major Kovalev joins the mêlée: his nose is exactly where it should be.

Shostakovich's phantasmagorical opera has only been staged in Russia at Leningrad's Maly Opera Theatre in 1930 (the world premiere) and at the Boris Pokrovsky Chamber Music Theatre in Moscow in 1974. Unlike his predecessors, Yuri Alexandrov did not regard The Nose as a satire of the tsarist regime or the bourgeoisie – his production at the Mariinsky Theatre had the secondary title of Passions for Kovalev. Apropos, the true hero of the production was not Kovalev, but the Nose itself, which appeared before the audience in many guises all at once: a prop nose of real-life proportions, a rubber canvas in the form of a nose, a dancer sewn into an elastic white bag and, finally, the Tenor-Nose that arises from the grave in the form of Napoleon.
Alexandrov admitted that "This piece by Gogol, the great mystifier and at the same time a great Russian sufferer, is seriously complex. I have made it even more complex." Here we have a circus, ROSTA posters, a chief of police dressed in Gogol's overcoat the size of a three-storey building and Sirin and Alkonost, soaring over a biblical-like crowd in Kazan Cathedral. The director used the same method employed at the Mariinsky Theatre five years earlier with Semyon Kotko: witty grotesque and the creation of a hypertrophied and at times riotous libretto of the on-stage plot. Combined with the staccato-arrangement of Shostakovich's constantly twisting and sparkling score, the result is rather extravagant. The "pivot" of this colourful and kaleidoscopic spectacle came with Zinovy Margolin's sets – an upside-down St Petersburg courtyard. At key moments in the opera a video backdrop is revealed and the plot unfolds in a stunning metallic tunnel – "a combination of Tatlin's Tower pushed on its side with urban catacombs inhabited by American thrillers."
Bogdan Korolyok

Running time: 2 hours 25 minutes
The performance has one interval