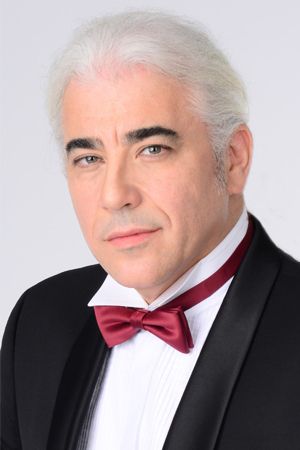 In 1991 he graduated from the St Petersburg State Rimsky-Korsakov Conservatoire (class of lecturer Sergei Ryazantsev). Continued his vocal studies under Ye. Manukhova (Gromova), F. Pagliazzi and F. Barbieri (master-class in 2000). From 1991–1995 he was a soloist with the Opera and Ballet Theatre of the St Petersburg Conservatoire where he appeared in the roles of Eugene Onegin (Eugene Onegin), Figaro (Il barbiere di Siviglia) and Aeneas (Dido and Aeneas). At the Mariinsky Theatre he made his debut in 1994 as Dandini (La Cenerentola). That same year he appeared in the premiere of a new production of the opera Le nozze di Figaro (Count Almaviva).

Took part in the first Russian performance of Nikolai Karetnikov’s opera The Mystery of the Apostle Paul (conducted by Valery Gergiev at the Great Hall of the St Petersburg Philharmonic).
In 1995 he was invited to the Bolshoi Theatre in Moscow to appear as Count Almaviva in the premiere of a new production of Mozart’s opera Le nozze di Figaro. This performance was broadcast on ORT.
He was also involved in Russo-Dutch co-productions of the operas Le nozze di Figaro and Les Pêcheurs de perles at the Kazan Opera. Le nozze di Figaro was broadcast live by Kultura TV (2003).
The singer enjoys a longstanding partnership with the St Petersburg Theatre of Musical Comedy, where he has performed the roles of Edwin (Die Csárdásfürstin), Mr X (Die Zirkusprinzessin), Count Danilo (Die Lustige Witwe), Radjami (Die Bajadere), Tassilo (Gräfin Mariza) and Billy Flynn (Chicago) among others.
Together with the Zazerkalye St Petersburg State Children’s Music Theatre he was awarded Russia’s national Golden Mask theatre prize for the opera La Cenerentola (in the category “Best Opera Production”), in which he performed the role of Dandini.
Russia’s Kultura TV has invited the singer to perform recitals on the programme An Evening of Romance where he is a frequent and well-loved guest.

Has appeared on tour with the Mariinsky Theatre and independently to renowned theatres and concert venues throughout the world, among them La Scala (Milan), the Metropolitan Opera (New York), Covent Garden (London), the Opéra Bastille (Paris), the Teatro Real (Madrid), the Bolshoi Theatre (Moscow), the Royal Opera (Stockholm), the Grand Théâtre de Provence (Aix-en-Provence), the Opéra de Lyon, the Théâtre La Monnaie (Brussels), the Bunka Kaikan (Tokyo), the Sofia National Opera, the Fox Theatre (Atlanta), the Majestic (Boston), University Hall (Chicago), the Carré Royal Theatre (Amsterdam), the Rotterdam Opera (The Netherlands), Scottish Opera (UK), the Opera di Cagliari (Sardinia, Italy), The Great and Small Halls of the St Petersburg Philharmonic, the St Petersburg Academic Capella, the House of Music (Moscow), the Tchaikovsky Concert Hall (Moscow) and the Great Hall of the Moscow Conservatoire.
Frequently performs in recital. The singer has performed on tour in over thirty countries, taking him to hundreds of destinations from Murmansk and Stockholm in the northern hemisphere to Pretoria and Dubai in the south, and from Tokyo in the east to Los Angeles and New York in the west.
His extensive chamber repertoire includes over one hundred and fifty arias (from the Russian and European opera repertoire, operettas and musicals), over two hundred classical and early Russian romances, lyrical popular songs and Soviet and international popular classics. Vladimir Samsonov is one of the finest interpreters of the Russian romance and Soviet lyrical and war songs.
He is the recipient of numerous Russian and international awards and medals. In 2008 he was awarded the Leonardo da Vinci Medal by the European Academy of Natural Sciences for his achievements and merits in culture.