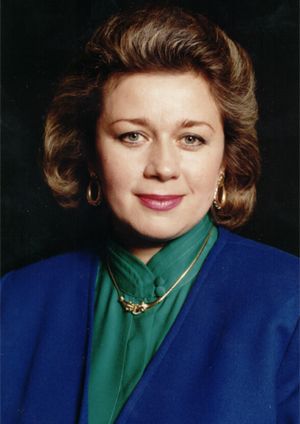 • People´s Artist of the USSR
• Recipient of the State Prize of the USSR
• Prize-winner at the All-Russian Glinka Vocalists´ Competition (1975)
• Recipient of many awards at international competitions including The Grand Prix and special audience prize (the Netherlands, 1977) and The gold medal and audience prize at the bel canto competition in Oostende (1978)
• Awarded the Golden Sofit, St Petersburg´s highest theatre prize, in the category Best Opera Role for her interpretation of Turandot in Puccini´s opera of the same name (2003)
• Order of Honour (2008)

Born in Lvov (Ukraine). After graduating from The Leningrad State Rimsky-Korsakov Conservatoire in 1976, she made her Mariinsky Theatre debut as Tatiana in Tchaikovsky´s Eugene Onegin. Mariinsky Theatre soloist from the same year.

From 1992 to 1997 she was a soloist with the Bonn Opera where she performed roles including Liza (The Queen of Spades) and Jenůfa (Jenůfa) in productions by Yuri Lyubimov. Has toured with the Mariinsky Opera Company to Italy, the Netherlands, Austria, Spain and the USA. The singer also frequently performs in concert independently, appearing in Birmingham, Edinburgh, Manchester and Melbourne as well as towns and cities throughout Germany.