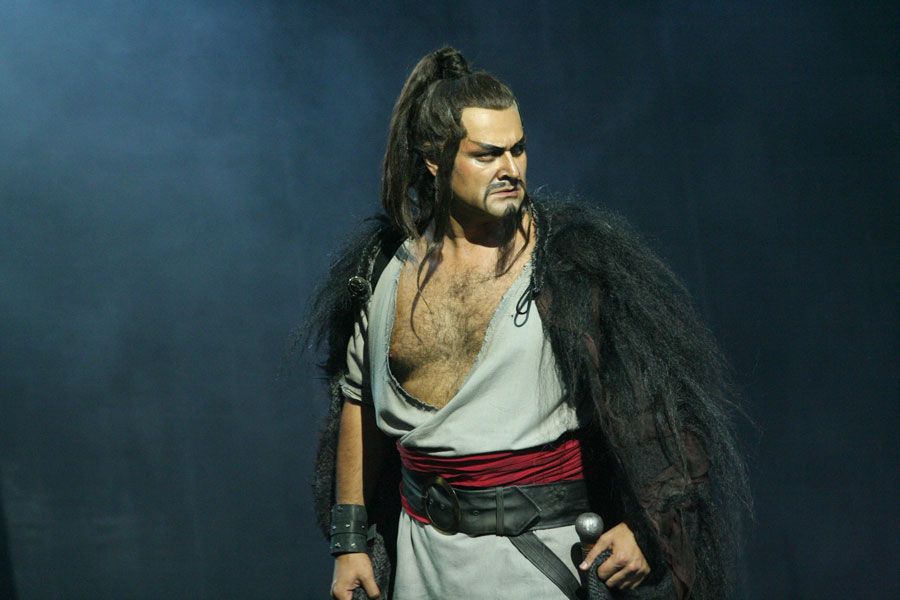 Aquileia and the Adriatic lagoons and the environs of Rome, circa mid 5th century.

Prologue
As Attila and his warriors have triumphed over Italy, Attila’s prisoners include Odabella, the daughter of the ruler of Aquileia who fell on the battlefield. Odabella creates a great impression on Attila. He presents her with his sword and takes her into his entourage. Ezio, a Roman general, comes to parley with Attila, but the latter rejects his proposal. Meanwhile Foresto, Odabella’s betrothed, arrives at Rio-Alto and urges the refugees from Aquileia to build a new city – Venice.

Act I
Meeting Foresto, Odabella convinces him that she has not betrayed the Italian cause. She was merely awaiting an opportunity to settle accounts with the tyrant and kill him. Meanwhile, Attila is trying to shake off the memory of a nightmare he had the previous night: an imposing old man barred the Huns’ road to Rome. But his courage fails when the nightmare becomes a reality. Pope Leo enters the camp to prevent Attila’s advance on Rome. Attila recognises in him the old man from his dreams.

Act II
Foresto and Ezio, a guest at one of Attila’s banquets, lay plans for the defeat of the Huns. Foresto reveals that tonight the Huns’ leader is to be poisoned – the Roman warriors must be at the ready to attack the enemy camp at any moment. Sinister omens darken the atmosphere at the feast, and the king is only saved from being poisoned by Odabella’s intervention: unwilling to cede the right to revenge to anyone else, she warns Attila of the attempt on his life.
Attila declares that she shall be his bride the next day and then he will lead his warriors to Rome. Taking advantage of the general rejoicing, the girl urges Foresto, who has tried to poison Attila, to flee.

Act III
During the wedding ceremony, the Romans surround the Huns’ camp and, when they attack, Odabella stabs Attila.


Giuseppe Verdi’s musical drama Attila is a real historic blockbuster, comparable with the great 20th century films. The action unfolds in the year 453, and on stage we see barbarian hordes fighting Latin civilisation. The Huns and the Ostrogoths are being opposed by heroes led by the intrepid Roman Odabella (according to a legend set forth in The Elder Edda, Attila was killed in his sleep by one of his wives). The librettist Temistocle Solera abandoned the unfinished opera halfway through and departed for Madrid with his wife, the singer Teresa Rosmini. Verdi was never to forgive him for this. The libretto of Attila was completed by Francesco Maria Piave, and on 17 March 1846 the opera was performed for the first time at the Teatro la Fenice in Venice. In 1865 for the Opéra de Paris Verdi produced a version in French featuring ballet scenes.
Nightmares, ghosts, prophesies and omens all haunt Attila the warrior and the warrior maiden Odabella to an equal degree. And can there be a romantic opera without terrible storms, poison, intrigue and suffering because of love? But Attila is by no means a cheerlessly gloomy work. The story of the march of the Huns on Italy is laid forth with patriotic pathos and is projected onto the present day. The key word of the libretto is “patria” or “homeland”, and the death of the barbarian conqueror at the hands of the heroine aimed to give Verdi’s contemporaries hope that their homeland would soon be free.
If the logic of the actions in the opera is, at times, on the weak side (the result of working with two librettists!), then this is redeemed with interest thanks to the tension of the romantic passions and the broad scope. Verdi wrote the opera in large-scale and almost oratorical forms. A strong and heroic style dominates in most of the numbers, while in the outlines of the melodies one can make out the curve of an arch and in the orchestration one can hear the sounds of weapons. Passion and pathos rendered the vocal roles in Attila so difficult that in this sense the opera cedes nothing to Nabucco. The spotlight falls on the four main characters (soprano, tenor, baritone and bass) who are closer to superheroes in terms of vocal magnificence. All four come together in the final quartet, in addition to which each performs a long heroic aria which include recitatives, cavatinas and cabalettas with the other characters and the chorus. Some of these arias take up entire scenes in the opera – superhuman music! The soprano and tenor are, moreover, given touching romances.
In St Petersburg in the 19th century, Verdi’s art was followed with fervour. The marvellous Italian company and the equally brilliant Russian company “following eagerly in its footsteps” performed his new operas. In the 1840s in St Petersburg the public heard I Lombardi, Ernani and I due Foscari, while between 1850 and 1861 there came Nabucco, Il trovatore, La traviata, I vespri siciliani, Luisa Miller and Rigoletto. Russian music lovers’ passion for Verdi naturally resulted in the maestro’s being commissioned to compose the opera La forza del destino, which was premiered in 1862. In Nápravník’s era, the Mariinsky Theatre’s repertoire expanded to include Aida and Otello, and in the 20th century came Don Carlo, Macbeth and Falstaff... Strange though it may sound, Attila was first performed in Russia at the opera house in Odessa (as far back as 1849), but it was only staged in St Petersburg for the first time in 2010, making it Verdi's tenth opera in Valery Gergiev's repertoire. Anna Bulycheva