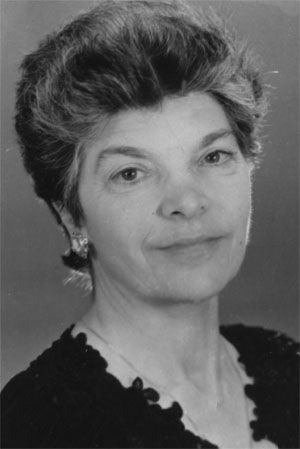 Born in the Primorsky Krai. Graduated in piano studies from the Moldovan Conservatoire in 1966. From 1968-1976 she worked with the Moldovan Theatre of Opera and Ballet. In 1976 she joined Leningrad's Maly Theatre of Opera and Ballet (now the Mikhailovsky Theatre), where she worked on productions of the operas Eugene Onegin, The Snow Maiden, The Queen of Spades, Boris Godunov, Khovanshchina, The Golden Cockerel, The Taming of the Shrew, Madama Butterfly, Don Carlo, Tosca and Don Giovanni.

Since 1989 she has been a concert mistress with the Mariinsky Theatre, working on productions of the operas Don Carlo, Otello, Madama Butterfly, Tosca, The Miserly Knight, La forza del destino, Aida, Pagliacci, Simon Boccanegra, Cavalleria rusticana. Has appeared at major concert venues both in Russia and abroad with such singers as Maria Bieshu, Lyubov Kazarnovskaya, Vladimir Galuzin and Larisa Diadkova.

At the Mariinsky Theatre, she works with soloists including Olga Borodina, Irina Mataeva, Tatiana Pavlovskaya, Vladimir Galuzin, Edem Umerov, Gennady Bezzubenkov, Sergei Alexashkin, Ildar Abdrazakov, Mikhail Petrenko, Yevgeny Nikitin and Alexei Markov. She has worked with Olga Borodina on the solo roles of Sergei Prokofiev's oratorio Ivan the Terrible and the Alexander Nevsky cantata, as well as with Olga Borodina and Ildar Abdrazakov together on the solo roles in Hector Berlioz' Roméo et Juliette symphonie dramatique and his opera La Damnation de Faust.

In 1996 she worked for Tel Aviv's Vocal Arts Institute on a production of the opera Iolanta. Has toured with the Mariinsky Theatre to the USA, the UK, Germany, Italy, Belgium, the Netherlands, Spain and Israel.