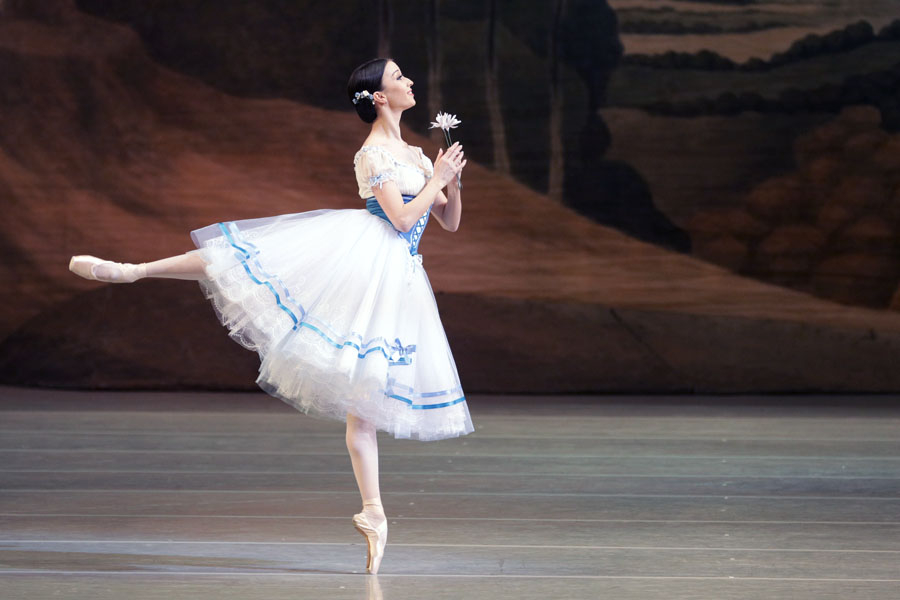 ballet by Adolphe Adam
No tickets

Act I
Count Albrecht, in love with the peasant girl Giselle, keeps his noble status a secret from her. Giselle’s other admirer Hans, a woodsman, tries to warn her that Albrecht is not who he claims to be, but Giselle doesn’t want to hear him. Left alone, Hans enters the hunter’s cottage and removes Albrecht’s sword with bears his noble coat of arms.
The sounds of a horn announce the arrival of a hunting party, amongst whom the Count’s betrothed – Bathilde and her father. They stop to seek rest in the village. The Count’s fiancée, charmed by Giselle’s innocence and beauty, gives the girl an expensive necklace.
The hunting party retires and the peasants begin a celebration of their own to mark the harvest. At the height of the festivities Hans appears. He accuses Albrecht of lying and shows the Count’s sword as proof. Giselle refuses to believe it. Then Hans blows the hunting horn and before the embarrassed Count his fiancée appears. Giselle is in despair. She loses her reason and dies.

Act II
It is midnight. Hans has come to Giselle’s grave. The Wilis appear – the ghosts of brides who died before their weddings – and frighten him. They emerge from their graves with a passion to dance the way they could not when still alive and anyone who happens to be in the graveyard at the time must dance till they drop dead. Myrtha, the Queen of the Wilis, summons Giselle’s soul from her tomb and initiates her into their order.
Count Albrecht comes to his beloved’s grave. His grief and despair touch Giselle. She forgives Albrecht.
The Wilis force Hans to dance until he is exhausted and, spinning round, throw him into the lake. The same fate awaits Albrecht. Myrtha forces him to dance. Giselle begs Myrtha to set Albrecht free but Myrtha is unmoved. Dawn breaks. With the rise of the sun the Wilis lose their power. Albrecht is saved. Giselle bids farewell to her beloved – this time forever...


Giselle is arguably the most mystical ballet in the repertoire today. Let’s start with the fact that its libretto is based on a fantastical story about a love that overcomes the barriers between two worlds. It is a story in which the young heroine, dying from a broken heart, mysteriously hears the call of ghosts tempting her to join their round dance, and having become one of them she saves the lover who betrayed her. In the era of romanticism, the apogee of searches in ballet came with Giselle which was created in 1841, and tales of other worlds were well familiar to audiences. Giselle, too, was an ideal embodiment of a romantic dual world where the living energy in scenes from real life in Act I is contrasted with the bewitching incorporeality of the dance of the wilis in Act II. It was not without the influence of this popular production that that the subsequent ballet repertoire was enriched with different shadows, nymphs and other inhabitants of visions. Besides the plot, the history of the ballet is also full of enigmatic transformations. These transformations may not always be mystical, often they are easily explicable in terms of logic, but they are reminiscent of a detective investigation as an attempt to establish those who created the ballet and their share of the input into creating the masterpiece Giselle, and they have ensured the fame of this incredibly mysterious ballet.
Even before the premiere there were legends surrounding the ballet, conceived by the fashionable Parisian news-maker, the litterateur Théophile Gautier, the popular and handsome dancer Lucien Petipa who rehearsed at the Opéra de Paris and the rising star of the ballet world Carlotta Grisi. The success of the dances, ascribed on Paris playbills to the choreographer Jean Coralli, brought Giselle to theatres in cities throughout Europe, including St Petersburg. Over time, in St Petersburg the choreographer Marius Petipa revised these dances to suit his own taste. The production today remains Petipa’s version. In the early 20th century it was performed by St Petersburg dancers in Diaghilev’s company in Paris, where by that time people had already forgotten about the erstwhile incredible glory of this masterpiece. The transformed Giselle once again enchanted audiences. And later researchers wove a story of a romantic relationship into the story of the romantic production, surmising that the creation of the ballet in Paris had included the involvement of Jules Perrot, the husband of the first performer of the title role, known to many from – alas – now lost productions. The list of choreographers who created Giselle brought together three great masters. And the transformation of the surname of the ballet’s composer Adolphe Adam to “Adan” on Soviet playbills continued the train of intriguing metamorphoses of Giselle.
In the 20th century the St Petersburg blueprint of Giselle came to be in great demand and a venerable guest production at many theatres across the globe. A greeting from the age of romanticism, this ballet has come to be an encyclopaedia of performance skill. Judging by interpretations of the lead roles offered by outstanding dancers from different countries and generations, one can study the dynamism of artistic trends and aesthetic preferences of different times. For many performers this production has been an exam of their capacity as an actor, and for a second century now audiences are captivated by the touching and dramatic story of a great love, told using the ideal harmony of classical dance. Olga Makarova

Running time 2 hours 10 minutes
The performance has one interval

Giselle
on the playbill