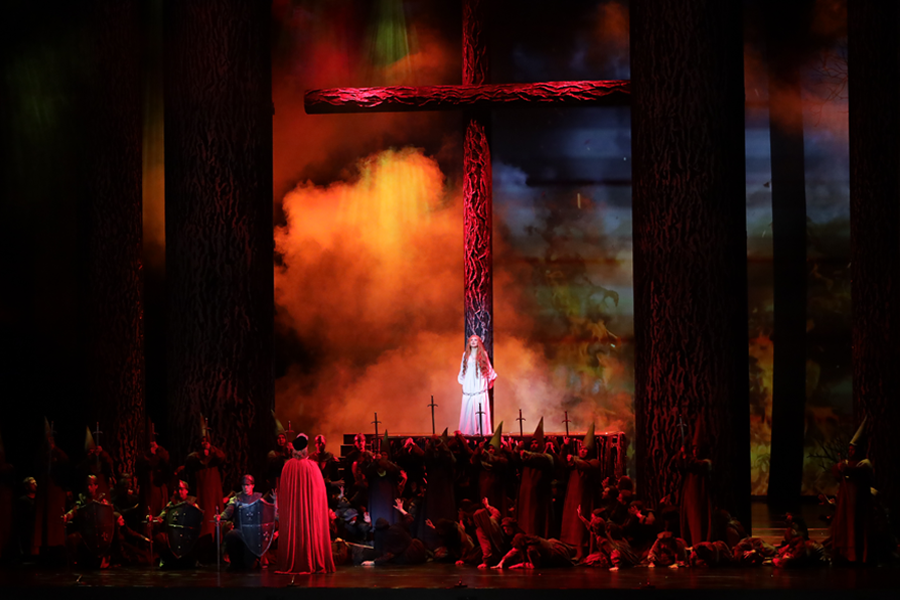 The Maid of Orleans

In accordance with revisions to Decree No 121 of the Government of St Petersburg,
from 28 January to 13 February 2022
minors will not be permitted to attend theatre performances

The action unfolds during the Hundred Years' War.

Act I
The little village of Domrémy. Young women are decorating a much-loved oak tree with garlands. Joan appears with her father Thibaut and Raymond, her betrothed. Thibaut is eager for the marriage to take place as soon as possible: in such dangerous times Joan should have a husband to protect her. The refusal of the girl, convinced that she has some other calling, enrages the father. He suspects that his daughter has made a pact with the powers of darkness, and so he rebukes her. The glow of a fire can be seen on the horizon and the alarm is heard. Peasants ruined by the English hasten in. The elderly Bertrand tells of what a desperate state the country is in: Orleans has been besieged by troops under the leadership of the unbeaten Salisbury. Unexpectedly for all, Joan announces that the troubles will soon be at an end, and she foretells the triumph of France. The people are amazed: "In these days, alas, the Lord creates no miracles!" "There are miracles..." exclaims Joan, "And a miracle has already occurred, the fearsome leader Salisbury has been reduced to dust!" No-one believes her. And yet a soldier who has arrived from Orleans confirms it: Salisbury lies dead. Having come to believe Joan, all pray to God. Left alone, the girl convinces herself that the time has come to act. She is gripped with a sense of nostalgia at being parted from her village and she hesitates. A chorus of angels can suddenly be heard. This inspires Joan to do battle.

Act II
At the Château de Chinon King Charles VII and his beloved, Agnès Sorel, are being entertained. Minstrels, dwarves, gypsies and jesters follow one another in a succession of songs, dances and amusements. The monarch orders the artistes be given food and drink and a golden chain each. Dunois the knight remarks that chains cannot be forged from words, that the treasury is empty and the troops are ready to desert. Agnès decides to donate her jewels to pay the wages and immediately goes to fetch her casket. The king admits to Dunois that it is possible to survive any unhappiness if one is loved by such a woman. "This is no time for love," objects Dunois, and he convinces the king to head the regiments. The king recalls that he is a knight and resolves on war.
The wounded knight Lauret hastens in with news of a battle lost and dies at the feet of his sovereign. Despairing, Charles decides to flee. Dunois spurns him and departs to die in battle. Returning, Agnès is amazed at the news but attempts to comfort her beloved.
Off-stage, fanfares can be heard: a miracle has occurred and the English have been defeated and routed. The Archbishop appears and confirms the news: at a critical point a maid appeared and seized victory from the hands of the enemy. The cries of the people and the pealing of bells can be heard. Joan appears accompanied by the knights. At her arrival, the king orders Dunois to take the position of monarch, himself hiding among the throng of courtiers. Joan, however, goes directly to the king. In response to his surprise, she admits that she saw him where "he was seen to none but God", and names the three prayers he said. All are stunned. "Who are you?" they ask her. She relates her story. The king entrusts his troops to Joan, and all delightedly welcome her.

Act III
Scene 1. Not far from the battlefield. the English and their allies – the Burgundians – have been defeated. Joan unarms the Burgundian knight Lionel. Raising her sword over him, in the moonlight she sees his face. Staggered by the youth's handsome features, Joan is unable to strike him down. Lionel, humbled by the girl's noble and generous behaviour, calls on her to follow him and leave behind her death-dealing sword. Joan is assailed by doubt. Dunois appears. Lionel throws himself at him and says that he is defecting to the French side. Dunois accepts his repentant enemy and relates that the battle is won and that the gates to the city of Reims have been opened to Charles VII, his coronation to take place at the cathedral there. Exhausted, Joan collapses into Dunois' arms; she has been wounded.
Scene 2. The square in front of the cathedral of Reims. A triumphant procession heads to the cathedral where Charles VII is to be crowned king. The people praise the maid and the king. Thibaut and Raymond appear in the crowd. Convinced that his daughter is in league with the Devil, Thibaut intends to restore her to God and "abandon the worthless adulation". Raymond entreats him not to kill the girl. The procession headed by the king leaves the cathedral. The king declares Joan to be their salvation and asks her to show her radiant and immortal face. Suddenly Thibaut appears before her and accuses his daughter of colluding with the forces of Hell. Joan remains silent, believing she has no right to defend herself: she has sinned and broken her vow by falling in love with Lionel. Dunois takes arms to defend her innocence. Just then, an almighty peal of thunder is heard. All step back from Joan. Again Joan's father demands an answer from her. There is another even more mighty peal of thunder. The Archbishop turns to Joan and asks her the same question – is she innocent? She makes no answer. There is yet more thunder, still mightier than before. In fear, all abandon Joan. Lionel offers her his protection, but with hatred in her voice Joan tells him that he is her worst enemy and she runs away. Lionel follows after her.

Act IV
Scene 1. In the forest. Hiding from the people, Joan is unable to overcome her emotions: her soul is burning with the flames of passion. In torture she thinks fondly of Lionel and greets his unexpected appearance with a joyful exclamation. A moment of sheer bliss. Joan hears the voices of the angels: she has disregarded the behest of Heaven – she has allowed earthly love into her heart – and so cannot complete her holy mission. She must submit to her ill-fated destiny without complaint – redemption will be her reward. The English suddenly appear and capture Joan while Lionel, trying to protect her, is killed.
Scene 2. A square in Rouen. A funereal procession: Joan is being led to her execution. She asks for a crucifix. Surmounting her fears, the maid climbs onto the pyre. "The Heavens have opened up and suffering is at an end!" are her last words.

The Maid of Orleans has always stood in the shadow of Tchaikovsky's other operas, and being presented with it has resulted in confusion, even among the composer's most ardent admirers. The authoritative Soviet music historian Boris Asafiev, for example, considered the work "masterful, though uneven", reprimanding its "false style" and "peculiar, pompous élan". The low evaluation of The Maid of Orleans can, to a great extent, be explained by its chronological proximity to (and inevitable comparison with) Tchaikovsky's most popular opera, Eugene Onegin. Following the lyrical "chamber scenes", here the composer unexpectedly turned to the genre of grand opéra with all its inherent attributes: a plot from an age of knights, a massive four-act structure, a ballet divertissement, the thunder of victory and fiery whirlwinds. Tchaikovsky was convinced of public acclamation, box-office success and of his "grand opéra" finding a stable place in the repertoire, though this was never fully achieved, either during the composer's lifetime or in the 20th century. One exception came with the Kirov Theatre's production in 1945 – its success to a large degree was down to Sofia Preobrazhenskaya, who appeared in the title role.

Succeeding a lengthy interval, last summer the Mariinsky Theatre staged a performance of The Maid of Orleans in concert and took the decision to bring it back to the stage, as the few generalised parts of the score are not a flaw but rather a nod of respect to the conditions of the genre of "grand opéra". Once one understands this, the merits of The Maid of Orleans become clear: the first-class music, the strong dramaturgy and the pathétique energy, rare in terms of its power. It towers above classical Russian operas, like the bulk of some Gothic cathedral – like that in Reims, here depicted in the final scene.

The opera is being restored to the repertoire of the theatre where it was staged for the first time one hundred and forty years ago. Back then, in 1881, Tchaikovsky was furious that no new designs had been produced for the premiere, instead borrowing the sets from other productions, and the new opus did not create the effect it ought to have done. Today the composer would be satisfied: in tandem with the designer Vyacheslav Okunev, director Alexei Stepanyuk has produced a true "grand spectacle". Moreover, the director was not content to be satisfied with a merely theatrical Gothic style: "We are not staging an historic opera 'about knights', but rather a romantic opera – a metaphysical one, even. Fire is the entire production's leitmotif, a symbol of all-consuming flame in which our whole world perishes with its madness of wars and hatred. And, with her saintly smile, the Maid of Orleans towers above these flames."