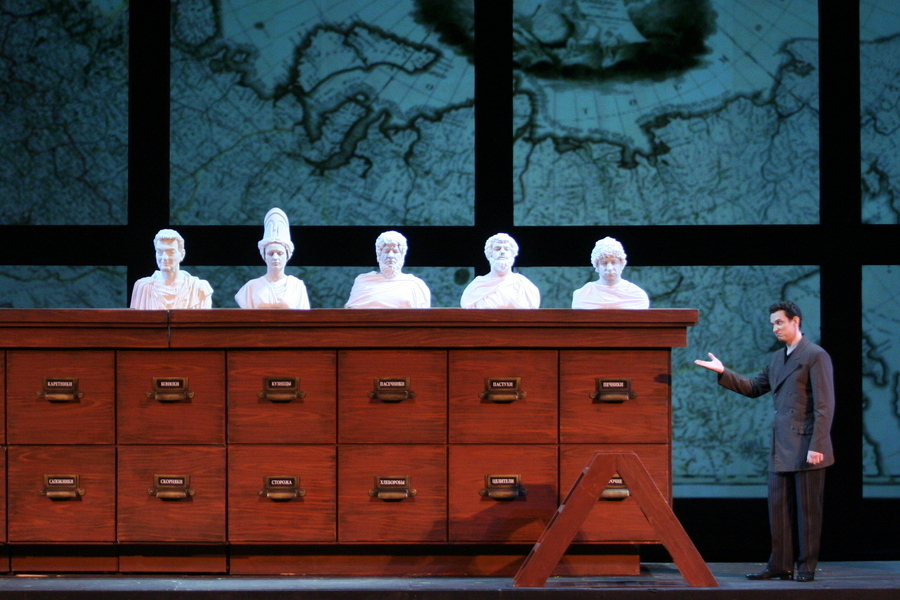 Act I
Scene 1. Introduction.
We hear the song The Snow Is not White, performed in the Russian folk style.
Scene 2. Lunch at the Procurator’s.
The dignitaries of the town of N are giving a lunch in honour of Pavel Ivanovich Chichikov, attended by Manilov, Sobakevich, Nozdryov, Mizhuev, the Governor, the Procurator, the Chairman of the Chamber, the Chief of Police and the Post Master. “Vivat, Pavel Ivanovich,” the town’s dignitaries proclaim in chorus, in turn treating Chichikov and speaking of their admiration for him. In turn, Chichikov lavishes compliments on the “town fathers”.
Scene 3. The Road.
A britzka makes its way along the road. Selifan is sitting on the coach-box, while Chichikov is in the carriage. Selifan sings the song Hey-Hey, My Hearties! He asks two approaching peasants “Is it far to Zamanilovka?” They reply that it is one verst to Manilovka, and that there is no such place as Zamanilovka. The britzka travels onwards.
Scene 4. Manilov.
The hospitable Manilov and his wife welcome Chichikov. “May Day... The name day of the heart…” Manilov sings tenderly, and croons an arioso in praise of his guest. Taking Manilov to one side, Chichikov offers to sell him dead souls. Manilov is taken aback and expresses doubt: “Will not such trade be at odds with Russia’s prospects?” But Chichikov easily explains that the opposite is the case. The Manilovs and their guest dream of the joys of life aloud. Suddenly Manilov notices that Chichikov has already disappeared. He stops and ponders: “Dead souls?”
Scene 5. A Pot-Holed Road.
On the road again. Selifan complains of the infernal darkness, Chichikov suggests looking to determine if the village can be seen. Bring, oh God, a Thunderous Cloud, sings the chorus.
Scene 6. Korobochka.
A room in the house of Korobochka. Korobochka laments the “poor harvests and losses”, telling Chichikov what wonderful workers have died recently. Suddenly Chichikov makes his offer: “Release them to me.” Initially Korobochka cannot make head or tail of what he is talking about: the deal is tempting, but unusual. The dialogue becomes increasingly tense. Both speak faster and faster, and in the end their words cannot be made out. A pantomime scene follows. At its height, Korobochka submits: “Why are you so glum? Allow me, I will give you them for fifteen assignations.” Chichikov disappears and Korobochka is left alone with her thoughts: “Why are dead souls walking today?”
Scene 7. Songs.
We hear the songs Don’t Cry, Don’t Cry, Beautiful Maiden, The Snow Is not White and You Are Wormwood, Wormwood Plant.
Scene 8. Nozdryov.
Nozdryov has just returned from the market – “unlucky at cards”. He sits down with Chichikov to a game of draughts. During the game, the dead souls are traded. Nozdryov tries to foist a puppy and a barrel-organ onto his partner... Chichikov accuses Nozdryov of cheating. A quarrel ensues, which slowly escalates into an unimaginable scandal. Suddenly the Captain Chief of Police appears: “Mr Nozdryov, you are under arrest... You are accused of causing personal abuse to the landowner Maximov with the birch whilst drunk...”

Act II
Scene 9. Sobakevich.
Chichikov is in Sobakevich’s study. Sobakevich abuses the town fathers to the last degree. Chichikov tries to carry on society small talk and refers to the “non-existent” souls. “You need dead souls?” asks Sobakevich, puzzled, naming an astronomical price – one hundred roubles per soul. The lengthy bartering process begins. From time to time during the talk, there are retorts from the portraits of Greek commanders justifying the fairness of Sobakevich’s arguments. In the end, the two sides come to an agreement.
Scene 10. Selifan the Coachman.
Endless road once again, and Chichikov’s britzka continues its journey. Selifan is singing a mournful song. “Is it far to Plyushkin’s?” he asks the peasants he passes, but he receives no reply.
Scene 11. Plyushkin.
Plyushkin complains about life and tells Chichikov that the damned fever took “a healthy number of peasants” from him. Chichikov appears as benefactor, proposing to buy all one hundred and twenty souls.
Scene 12. The Soldier’s Wife’s Lament.
A peasant woman laments her fate, having lost her son who was taken from her as a soldier.
Scene 13. The Governor’s Ball.
The guests are animatedly discussing Chichikov’s merits and wealth. The Governor’s daughter stands out among the dancers. Chichikov appears. All welcome him, congratulating him on his purchase of the peasants, not suspecting that it is a scam through which he hopes to obtain a mortgage on non-existent peasant property. The Governor’s wife presents the “millionaire” to her daughter. Suddenly Nozdryov bursts in and reveals the trickery of Chichikov’s deals: “I won’t leave you until I know why you have bought dead souls.” All are taken aback. But Korobochka appears, having come to town to find out “why dead souls are walking today.” This serves to increase the confusion of all...

Act III
Scene 14. Introduction.
Again we hear the song The Snow Is not White.
Scene 15. Chichikov.
The opera’s protagonist is in a hotel room. His entire cunning plot has collapsed in ruins.
Scene 16. Two Ladies.
Anna Grigorievna, “a pleasant woman in the fullest sense of the word”, and Sofia Ivanovna, “simply a pleasant woman”, have met to discuss the latest gossip. Anna Grigorievna confirms that with Nozdryov’s assistance Chichikov plans to flee with the Governor’s daughter.
Scene 17. Crowds in the Town.
The action unfolds in turns at the Chief of Police’s in drawing rooms and on the streets. All the characters in the opera are discussing the case of Chichikov. New and yet newer proposals are put forward. The Postmaster confirms that “Chichikov is none other than Captain Kopeikin...” “And isn’t Chichikov Napoleon dressed up?” asks the Procurator. Nozdryov relates that Chichikov is a spy, a fiscal inspector and a “man of State assignations”. Nozdryov then freely confirms that he has agreed to help Chichikov to flee with the Governor’s daughter. The anxiety grows. Unexpectedly it is announced that, due to the shock, the Procurator has died. The crowd is suppressed.
Scene 18. Mourning the Procurator.
A funereal procession led by the priest heads towards the graveyard. Chichikov is in his hotel room, continuing his interrupted monologue.
Scene 19. Finale.
Nozdryov tells Chichikov that he is thought to be a robber and a spy, “intent on spiriting away the Governor’s daughter”. Chichikov is frightened – it is time to flee. He calls for Selifan and orders the britzka be got ready. And once again the endless road, with Chichikov’s britzka trundling along incognito. Selifan is singing his song. A peasant with his goat and another bearded peasant are standing by the roadside. They chime in: “You see what a wheel! What do you think, will that wheel make it, should the chance arise, to Moscow or not?” “It’ll make it.” “As for Kazan, I don’t think it’ll make it that far…” “It won’t make it to Kazan.” And their song continues to resound...

“The idea of the composer was aimed at producing a vocal rethinking of Gogol’s prose,” Rodion Shchedrin wrote in an explanatory note to the opera Dead Souls. With unusual sensitivity the composer responded to everything that can be heard in Gogol’s great poem, and he laid this bare in the voluminous musical images, first and foremost the vocal parts. With Gogol, Selifan the coachman is given a “subtle and melodious voice” – in the opera this is a high tenor, moreover singing in the folk style. The sweet tenor bel canto comes with Manilov, whose voice Gogol described as “touchingly tender” (Lizanka Manilova, the female double of her husband, repeats him in the tones of a lyrical coloratura soprano). On reading a description of the gambler and layabout Nozdryov as a “man of great height and a somewhat narrow face”, and also blond, and taking into account the character’s fiery temperament, Shchedrin decided to make him, too, a tenor – a dramatic one. Nozdryov’s son-in-law Mizhuyev appears with Gogol as having a “lazy and lethargic” voice – in the opera this role is awarded to a low bass, in essence a voice that is not too flexible; when the hero falls into a drunken dream, his voice also reaches the lower depths of the range. Sobakevich, too, sings as a bass: only the mighty bogatyr voice with a broad range is suitable for a man who wears boots “of such a gigantic size that legs to match could hardly be found anywhere”. The club-headed widow Korobochka is a mezzo, as is Plyushkin, who is performed by a woman in men’s clothing. When Plyushkin first starts to sing, the audience shudders: “Oh, a woman” – exactly repeating the thought of Chichikov, taken up by Gogol, when he meets the degraded miser: “Oh, woman” (and a second later “Oh, no”). Moreover, the role of the old hoarder is markedly anti-vocal, as the author described his voice as “hoarse”.

Nabokov called Dead Souls a grandiose dream through which an idea of Russia is drawn – the “lyrical note” of Gogol’s poem. Thus, too, Shchedrin’s opera is structured. Its lyrical notes are focussed in the “road” scenes, which with their refrain are interwoven with caricature episodes. The composer has contrasted the living with the dead; he has rendered faces from among the people alive – a grieving soldier’s wife, and a bearded peasant at the roadside. In these scenes the singing is peasant-like rather than operatic; the author was assisted by aural experiences from his childhood, spent on the banks of the River Oka, where the composer-to-be heard shepherds, mourners and drunken songs. Gogol referred to a folk song by name – The Snows Are Not White; Shchedrin composed a refrain to these words, and it sounds like archaic Russian folklore, moreover a musical and theoretical analysis here highlights the links with composition techniques of the 20th century. Recurring many times throughout the opera, it is also folk singing that brings it to its conclusion. “Do not weep, do not weep, do not be sad” – the female voices sing, though the listener does indeed wish to cry, repeating after Pushkin: “My God, how sad our Russia is!”

Being, it would seem, fleeting intermedia links, the “road” scenes in the opera carry the main burden of the drama and the meaning. These were first of all dispensed with by Zinovy Margolin, designer of the production, who conceived a key visual symbol for Dead Souls in 2011 – two immense and slowly-turning wheels. Stage director Vasily Barkhatov narrates the story of the luckless affair of Chichikov, not tying it down to any specific era: the audience will recognise realities of the age of serfdom and of Soviet and post-Soviet Russia. In 2012 the dynamic, vivid, witty and bitter production by Barkhatov and Margolin was nominated for the Golden Mask award in a whole seven categories, and in that of “Best work by a designer in musical theatre” it won Russia’s most prestigious theatre prize. Khristina Batyushina