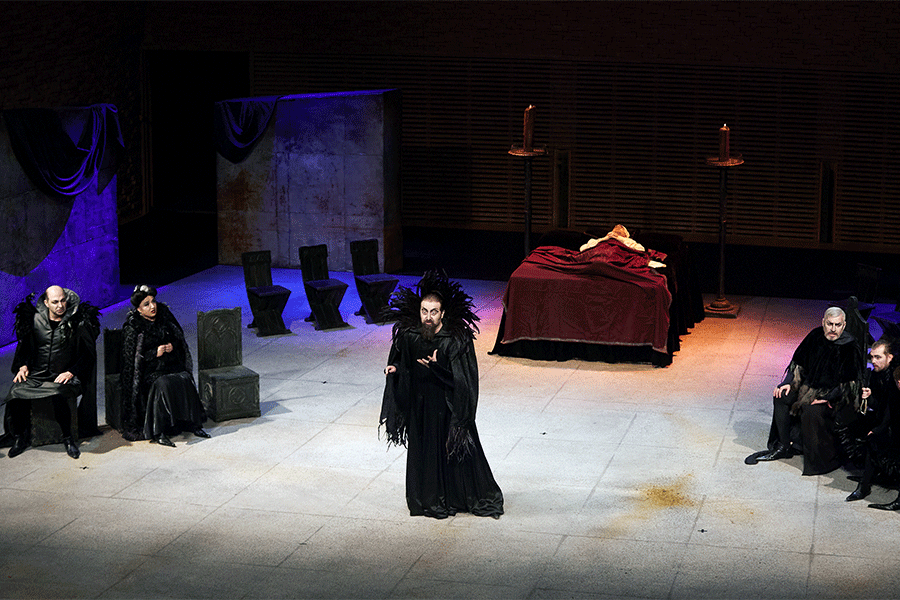 Setting Florence, 1299
The rich old Buoso Donati has died. His family express their grief to one another. However, in reality they are all thinking of the deceased’s will. There are rumours that he has left everything to a monastery in San Reparata. Surely this can’t be true? The relatives turn for advice to the seventy-year-old Simone, the cousin of the dead man, who was once mayor of Fuccecio. Simone says that if the will is in the house something may yet be done. Everyone starts to search for the document that will reveal the dead man’s wishes. It is found by Rinuccio, the young nephew of Zita, Buoso’s cousin. Unlike the deceased’s other relatives, he thinks little of money. His thoughts are taken up with Lauretta, Gianni Schicchi’s daughter. They love one another. But the elderly aunt is indifferent to the match. Zita promises her blessing on one condition – if the testament fills their pockets and there is no longer any need to think of the potential income from a dowry. Full of hope at the deliverance the will might lend, Rinuccio sends the young Gherardino for Schicchi and his daughter. The reading of Buoso Donati’s last will confirms the worst – all is to go to the monks. The relatives react with rage. Rinuccio suggests getting advice from Gianni Schicchi. Buoso’s relatives want nothing to do with him, considering him a vulgar peasant who is below them. Rinuccio defends the father of his beloved, praising the ingenuity of those who have, like him, come from outside Florence to make it a greater place. Gianni Schicchi appears with his daughter Lauretta. He is insulted almost from the outset, and the marriage refused on the grounds that Lauretta has no dowry to offer. Initially refusing to help, his daughter’s plea convinces him to intervene. Sending his daughter onto the balcony, Schicchi orders the body be taken into another room, the bed to be made and that all traces of mourning be removed. Suddenly there is a knock at the door – Dr Spinelloccio has come to see his patient. Hidden, Schicchi imitates Buoso Donati’s voice, telling the doctor he is much better and asking him to return later. The doctor leaves singing the praises of Bolognese medicine.
Gianni Schicchi reveals his plan. All are convinced that he can copy the dead man’s voice to perfection. And if he can imitate his appearance too then he can dictate a new will to the notary. The relatives are delighted and begin to discuss the division of the property. Outside the window a funeral bell sounds and excitement turns to terror – surely Buoso’s death has not been discovered? But it is a false alarm. One after the other, Donati’s relatives, unknown to each other, try to bribe Gianni Schicchi to give them the most valuable share of the inheritance. Schicchi promises to do as each asks, but reminds them that forgery is punishable by law and the penalty the cutting off of a hand. The relatives are worried. But even fear of a frightful punishment cannot stop them dreaming of riches. Having changed his clothes, Schicchi gets into Buoso’s death bed.
Accompanied by two witnesses – Guccio and Pinellino – Ser Amantio di Nicolao the local notary appears. The “dying man” informs him that his paralysed arm has left him unable to write, so his will must be dictated. He asks for “his family” to be present when the document is prepared. Then, after initially sharing the wealth as agreed, the false Buoso wills his most valuable property to his “great friend Gianni Schicchi”. The relatives are beside themselves in fury but are powerless. If they expose this crafty villain they will put their own necks in the noose. When the notary departs, all the cousins and their spouses fall upon Schicchi. But as the new master he orders them all out. Rinuccio and Lauretta are able to love in peace and sing of their future together. The old Zita cannot prevent their marriage. Gianni Schicchi turns to the audience and asks them to forgive him his little deceit because of the mitigating circumstances. Despite being banished to hell, he argues that all could not have turned out better. He says that the great Dante also forgives him and expresses his gratitude for providing the subject of the work.

Forging a will is a criminal offence, but what if some desired good is about to escape one’s grasp for that of another? And there are many others: the dead man has left no direct heir. In the fight for his property, an aristocratic family is transformed into a band of scammers; not only is the will a forgery, but so is the testator! But the scammer may also have been made a fool of – if an experienced rogue deftly replays a game of cheating for his own ends.

The plot of Giacomo Puccini’s one-act opera Gianni Schicchi seems to be rather grotesquely macabre, though in life such things do happen, at least according to Gemma Donati, a representative of a respected Florentine family and the wife of Dante Alighieri. A certain actual real-life Gianni Schicchi once had Gemma’s relative wrapped around his little finger, just like his operatic namesake. Dante sent his offender straight to the eighth – and second last! – circle of Hell. The playwright and librettist Giovacchino Forzano also found a forger there. He made a scoundrel into a charming rogue, one of the gente nuova (“new men”), a man of the future, contrasting Gianni Schicchi’s strong peasant roots with the fecundity of the Buoso family, artistry, free-thinking and ingenuity with greed, arrogance and hypocrisy. In his work Forzano relied not only on lines from the thirtieth song from Hell but also on detailed comments to La divina commedia, which were published in abundance in Italy in the late 19th and early 20th centuries. The libretto turned out to be magnificent: compact, dynamic, dramatically justifiable and also with vivid Italian colours, referring back not only to Dante but also to Boccaccio and to the tradition of folk teatro dell’arte.

In Puccini’s art Gianni Schicchi stands apart: it is the only comic opera in the maestro’s legacy and one of the finest opere-buffe of the 20th century. According to the laws of the genre, the plot unfolds in the ensembles; in essence, this entire hour-long opera is a large, complex and virtuoso ensemble. Reading the list of characters in the programme, it is initially difficult even to understand who comes to whom and how, and yet as soon as the characters begin to appear on the stage (and everyone goes to the start of the treasure hunt at the same time), thanks to Puccini’s music everything very quickly becomes clear. In just a few strokes of the pen, the composer succeeds in writing down the personality traits of each of them. The musical fabric is imbued with leitmotif themes, capacious ostinato motifs that bring together an entire kaleidoscope of faces and situations. One of the most witty and significant is the leitmotif of “grief” that opens the opera with exaggerated second-long sobs and sighs depicting the lamentations of “inconsolable” relatives.

In all of this dark comedy there is also a lighter side – one of the Buoso family nevertheless understands that it is in love and not in money that happiness is to be found. If Puccini uses the modernist musical language of the early 20th century that is sharpened by dissonances for satire, then the lyrical pages of the opera are filled with melodious beauties that are so delightful that an involuntary thought creeps in: but isn’t the soft, ironic smile of an already middle-aged master hiding here too? Let’s say, in the famous aria of the young Lauretta Schicchi who – ah! – will throw herself in the river if her father will not help her be reunited with her beloved.

At the Mariinsky Theatre Gianni Schicchi is performed the same evening as Suor Angelica; the Italian production team has brought the parts of Il trittico to a common artistic denominator. On the stage it is dark, and all of the Buoso family are dressed in black: birds of a feather, it can be seen immediately. “Playing” against the blacks are the reds, the Schicchi family. Ultimately, the entire flock of crows is driven away, and then the huge window bursts open. This is ensured by a comment by the composer: a young man and a girl admire Florence and dream of an earthly paradise. Audiences at the first performances in 1918 understood them like nobody else: the First World War had only just ended, and hope had emerged that the very worst was behind them. The futurological prognosis of the modern-day production team, alas, is much more careful. Khristina Batyushina