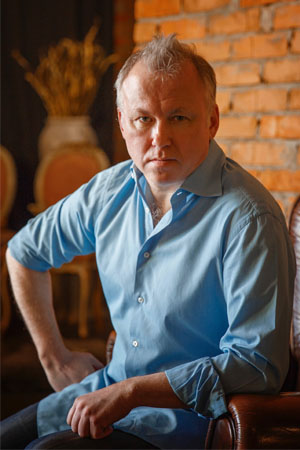 Mikhail Sinkevich was born in Moscow. In 1987 he graduated from the Middle Special School of Music of the Belorussian State Conservatory and entered the Choral-Conducting Faculty of the Rimsky-Korsakov Leningrad State Conservatory. In 1990 he continued his studies at the Faculty of Opera and Symphony Conducting, which he completed in 1994 (class of Professor Ilya Musin, People’s Artist of Russia).

As a student, Mikhail Sinkevich worked at the Opera and Ballet Theatre of the St Petersburg Conservatory and the Zazerkalye State Children’s Music Theatre. Following his debut with the State Academic Symphony Orchestra of Belarus in 1994, he was invited to join the National Academic Bolshoi Opera and Ballet Theatre of the Republic of Belarus. From 1997 to 1999 he was Principal Conductor of the Belorussian State Academic Musical Theatre. From 2003 to 2006 he was Principal Guest Conductor of the St Petersburg Kamerata symphony orchestra.

Regularly conducts concerts at the Mariinsky Theatre and the Concert Hall together with the theatre’s soloists. Tours with the Mariinsky Opera and Ballet throughout the world, and has appeared at the Metropolitan Opera, the Royal Oper House in Covent Garden, the Festspielhaus (Baden-Baden), in Los Angeles, Washington and at the Salzburg and Melbourne festivals. Collaborates with opera houses in Russia (Bolshoi Theatre and the Novosibirsk, Perm and Kazan Opera Houses) and abroad, in Belarus, Germany, Croatia and other countries.
Since 2013 he has been Principal Conductor of the Musical Theatre of the Republic of Karelia (Petrozavodsk), where as conductor and musical director he staged The Queen of Spades, Iolanta, Cavalleria rusticana, Elisir d’amore, Il barbiere di Siviglia and Die Zauberflöte.

In 2009 Mikhail Sinkevich made his debut at the New National Theatre in Tokyo, conducting the first performance in Japan of Dmitry Shostakovich’s opera Lady Macbeth of Mtsensk. In 2012 together with the Wagner Stiftung (Germany) as a production-conductor he led the premiere of the opera Der fliegende Holländer in Donetsk – that production was subsequently performed to great acclaim in Kiev, Lviv and Odessa, as well as on tours to Germany.

For many years he collaborated with the National Theatre of Croatia in Zagreb, which hosted premieres of Tchaikovsky’s Mazepa (2010) and Verdi’s Il trovatore (2011), and he also conducted the operas Un ballo in maschera, Carmen, Rigoletto and Jenůfa (2015) among others. Other international appearances by Sinkevich in recent years include a concert performance of Eugene Onegin in Prague and a new production of Nabucco at the Sofia National Opera (2016).