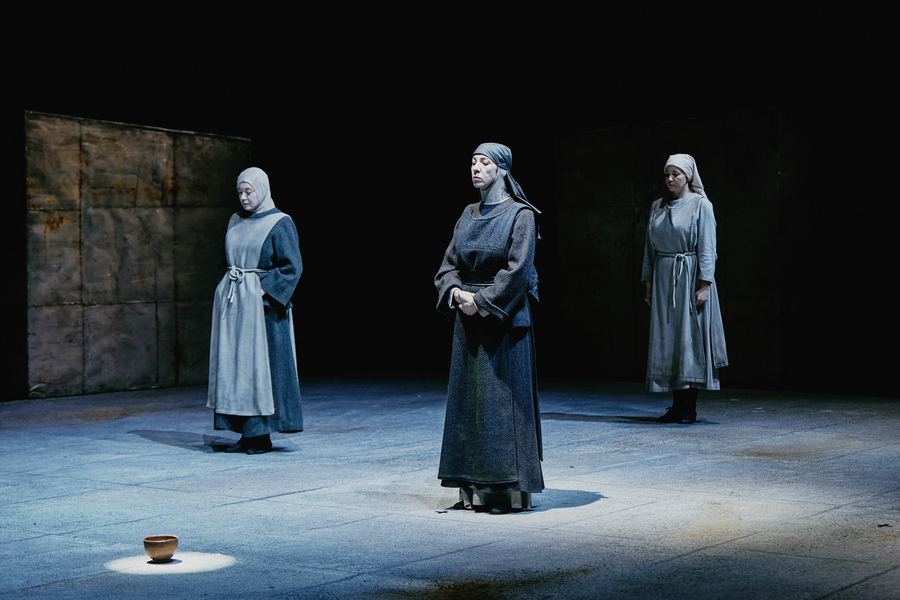 
The plot of the one-act opera Suor Angelica unfolds in a convent; it comes as no surprise that in this opus there is not one solo male voice. Apropos, nothing prevented Giacomo Puccini and his librettist Giovacchino Forzano from including, for example, the figure of some priest or jilted lover in the plot. Puccini, however, was consciously writing a deeply feminine opera, moreover not merely with regard to the tessitura: Suor Angelica is a musical drama about a woman’s psyche, about the mystery of the “eternal feminine”, about the power of a woman’s emotions, not passionate but maternal.
The sisterhood isolated beyond the walls of the convent is initially presented as a group portrait. A May day, a garden with a fountain, birds and bells ringing: at first glance, the convent seems like heaven on earth. Gradually, the focus narrows and different types and personalities emerge. Finally, at the centre of attention there is Sister Angelica – the daughter of noble parents who at some point in the past scandalised her family through an illicit liaison. The delicate, pastoral and at times utterly impressionistic sound palette is replaced by a tense psychological duel, followed by a stunningly expressive monologue of a mother who for the second time – now irretrievably – has lost her child and, with that, any meaning of life.
Throughout the opera there flows the theme of guilt and forgiveness: from charming pranks (like giggling while working or a rose tucked inside a sleeve), the cost of which is a prayer “out of turn”, to the gravest sin of suicide, atoned for by the torments of the heroine and her love for her son. The woman with no compassion – the Princess – is transformed into a weapon of Hell; she is opposed by the heavenly image of the Mother of God, perfect in her all-forgiving love. The emotional depth of the opera is colossal, it is in vain to resist the force of its influence, and tears in the auditorium are inevitable – as Puccini had wished.
When working on the score, the composer used all the richness of the sound scale of the early 20th century, including a luxurious late-Romantic orchestra with celesta, harp, bells and organ. The transparent chamber episodes are interwoven with elements of breathtaking tutti; the necessary Catholic entourage is created by echoes of a Gregorian chorale. The jewel in the crown of the opera is Sister Angelica’s aria Senza mamma, one of the most beautiful soprano arias in the international repertoire.
It remains but to guess why the public did not immediately see the merits of Suor Angelica: at the premiere, which took place at the Metropolitan Opera on 14 December 1918, it was overshadowed by the other parts of Puccini’s Il trittico – Il tabarro and Gianni Schicchi. The composer considered it to be the finest of the three.
In the Soviet Union Suor Angelica remained banned due to the religious motifs in the plot; only the first and third parts of Il trittico were performed. In 2003 at the Mariinsky Theatre – for the first time in Russia – Puccini’s triptych was staged in its entirety. The team behind the production – compatriots of the opera’s creators – avoided absolutely all melodrama and sentimentality. It is a monochrome, minimalistic production, where the convent is rather more reminiscent of a prison: there are neither roses nor a fountain, only bare grey walls. From the very start the sisters are disunited: even when talking they remain distant from one another, each in her own loneliness. The cold set designs contrast with the vivid emotional quality of Puccini’s music. The production team (stage director Walter Le Moli, designer Tiziano Santi and music director Gianandrea Noseda) remind the audience that this opera about a convent in the 17th century was written during the years of the First World War, at the time of a historic cataclysm, when the loss of that which is most precious – one’s family and the meaning of life – was a bitter reality of the age. Khristina Batyushina