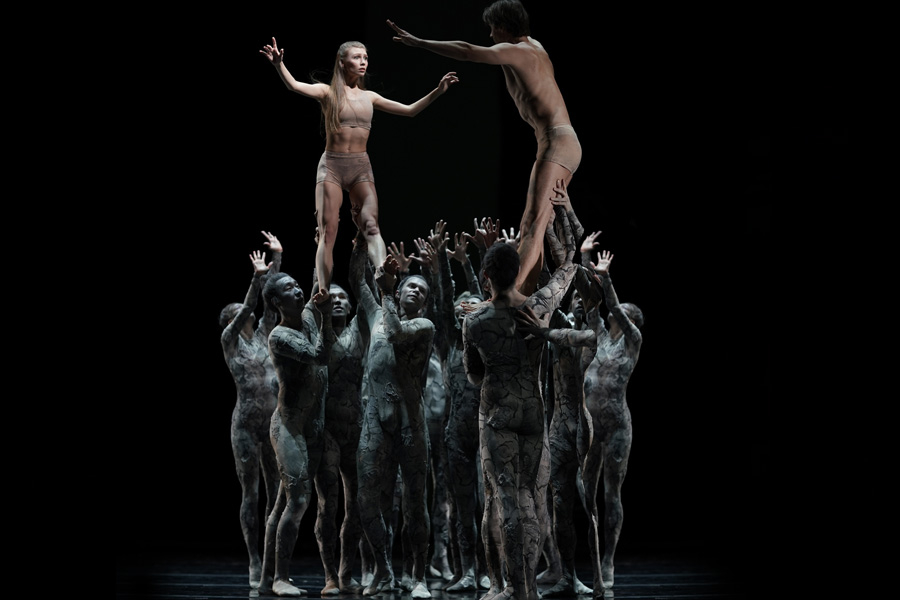 She: Daria Ustyuzhanina
He: Maxim Zyuzin
The Fate of Youth: Tatiana Tkachenko
The Fate of Maturity: Nadezhda Gonchar
The Fate of Old Age: Alexandra Iosifidi

Using a symphony in ballet is a 20th century innovation. The impulse for the worldwide dissemination of the genre of the dance symphony came with a production by Fyodor Lopukhov in Petrograd in 1923 with a ballet set to the music of Beethoven’s Fourth Symphony. George Balanchine, who took part in that avant-garde production, took up the idea of the plastique interpretation of the complex musical format, developing his artistic credo as a choreographer thus: “You see the music and you hear the dance.” Inspired by the nature of pure dance he rejected any plot and superfluous psychology, behind his movements there were no human passions, there was just the music, its rhythm and structure defining the development of the choreographic image. Following the same lines, in 1972 Balanchine created his first dance version of the score of Stravinsky’s Symphony in Three Movements. And yet there was another path in the emergence of symphonic dance. In the 1930s the choreographer Léonide Massine brought to life a whole series of symphonic ballets in which, avoiding fairy-tale narrative in a sequence of allegories and metaphors he narrated dance stories. The path chosen by Radu Poklitaru for his production of Symphony in Three Movements at the Mariinsky Theatre is close to Massine’s. In his production one can see a plot with a beginning, peripeteia and dénouement. The images conceived by the choreographer blend together with Stravinsky’s idea: the composer admitted that the third movement of his Symphony was a response to documental chronologies of the war years with lines of marching soldiers, and later with Poklitaru, it would seem, the troops come on-stage in the finale, without succumbing to the aggression of the first two movements... Olga Makarova

An interview with Radu Poklitaru >>