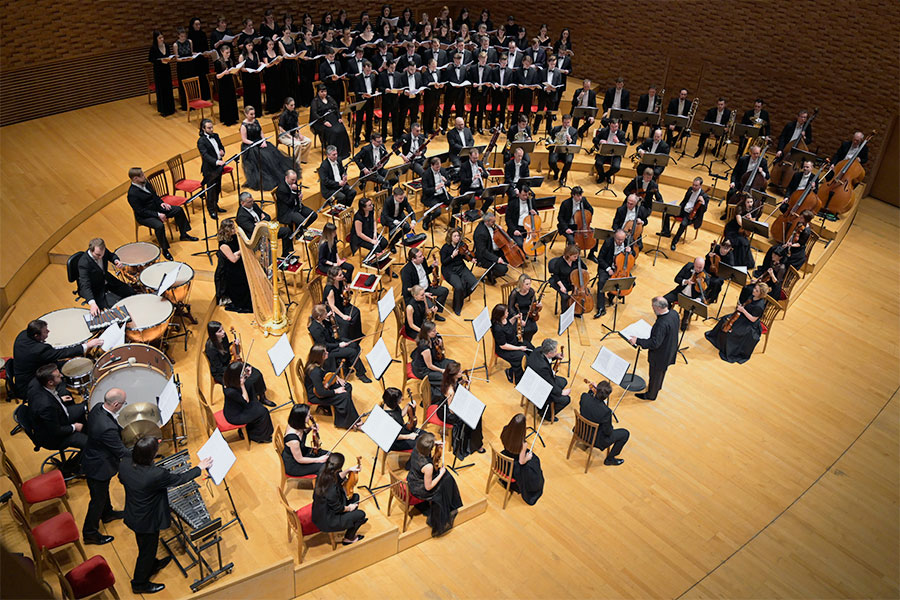 Poland in the 16th-17th centuries

Act I
The day is bright and summery. An open forest glade. Boleslav Chaplinsky meets with his fiancée Mariya. The young couple dreams of their upcoming wedding. The sound of horns is heard. “Once again Voyevoda tears over our cornfields with a crowd of his godless friends,” remarks Chaplinsky. “He is so powerful, nobly born and of the highest station that he does not even fear the king himself. Law and truth are nothing to him.” Mariya tells her fiancé how she once met Voyevoda in the forest. He seemed confused and embarrassed. Wishing to avoid seeing Voyevoda, Chaplinsky and Mariya go deep into the forest.
Voyevoda appears with his guests and hunters. They are stationed at the glade. The guests include Pani Yadviga, Voyevoda’s flame. Voyevoda himself is sullen and does not partake in the festivities. He cannot forget the beauty he recently saw in the forest. The guests wander off into the forest. Mariya appears at the forest glade. Voyevoda’s passionate declaration frighten her. She wants to escape, but Voyevoda blocks her way. Having heard Mariya’s call, Chaplinsky appears from the forest. Voyevoda orders his servants to seize Chaplinsky and leave him in the forest. The guests return. Voyevoda announces that he is to marry Mariya.

Act II
At night, Yadviga comes to the cabin of the beekeeper and sorcerer Dorosh. She wants to know her future. Dorosh does his magic and prophesies that Voyevoda is to marry Mariya. Gnawing jealousy and hatred for her rival make Yadviga beg for a mortal poison from Dorosh. She promises her heart to Olesnitsky, a young man who is in love with her, in exchange for his help in dealing with Voyevoda. Voices can be heard in the forest. Those are Chaplinsky’s friends. They have gathered together to plan and plot Mariya’s rescue from Voyevoda. Nobleman Poslavsky suggests to attack the castle on the day of the wedding and free Mariya. Yadviga overhears their plot.

Act III
Pan Voyevoda’s wedding feast. The merry feast is in full swing. Only Mariya is pale and thoughtful. A lively Polonaise plays and the guests walk out into the garden. Yadviga appears. As no guests are around, Yadviga wants to seize her chance and pour the poison into Mariya’s goblet. Voyevoda appears with his guests and Yadviga has to tell him that she is come to warn him about the plan to invade the castle. Her words are confirmed by shots in the garden. A group of armed nobles led by Chaplinsky bursts into the hall. A violent fight ensues.

Act IV
The castle, next morning. Chaplinsky has been captured and awaits his execution. In response to Mariya’s pleas to take mercy on Chaplinsky, Voyevoda demands: “Quickly, set up a scaffold in front of the castle, and send a priest to Chaplinsky. Summon the guests here, and make sure the hangman is ready in one hour.” Olesnitsky hurries from the garden to the hall carrying glasses of wine for the newlyweds. Yadviga orders him to pour poison into Mariya’s goblet. When Voyevoda talks with Yadviga, he regrets having cheated on her and tells her that only she can make him happy. Yadviga’s self-esteem is restored. Olesnitsky sees Yadviga in Voyevoda’s arms. Outraged by her villainy, he decides to poison Voyevoda instead of Mariya. Olesnitsky enters the hall with the guests and gives goblets full of wine to the newlyweds. Chaplinsky is led in under guard. Voyevoda wants everyone to see what bitter fate awaits he who dares to attack Pan Voyevoda. The poison takes swift effect and Voyevoda drops dead. Mariya orders the servants to free Chaplinsky.