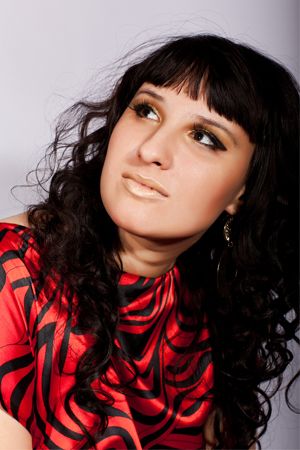 Born in Novosibirsk. In 2009 she graduated from the Perm College of Music, having specialised in piano and vocals. Trained at the faculty of solo singing at the Perm State Academy of Art and Culture (class of Olga Liyka, a soloist of the Perm Opera and Ballet Theatre). In 2012 she was accepted into the Mariinsky Academy of Young Opera Singers.

In 2018, Tatiana Starkova performed the role of Manon Lescaut and Aida at the Mariinsky Theatre branch in Vladikavkaz.

Together with soloists of the Academy she appears in subscription series concert programmes as well as a series of concert performances of Soviet operas including Into the Storm by Khrennikov and Colas Breugnon by Kabalevsky (Jacqueline). The soloist’s repertoire includes the roles of Zemfira (Aleko), Leonora (Il trovatore), Tatiana (Eugene Onegin), Oxana (Christmas Eve), Natasha (Khrennikov’s Into the Storm), Natalia (Dzerzhinsky’s Quiet Flows the Don).
Has toured to the China, Russia.