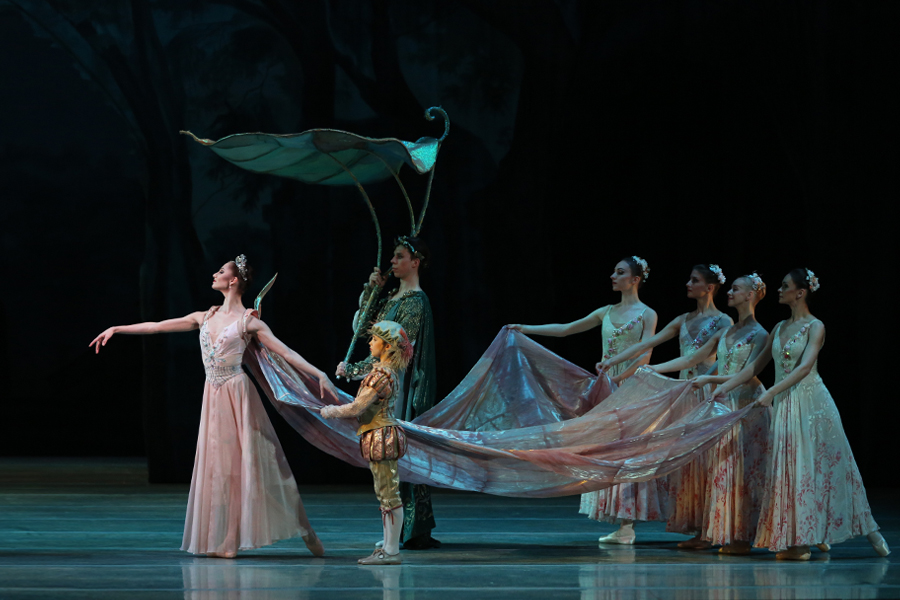 Act I
The action unfolds in a forest near the Duke’s palace. Oberon, King of the Fairies and Elves, has quarrelled with his wife Titania. Oberon orders Puck to bring a flower pierced by Cupid’s arrow (which causes anyone coming under its influence to fall in love with the first being the eyes behold) and, while Titania is asleep and unknowing, he casts the flower’s spell over her. Meanwhile, Helena, wandering in the forest, meets Demetrius whom she loves but who does not love her. He rejects her and goes on his way.
Oberon watches and tells Puck to use the flower on Demetrius that he may return Helena’s affection. Another couple, Hermia and Lysander, very much in love, are also wandering in the forest. They become separated. Puck, eager to carry out Oberon’s orders, mistakenly anoints Lysander. Helena appears and Lysander, under the flower’s spell, at once and to her amazement tells her how much he loves her.
Hermia now returns. She is astonished and then dismayed to see Lysander paying attention only to Helena. Puck manages to bring Demetrius, too, under the flower’s spell, much to the delight of Helena, who doesn’t care for Lysander at all. Demetrius and Lysander, now both in love with Helena, begin to quarrel over her. Puck, at Oberon’s order, separates Bottom, a weaver, from his companions, transforms his head into that of an ass and places him at the sleeping Titania’s feet. Awakening, Titania sees Bottom, thinks him handsome and pays him close and loving attention. At last Oberon, his anger over, has Bottom sent away and releases Titania from the spell.
Hermia now gets no attention, Helena too much. The men, completely at odds, quarrel seriously and begin to fight. Puck uses his magic to separate them and wander apart in the forest until they fall asleep, exhausted. In the meantime, Puck brings Helena to Demetrius and makes her fall asleep beside him while he leaves Lysander (the spell now removed) with Hermia.
The Duke and Hippolyta discover the lovers asleep in the forest, awaken them, find their differences are resolved and proclaim a triple wedding for themselves and the two couples.

Act II
In the Duke’s palace there are parades, dancing and divertissements in honour of the newly married couples. When the celebrations are over and the mortals retire, we return to the demesne of Oberon and Titania, who are now reunited and at peace. At last Puck, having put order into disorder, sweeps away the remnants of the night’s doings. The fireflies twinkle in the night and reclaim the forest.

This work by the outstanding American choreographer George Balanchine was christened by critics as “a dream about Russian ballet.” That is, in fact, what it is; George Balanchine, once called Georgy Melitonovich Balanchivadze, the son of a Georgian composer and graduate of the St Petersburg Conservatoire, never forgot his childhood in St Petersburg, which he spent at the Imperial Theatre School and at the Imperial Mariinsky Theatre. These memories run vibrantly through all of his art and provide a strong and stable foundation for his artistic innovations and new choreographic language that became the essence of 20th century ballet.
But Balanchine was no trumpeter of nostalgia. He was a modernist to his very fingertips, and it is rejoicing, not sadness, that is connected with imagery of his childhood in St Petersburg and the imperial ballet. Neither is it illustrative images but rather classical forms moulded into new tempi and ultra-contemporary rhythms, the architectonics of spatial structures that refer back to both the ballet ensembles of Petipa and the architectural ensembles of Rossi. It is these kinds of reminiscences about St Petersburg that flow through Diamonds, Symphony in C, Ballet Imperial (Piano Concerto No 2), Theme and Variations and many more of Balanchine’s works besides. But how was it that A Midsummer Night’s Dream, a Shakespearian tale, also came to be associated with St Petersburg in his mind? It’s all very simple. In his childhood years, as a pupil at the Theatre School George appeared in many performances of the Imperial Theatres, one of which was Shakespeare’s A Midsummer Night’s Dream to music by Felix Mendelssohn at the Mikhailovsky Theatre. That was in 1917 and he performed the role of an elf; soon that era collapsed and vanished, ushering in the utterly different, mad and constructivist 20s – Balanchivadze was actively involved in the culture of the time until he fled Soviet Russia in 1924. In 1958, now the great Balanchine – the founder of American ballet in particular and ballet neo-classicism as a whole – was asked to stage the dance entrances of the fairies and the elves in a production of A Midsummer Night’s Dream for the Shakespeare Festival in Stratford staged by Jack Landau. (Apropos, one of the founders of the festival was none other than Lincoln Kirstein, who in 1934 had the life-changing idea of inviting specifically a Russian from among the countless Russian dancers wandering around Europe to work at the School of American Ballet that he dreamed of: a former member of Diaghilev’s company and, at that point in history, the director of a small company in Paris with the provocatively temporary name of Les Ballets 1933. That Russian was George Balanchine.) The music in the 1958 production was not by Mendelssohn but rather that of Marc Blitzstein, a man of Brechtian character, the author of the musical The Cradle Will Rock and the translator of the texts for Die Dreigroschenoper (The Threepenny Opera), though working on Shakespeare’s play, one way or another, must have reminded Balanchine of St Petersburg. In any case, some time later (1962) he staged his own A Midsummer Night’s Dream to music by Mendelssohn, a ballet that was totally atypical for him: it had a plot, there were two acts, it had costumes, sets and numerous characters (his typical ballets were plot-less, in one act and conceptually performed in rehearsal clothes with the action being portrayed not by characters but by dancers, like the voices of a choreographic score).
The Dream was to be what was Balanchine’s only work in which references to the forms of St Petersburg ballet performances from his childhood years would appear so directly. Not the stylisation, of course – that never interested him at all, it was those latent rhythms of American urban culture, the contemporary speeds which run through all of the mature Balanchine’s new classicism, mixing and merging with bewitching lentos. Yet, at the same time, there are those very same ancient forms, those very same artistic collisions which, it would seem, Balanchine had abandoned once and for all: pantomime as the antithesis of dance, the grotesque as the antithesis of classicism and, indeed, the very image of a ballet dream that formed the core of almost every single work by Petipa. Only with Petipa the dreams, governed by pure classicism, were expressed in the choreographic “drama” with its indispensable plot and dramatic effect, shaking off its “reality” for the sake of the triumph of dance; while here the lightly stirring plot is as if asked by Balanchine to visit the choreographic world of new classicism where it was dance that had long since become the selfsufficient content, meaning and language of ballet.
Inna Sklyarevskaya

Running time 2 hours 15 minutes
The performance has one interval

Sponsor of the production: Mr Toshihiko Takahashi
The Ballet of George Balanchine A Midsummer Night's Dream is presented by arrangement with The George Balanchine Trust and has been produced in accordance with the Balanchine Style® and Balanchine Technique® service standards established and provided by the Trust