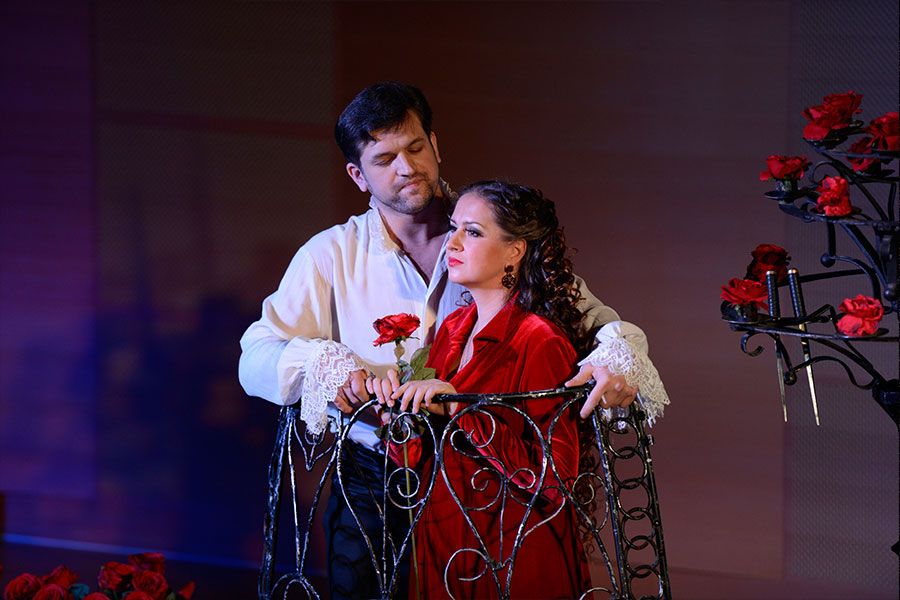 The fate of Maddalena (Op. 13) is well worthy of its thirteenth – unlucky – opus number. It was but by a miracle that the score in its final version was completed by the composer in his last “lucky” year in Russia in 1913!
“In the summer of 1911 I composed the one-act opera Maddalena” after the eponymous play by Baron Lieven, Prokofiev recalled in his Autobiography. “I hoped that it could be staged at one of the conservatoire’s performances... But my hopes were unfulfilled... I composed the music quickly, but only orchestrated one of the four scenes. In 1913 I recomposed Maddalena but again did not orchestrate it.”
It was under the pseudonym “Baron Lieven” that Magda Gustav Lieven-Orlov published her poems and dramatic works. The plot of Maddalena bears resemblances to Oscar Wilde’s unfinished drama A Florentine Tragedy. Before us we have a melodrama about love, on the one hand stylised in the manner of del Boccaccio, dell’Aretino or Cellini, and, on the other, there is the highly complex demonic figure of the heroine amended with the sharp wittiness of an intellectual drawing-room.
The Renaissance, so to speak, through an obscured looking glass of decadence... Venice in the early 15th century. In the evening the beautiful Maddalena is at home awaiting the return of her husband, the artist Genaro (Scene 1). In the rays of the setting sun boats with the women’s beloved approach and in the distance a gondoliers’ chorus can be heard. Maddalena and Genaro’s meeting and passionate duet (Scene 2) is interrupted by the arrival of Genaro’s friend the alchemist Stenio (Scene 3).
Maddalena is hiding behind a curtain. Stenio tells his friend of his beloved – an unknown beauty who has bewitched him but will not reveal her name to him. Stenio is both jealous and suspicious. The denouement occurs at the same time as an unexpected storm (Scene 4). The gale brings down the curtain and a flash of lightning illuminates the hiding Maddalena, in whose face Stenio recognises the mysterious temptress. The two friends are ready to dispute the affair in court over their faithless lover, but Maddalena incites them to undertake a duel. In the fatal battle both die. Maddalena mourns neither: “Which of you was loved by Maddelena? Perhaps neither of you…” Recollecting herself, she looks out of the window and calls for help: “Come here! Help! My Genaro! They’ve had a quarrel! A stranger has killed Genaro!”
Nikolai Myaskovsky, to whom Prokofiev dedicated Maddalena, lavished praise on the opera of his young friend: “... In terms of tension the style of the opera makes one think of Richard Strauss, only without the latter’s banalities. It is a great pity that such a work could hardly be mounted here in Russia, despite its stage qualities. I have never come across more demanding vocal roles and in terms of approval from the ‘greats’ there is no chance whatsoever.”
A production of the opera was not possible at either the conservatoire or the so-called Free Theatre in Moscow, nor at the Zimin Private Theatre or even at concerts of the Association of Modern Music in Moscow... From the mid 1930s all traces of the opera were lost by the composer himself. The manuscript was only discovered in 1954 in the archive of the Editions Russes de Musique in Paris.
In the 1970s at the request of the composer’s widow Lina Ivanovna Prokofieva, the acclaimed British conductor Edward Downes was introduced to the manuscript of Maddalena, he being an admirer and promoter of Prokofiev’s music. Based on the composer’s indications in the clavier and a study of the composer’s style, Downes completed his instrumentation of the opera and performed it on BBC Radio on 25 March 1979 (twice in one day; first in Russian and then in an English translation). On 28 November 1981 he undertook the stage premiere of Maddalena at the Graz Festival (Austria). The opera has been included in the repertoire of the Saint-Louis Opera (USA) and the National Opera in Helsinki (conducted by Gennady Rozhdestvensky).
Gennady Rozhdestvensky is also to be credited for the revival in interest in Prokofiev’s early opera in Russia. The conductor produced the first-ever recording of Maddalena on record (1986); in September 1987 the opera was performed on All-Union Radio. The first concert performance of the opera in the USSR took place in December 1988 at the Moscow Music Experimental Theatre, while it was fully staged at the State Academic Bolshoi Theatre of Belarus (1989). This was followed by productions in Moscow and Samara and a concert version at the Mariinsky Theatre in 1999 under the baton of Valery Gergiev.
Iosif Raiskin