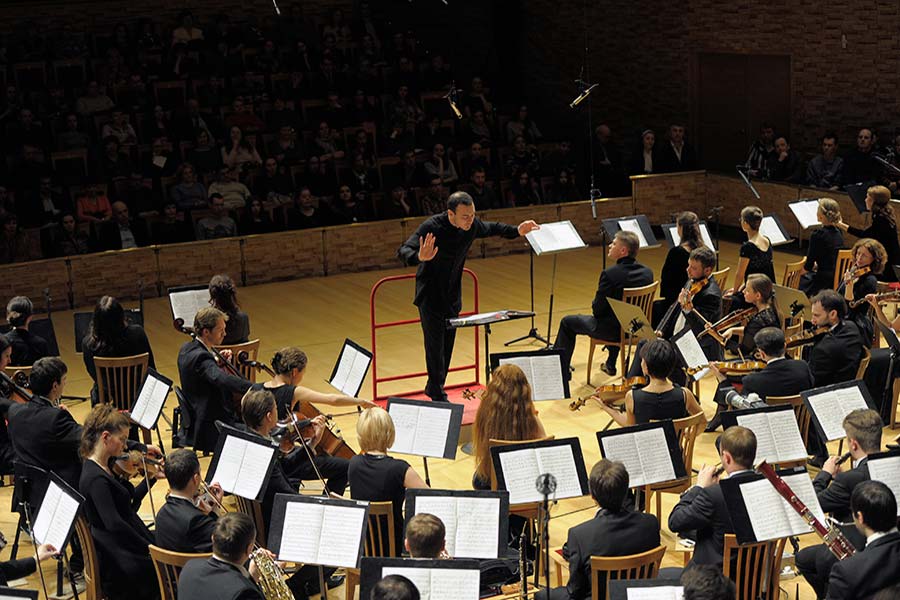 opera in three acts and an epilogue (concert performance)

The action takes place in a Soviet village after the war.
Act I
Peasants on the collective farm are sitting around idly; it is raining and it is impossible to continue work in the fields. Volodya Gavrilov, Natasha’s fiancé, returns home to the village. He has studied and worked in the city. The lads in the village give him a cool reception. The subsequent fight is stopped by the chair of the collective farm Varvara Vasilievna. All take their separate ways. Varvara is overcome with doubt: she is strict with those she manages, but she cannot control the weather on which the harvest depends. Speaking with Volodya, she tries to discover his plans as there is insufficient manpower in the village.

Act II
The young people assemble for an evening of festivities. The girls and the boys, competing against each other, sing limericks. Representatives of the collective farm’s initiative group appear, performing an awkward march after which Gavrilov speaks. The gloomy moralists from the initiative group scorn everything that is urban, and amid the accusations is the retort “Muddle instead of music!” Volodya sings lyrical couplets with the girls. Varvara has come for the quadrille which she dances with Volodya to whom she has taken a fancy. After the festivities, Varvara anxiously returns home, followed by Volodya who does not hide his feelings (“I’ll smother you with kisses, you lie, you won’t get away.”) The dialogue is interrupted by the brigadier of the tractor-drivers Fedot Petrovich. Varvara drives her protector away and she and Volodya agree to meet.

Act III
On the way to her rendezvous, Varvara bumps into Natasha who sings the nostalgic song The Hazily Beautiful Sun. The chair gives her usual commands, giving her rival her marching orders. But as she awaits Volodya she begins to doubt her own actions. She hears the words of a limerick which one of the village girls sings: “Oh, how quiet is the night, not far from sin. Let me be escorted by another’s fiancé.” Varvara is like a fish out of water: she dreams of happiness, yet she cannot abuse people’s trust. Keeping her anxiety in check, the chair announces her instructions and tells Volodya his duties and slowly she comes to understand that the lad never had any serious intentions. Before her lies another day of cares and hard work.

Not Love Alone is Rodion Shchedrin’s first opera, composed in 1961 and dedicated to his wife Maya Plisetskaya. In concert, the symphonic suite produced from material of the opera in 1964 at the request of conductor Kirill Kondrashin enjoyed great success. In the “collective farm Eugene Onegin” (Shchedrin) the composer made use of many ditty-like wordplays while the libretto included texts of contemporary limericks.
The ditty – a genre of brief refrains, running feuilletons and poster-like satire – had been seized upon by Shchedrin while still a pupil at the Moscow Conservatoire, when as a student he undertook a folklore expedition to Vologodchina. The ditty motifs of the opera are varied in character and inventive in their melodic and rhythmical structures: here there is lyrical suffering, almost in the style of lengthy folk songs, as well as more modest refrains with definitively heartfelt intonations. “In Russian folklore humour, pranks and strong rebukes are always but half a step away from despair, from an outburst, from wailing, from tears,” says the composer. By ridiculing Soviet obscuritanism, Shchedrin gave voice to one of the characters (a representative of the collective farm’s initiative group) relating to the sacramental 1936 Pravda headline: “Do you think we are fools? Are you whistling or bellowing? Muddle instead of music!” It was a risky step, because in 1961, when the phrase resounded from the stage of the Bolshoi Theatre, Shostakovich’s Lady Macbeth of Mtsensk had not yet been rehabilitated. The performance was conducted by Yevgeny Svetlanov, and the sets designed by Alexander Tyshler. The opera was performed just four times. In 1972 Boris Pokrovsky opened a new experimental venue – the Moscow Chamber Music Theatre – with the opera Not Love Alone. For that production Shchedrin created a new orchestral version for eleven instruments. In 2014 the opera was staged by Yuri Alexandrov at the St Petersburg Chamber Opera Company. At the Mariinsky Theatre Not Love Alone is being staged for the first time.
Leila Abbasova

The plot of the opera was taken from the tale Aunt Lusha by contemporary Russian writer Sergei Antonov. The tale narrates the life of a commonplace Russian village soon after the end of World War II. The men have been killed at the front and only young men – boys, really – remain in the village; in my youth I saw such villages with my own eyes. The heroine of the opera, the now not-so-young Varvara (the author of the libretto Vasily Katanian and I changed her name), falls desperately in love with just such a young man who is still half a boy. The loving languor, sexual desire, the unspent maternal tenderness, secret meetings, the village love triangle (the boy has a fiancée the same age in the village), the stormy conflict and the dark and gloomy denouement is a sad finale. The village is again immersed into day-to-day tedium. The text of one of the limericks literally sums up the main idea of my opera: “Oh, mother, my mother, what should I do with my love? Scatter it in the field or bury it in the earth?” <…>
The premiere of my opera Not Love Alone took place at the Bolshoi Theatre in Moscow on 25 December 1961. The production resulted in severe irritation from the bosses in charge of culture – the openly Freudian motifs together with the monumental patriotic processions of other Soviet operas, red banners and glorification proved to be too much of a challenging contrast. The planned next four performances were replaced with Verdi’s La traviata, and it was only two months later that the opera was shown to the public another three times after which it quietly and ingloriously vanished from the repertoire.
Rodion Shchedrin