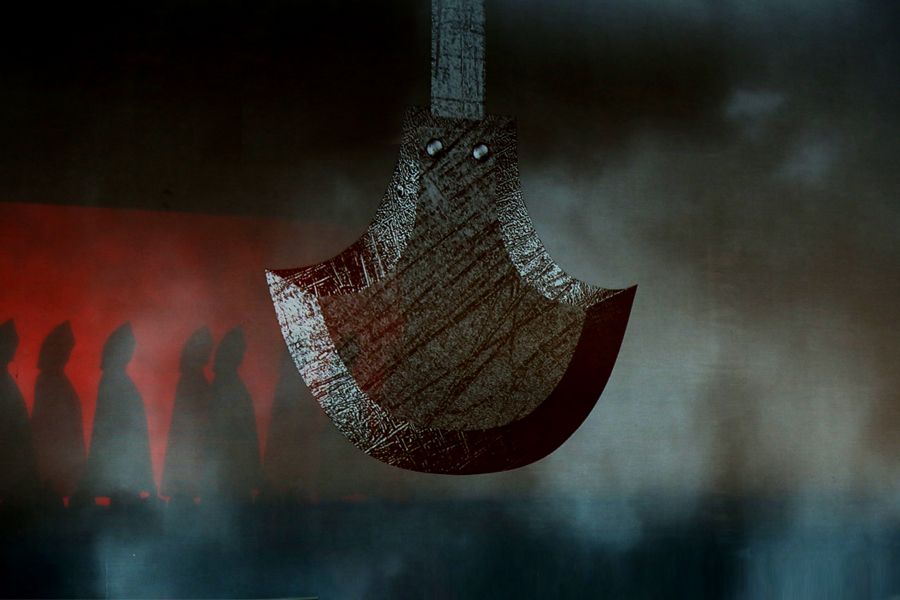 Act I
Moscow in the 16th century. It is a time of relentless struggle between the noble oprichniks headed by Tsar Ivan the Terrible and the boyars’ domains. Andrei, the son of the boyar Morozov, is stuck between these two irreconcilable forces. Family traditions and the influence of his imperious and stern mother link him strongly to the boyars. Yet there is a force compelling Andrei towards the oprichniks – the thirst for revenge on Prince Zhemchuzhny, who brought the Morozovs to ruin. Andrei has a deep love for the prince’s daughter Natalia, to whom he was engaged when both families were still living in peace and friendship.

The garden of Zhemchuzhny’s home. The prince proposes that his daughter marry the boyar Mitkov: he is pleased that the old man, head over heels in love, demands no dowry. But Natalia is not the kind to let her fate be decided without her own involvement. From childhood betrothed to Andrei Morozov and in love with him with all her heart, she bursts out of her father’s stuffy terem to meet the friend she wishes to see. Her father has cruelly scorned the Morozovs, but Natalia remains true to Andrei. In order seek justice from Zhemchuzhny, avenge his ridiculed father and save Natalia, Andrei has agreed to become an oprichnik, submitting to threats from his friend, the oprichnik Basmanov.

Act II
Scene 1
A hut in semidarkness to which Andrei and his mother have come following their ruination. An anxious love for her son, wounded pride and dark malice seethe in the boyarynya Morozova’s heart beneath a veil of humility and obedience to God’s will. Most of all, the elderly boyarynya detests the oprichniks. Andrei returns with money he has been given by Basmanov. Morozova does not wish to accept assistance from an oprichnik. Trying to appease his mother, Andrei must hide from her his intention to go to the tsar and become an oprichnik himself.
Scene 2
The Alexandrovskaya Sloboda, the tsar’s chambers. Andrei Morozov is being received into the ranks of the oprichniks. Mustering up all his courage, he gives a terrible oath of loyalty: to reject the boyars, friendship, family and his beloved mother. It is with joy that Prince Vyazminsky who is close to the tsar sees he has doubts; he hates the entire Morozov family and is already planning a trap for Andrei in his mind.

Act III
A square in Moscow. Natalia, who has fled her father’s home, asks Morozova for shelter and protection from her loathsome fiancé. The old woman refuses to help her. The fugitive is caught by her father who is enraged at her taking such liberties. Prince Zhemchuzhny orders his servants to tie up his daughter. Led by Morozov and Basmanov, the oprichniks arrive in time and free the girl. Only now does Morozova realise that her son has become an oprichnik and she curses him in fury. The shocked Andrei decides to entreat the tsar to allow him to leave the oprichniks.

Act IV
The Alexandrovskaya Sloboda. The oprichniks are merrily celebrating the wedding of Andrei and Natalia. Natalia’s heart knows little peace. Although the tsar has allowed Andrei to leave the oprichniks, in line with tradition the youth must remain true to his terrible oath until midnight. If only midnight would come sooner! But before it arrives Andrei’s fate is decided. Prince Vyazminsky brings him a decree from the tsar: the tsar demands the beautiful Natalia be sent to him. In vain Basmanov tries to convince Andrei that this is just a test of his loyalty. Andrei refuses to carry out the tsar’s orders and in so doing breaks his solemn oath. On the square, in front of the windows, the executioners erect their scaffolding. The chamber empties. The triumphant Prince Vyazminsky ushers in Morozova and beckons her to the window – to see her son. On seeing Andrei being executed, Morozova drops down dead. The gloomily triumphant chorus of oprichniks praise the terrible tsar.

Running time 3 hours 15 minutes
The performance has one interval