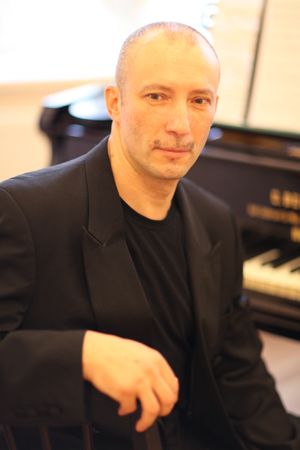 In 1986 Viktor Vysotsky graduated from the Leningrad State Rimsky-Korsakov Conservatoire (piano class of Elena Shishko and composition class of Sergei Slonimsky) and in 1994 he completed a postgraduate study at the Russian Institute of the History of the Arts.
In 1991 he made his debut as a composer with the opera The Witch of Lefortovo (Zazerkalye theatre). That same year he began to work in the music department of Leningrad TV as Deputy Editor-in-Chief. In 2002 he produced his own original version of Mozart’s opera Die Entführung aus dem Serail for the Helikon Opera.
As a pianist he has performed at the St Petersburg Philharmonic, the St Petersburg Cappella and the Berliner Staatsoper among other venues. In 2006 he gave a recital at the Villa Wahnfried in Bayreuth.
Has produced the concert projects A Menu after Rossini, Tchaikovsky’s Mozart and Three Mozarts.
Has presented his own series of eight programmes entitled The Secret of a Fateful Work and a programme about opera premieres of the Mariinsky Theatre for Petersburg Channel 5 TV and radio company (2000). Wrote the documentary film The Creation of Shostakovich for Kultura TV (2006). From 2007–2010 he hosted the programme The Territory of Music on the 100 TV channel.
In 2008 he made his debut as an opera director, staging the opera Richard the Lionheart at the Mikhailovsky Theatre. He has also staged the operas La vestale, The Demon, Faust and The Golden Cockerel at the Opera for All festival, the opera Don Pasquale at the State Hermitage Theatre and the musical Jolly Fellows at St Petersburg’s Music Hall.
From 2007–2010 he was Artistic Director of the philharmonic music department of St Petersburg Concert, and from 2010–2014 he was Artistic Director of the festivals Under the Aegis of Spring, Petersburg-Rome. A Time of Capitals, Petersburg-Berlin. A Time of Capitals and Opera for All.
Since 2014 he has taught the lecture series A Sunday Foreword with Viktor Vysotsky at the Mariinsky Theatre.
Teaches at the faculty of opera directing at the St Petersburg Conservatoire.
In 2015 at the Concert Hall of the Mariinsky Theatre he staged Tchaikovsky's opera The Oprichnik. Last season at the Mariinsky II he ran the lecture series A Literary Hero in the “Distorting Mirror” of Opera.