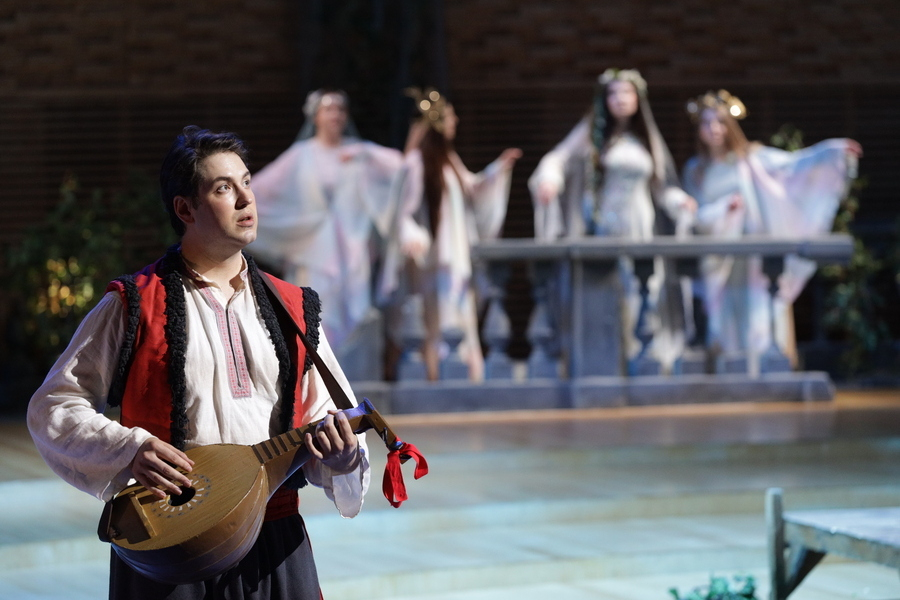 Act I
A clear May evening. On the street in a Ukrainian village some boys and girls are playing a game of Millet. They are passed by the young Cossack Levko. He is hurrying to his beloved Ganna. With a gentle song, he calls on her to come out for just a moment from her peasant house.
The comely, dark-eyed maiden has caught the fancy of the lad, and Levko is very dear to Ganna. There is just one obstacle – the Village Head, Levko’s father, is digging his heels in and has forbidden the marriage. Dusk falls. The lake water splashes gently in the distance. On the shore, an old, semi-collapsed estate house is cast into gloominess. Ganna has heard that a terrible story is connected to this house. Levko should tell her. “It was long ago,” Levko begins, “A Cossack lieutenant lived in that house, he had a beautiful daughter. The widowed lieutenant married a young woman and she hated her stepdaughter and forced her husband to drive her from the house. In grief Pannochka threw herself in the lake and became the Mermaid. Together with her friends she seized her stepmother and dragged the wicked woman to the depths. The lieutenant’s wife was a witch and transformed into another mermaid, leaving Pannochka unable to recognise her. Ever since, on moonlit nights the mermaids have come ashore. If they see a human, they force him to guess who the witch is.
Darkness falls. It is late – Levko and Ganna separate. Young girls come onto the empty streets. Their songs are interrupted by the appearance of the drunken Cossack Kalenik. He is mad with the Village Head and that powers exist to abuse him. This is all nothing to the heavily drunk Kalenik: “I am master to myself,” he affirms continually. There is just one problem: the drunken cannot find his way home. Laughing and joking, the girls send Kalenik to the Village Head’s house.
It transpires that not without reason is the landowning Village Head resisting his son’s marriage to Ganna. Taking advantage of the darkness, the old man steals into her house and plagues her with declarations of love. In indignation, Ganna drives the old cripple away. She tells Levko all. And Levko, who has already suspected something amiss, together with his friends has lain in wait for the Village Head and decides to teach him a lesson. Levko’s merry and provocative song resounds throughout the sleeping village about how the dishonest Village Head has “a few tiles loose”.

Act II
Scene 1. The Village Head and his Sister-in-Law are talking with their esteemed guest – the Distiller. He has come to the village in order to build a distillery where the lieutenant’s house stood. The drunken Kalenik unexpectedly appears. He is behaving like the master in someone else’s home and abuses the Village Head with passion. The furious Village Head wants to throw the impertinent fellow out, but suddenly the window is broken and a stone flies into the room. The Village Head hurries outside and soon returns triumphant. He has caught the evildoer, dressed in an inside-out sheepskin. It is Levko. Seizing an opportune moment, the lad extinguishes the light and flees. In the darkness, the Village Head seizes his Sister-in-Law and shoves her into the store-room. The Clerk appears. He has come to the Village Head to inform him of the joyful news: the principal trouble-maker who reviled the authorities has been caught and locked up in prison. The Village Head is certain that he himself has caught the miscreant. In order to prove the truth of the matter to the Clerk, he opens the store-room and his Sister-in-Law runs out, showering the hasty Village Head with a torrent of abuse. Ignoring his excuses, she runs into the street and soon her cries for help can be heard. The Village Head pays no attention whatsoever. Together with the Clerk, the Distiller and the peasant policemen, he rushes to the prison to punish the arrested youth as an example.
Scene 2. The Village Head, Clerk and Distiller are seized with superstitious fear. Peering into the lock, they see the Sister-in-Law in the prison. And accompanied by none other than Satan. They must set light to the straw roof and destroy the Unclean by fire. The frightened Sister-in-Law begs to be let out. In the end, the Clerk dares to open the door and the infuriated Sister-in-Law once again attacks the Village Head.

Act III
A peaceful May night. The moonlight shows the lake, the semi-derelict estate house and a garden run wild. Levko enters, carrying a bandura. Tenderly, he thinks of Ganna, and desires his beloved to be enveloped in a sweet, sweet dream: “happy fate with a dear friend”. The window of the lieutenant’s house bursts open and Pannochka appears. The mermaids come ashore from the lake. They perform round dances and play games. Levko fulfils Pannochka’s request – he identifies the wicked stepmother, and the mermaids drag the witch to the bottom of the lake.
The delighted Pannochka gives Levko a note for the Village Head and wishes him happiness with his beloved. It is beginning to get light and the sun rises. The Village Head, Clerk, Distiller and peasant policemen appear and throw themselves upon Levko in order to tie him up. The boy gives his father the note. It is an order from the Commissioner for Levko to marry Ganna. The lovers joyfully come together. Now there is nothing to hinder their happiness. All sing a triumphant hymn to bride and groom:
Glory to the beautiful sun!
Glory to the topping young man and his lady!

The co-creators of May Night were men of equal import: Gogol and Rimsky-Korsakov. It is a poetic opus wrought by youthful forces: Gogol wrote his May Night as a twenty-year-old young man, while for Rimsky-Korsakov it was to be only his second opera, and on the day of the premiere the composer was not yet thirty-six years of age.

One December evening in 1871, the happy and newly-betrothed Nikolai Rimsky-Korsakov and Nadezhda Purgold read aloud Evenings on a Farm Near Dikanka, including the particular favourite of May Night. The bride-to-be could see the "operatic" nature of the plot clearly from the very first. It was Nadezhda, the composer's wife already six months later, who on several occasions reminded her husband of Gogol's story. In 1877 Rimsky-Korsakov finally sank his teeth into the matter. The composer was particularly well prepared in his approach to May Night. Behind him lay extensive studies in counterpoint (when teaching his students, the young professor of the St Petersburg Conservatoire had also undertaken an intensive study himself), working with Glinka's scores and researching, recording and arranging folk songs. All of this bore fruit in May Night, written by an already mature hand; here there is everything for which Rimsky-Korsakov is so admired: a rich and subtle orchestral palette, pliant melodies with recognisable arrangements of folk songs, echoes of early pagan rituals, its delightful picturesque quality (take Ukrainian Night preceding Act III alone), the humour... Here for the first time we also see a particular Korsakovian female character: a fragile, ethereal, fairytale-like beautiful creature – Pannochka, to be followed in due course by Snegurochka, the Swan Princess, Volkhova...

It was at the Mariinsky Theatre in 1880 that audiences first saw May Night. This is an anniversary production: it was staged in 2009 to mark two centuries since the birth of Gogol. Alexander Maskalin's beautiful chamber production remains faithful to the original: the director does not enter into polemics with the work's great creators, instead creating a comfortable stage arena for them. The production makes use of the performing prowess of the Mariinsky Academy of Young Opera Singers. The tenor role of Levko is central to the entire work; this is a rare case for Rimsky-Korsakov (among others), where in an operatic love story the emphasis is placed not on the girl but on the boy. The reason for this is possibly that the composer was experiencing the very same sensations felt by the hero of his opus. The opera is, after all, dedicated to the composer's beloved wife. Khristina Batyushina